So the next recipe that I made while in Texas was chicken Marsala.  I actually was going to make a different version of this, then lost the recipe.  But I found this one and it was pretty good, so it all worked out in the end! 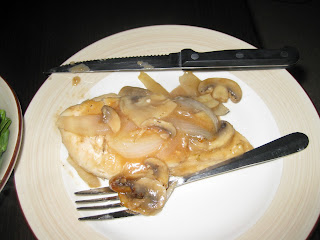 And here is the recipe that I used:

I didn't make a whole lot of changes to this.  The one pick change was that I increased the amount of sauce that I made as well as the number of mushrooms.

For the sauce, I just added Marsala wine, but I added slightly more than 1 cup of it.  I probably also added about 2 cups of mushrooms.  In addition I added about half of an onion at the same time that I added the mushrooms.

So the first step was to coat the chicken in the flour mixture.  To do this I used an ingenious technique that one of the comments gave.  I mixed everything in a large Ziploc bag, shown below, and then one by one I added the chicken breasts and coated them.  It worked so great! 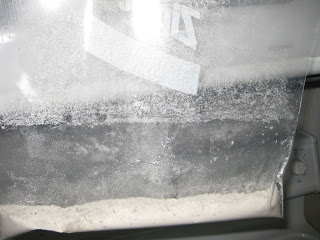 Here are the chicken breasts all coated and ready to cook. 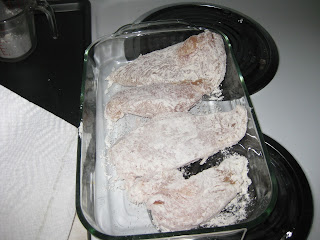 Next I melted the butter in the pan and added the chicken.  I really only have one frying pan, so I was a little worried about the size, but everything worked out. 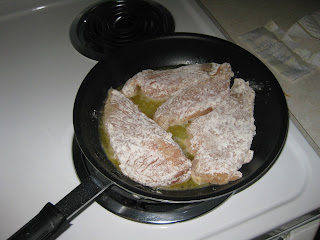 Once the chicken was done I added the Marsala wine, mushrooms,  and onions to the mixture and cooked it up. 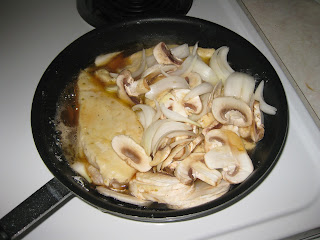 I then covered the skillet and let it cook for 10 minutes, stirring it occasionally, and viola! The meal was done! 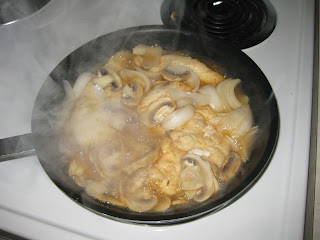 This was a really simple recipe, but I think that it turned out great.  The onions were definitely a good touch, and I guess that I don't know what the sauce was like with Marsala wine and Sherry, but with just Marsala it was pretty great.
Posted by The Elephant at 7:32 PM No comments:

This past weekend a couple of friends from back in my undergrad days (Scott and Nick) came down to Austin, and since they wanted to sight see I took advantage and tagged along.

Friday night we drove down to San Antonio and walked along the River Walk, which is located in the downtown area.  I have always heard about the area and it has looked pretty nice when I have seen pictures.

So getting to the area is actually a little sketchy from some parts of town.  In the area that we walked down there were a lot of homeless people milling around... and it just made me wonder how sketchy the river walk was going to be, considering it was down stairs.

My fears were soon allayed as we walked down the stairs, it was actually really really cool.  The river is sort of a slow meandering channel and both sides have shops and bars and restaurants.  Here are a few pictures to give the general view of it. 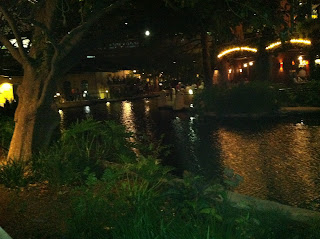 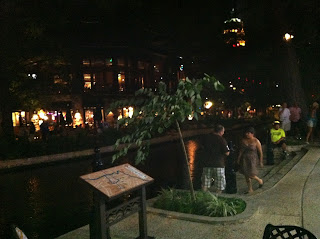 We stopped and got some ice cream and then sat my the river and people watched for a while.  Then we walked further down until  Scott asked someone how much further we should go.  He recommended that we turn around since "All of the girls with the short skirts are that way".  I was a little skeptical of any advice worded these way.... and it didn't really prove to be worth much, but we found a bar and sat and had a drink.  Nick ordered a watermelon juice, which they were out of.... he then ordered the fresh squeezed limeade... which in San Antonio apparently means Sprite with flavoring.

We were all fairly tired so we headed home around 11:30 or 12 and prepared to wake up early to go see the Alamo and then head to the coast.

We managed to barely roll out of bed by about 9:30 so that we could take advantage of the free breakfast at the hotel and then headed out.

We parked and headed to the Alamo.  I had read that the Alamo wasn't the most impressive mission in San Antonio, but it certainly has the most history... well... at least it has the catchiest slogan.

Right outside is the Monument to the fallen at the Alamo.  And there is Davy Crockett!  He is the one on the right carrying the coon skin cap!  I really wonder if he actually wore that hat or is it's just a legend and so they had to put that in the statue.  It seems like those hats would get really scratchy after a while. 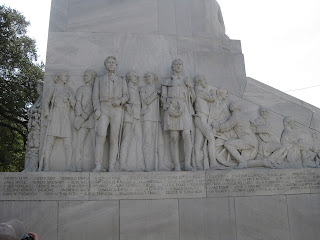 And there around the corner was the Alamo!  It was a lot smaller than I had been expecting really.... I guess most of the fighting was done in the grounds around this little mission, but it still seemed so small.  We couldn't take pictures inside, but they had items that had been collected or donated.  Some of them were really cool, such as Davy Crockett's rifle.  I am not sure how they actually got his rifle, but if they did then it is really cool. 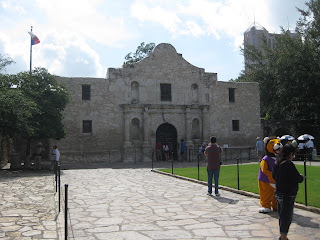 Outside they were having a festival that was celebrating the Tejano heritage.  Tejano is Spanish for Texan, and is used to represent Texans of Mexican or Spanish descent.  A lot of the people who fought and died in the Alamo and the Texas revolution were Tejano, which I didn't actually know before this trip, so that was cool to discover.

I am not sure what a big dancing blue bear had to do with anything, but they had one there. 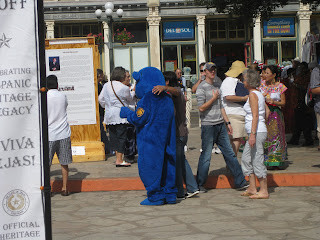 After walking through the mission we walked around a little bit more and I read about the events that happened leading up to the battle and then all about the revolution.  I think Scott might have gotten a little bit annoyed with me.

Here he is with a cannon that was used in the battle in the background.  He doesn't look particularly thrilled to be waiting for me. 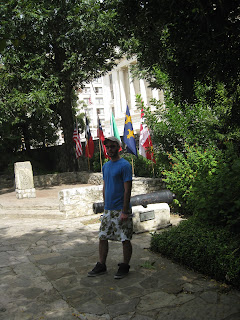 In the grounds, they also had this cool tree that was the first live transplanted tree ever! (at least in San Antonio)  It was a really cool tree. 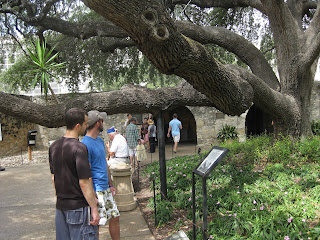 The grounds also had a monument that Japan had donated and flags from all the countries who had citizens that died at the Alamo.  For example, there were two Scottish people who were involved.  I can't imagine how they found their way to Texas though... that seems far away from Scotland.

Here is Scott and I outside the Alamo! 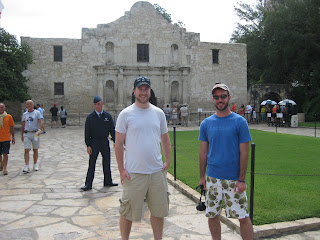 After that we headed off to Corpus Christi and the gulf of Mexico.  Scott was really excited about swimming in the Gulf of Mexico and I thought being on the beach for a while would be nice.

We went to Malaquite beach on Padre Island, which was amazing.  Here is a link to a panorama of the place.

The water was really great, it was just about the perfect temperature.  It was a little bit salty and after being in it a while my eyes were pretty stingy, but it was still a great time and a great trip.

Posted by The Elephant at 9:45 PM No comments: