In honor of Mardi Gras I decided this week to make something from New Orleans.  I have also run into several recipes that require frying, which is something that I have never done on the stove top.  This seemed like an easy enough recipe to serve as my introduction to frying, and something that I have been wanting to try.

Here is the recipe that I tried:  Po Boys


So, I searched all over the store and was not able to find Kikkoman Ponzu Lime... It actually claims to be a very high percentage of that sauce.  Anyway, since I couldn't find this I figured I would try making it without it and I would also hedge my bets and buy a bottle of Remoulade Sauce, just in case mine turned out really awful.

I think the directions on this are a bit off, or at least for me they were.  I wanted everything to be ready before I started the deep frying process.  So the first thing that I did was prepare the shrimp.  The recipe does not really specify how to prepare them, so I chopped the tails off since I figured that would make them easier to eat in sand which form.  I think this is key.  It does make the breading process a lot messier, but much easier to eat. Anyway, once I got the shrimp ready, I set up my station.  I mixed the flour and creole seasoning, which made me cough a lot, mixed my eggs and poured out the bread crumbs in a bowl. The picture below kind of shows this. 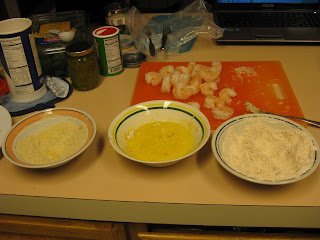 This was a really messy process and I kind of found myself wishing that I had left the tails off.  But I pushed onward  The first few were a little but uncovered, but I got better as I went along.  I did not get cleaner, as it was messy throughout. 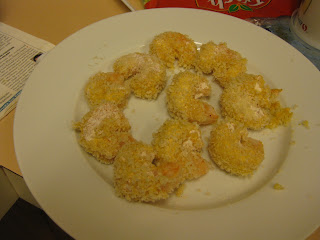 Once I was done I had a very large plate of breaded shrimp.  Then it was time to start frying! 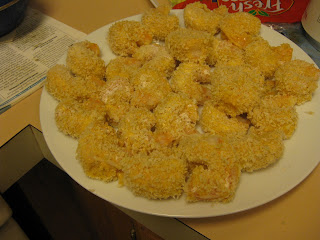 This link was very helpful to me as it described exactly what I would need to do: Deep Frying

This ended up taking a lot more oil than I was expecting, but I poured in in and waited.  I didn't actually have a thermometer that I could measure the temperature with, but one hint on the Internet is to drop a few droplets of water in the oil and if it starts to make bubbles then it is ready.

So I took a long wooden spoon and slowly lowered several of the shrimp into the pot.  Soon it was frothily bubbling and... I suppose deep frying. 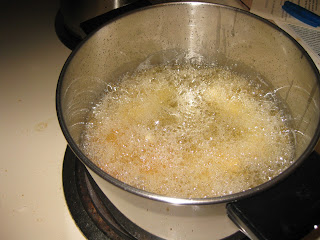 To tell when they were done I just waited until the floated to the top of the oil.  Then I scooped them out and set them aside. 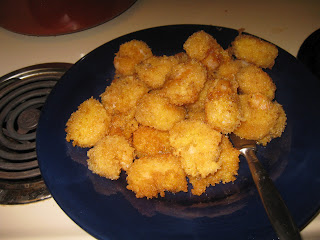 Finally once the shrimp were down I prepared the buns and the sauce.  The buns just included a light garlic butter and then a few minutes toasting in the oven and the sauce was just mixing the ingredients shown above. 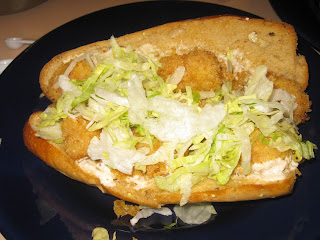 I did a small taste test comparing the sauce that I made and the one that I bought.  Even without the Ponzu Lime I liked the homemade sauce a lot better.  So then it was time to place the shrimps and shredded lettuce and eat dinner!

The first one was a little hit and miss, I think that I didn't get enough of the oil off the shrimp, but I really liked the combination of the sauce and the garlic butter and the sauce.  The second one (the next day) was a lot better as I think the oil had a chance to leave the shrimp at least somewhat and that taste mellowed out.  The end result was a very good sandwich.

Now it should be noted that there is no time on this recipe.  The whole process took me probably about two hours just to cut and prepare the shrimp and then fry them.  It would probably go faster, I just wanted to make sure I didn't mess up the frying as it was my first time.  Also Deep Frying takes a fair amount of oil.  Several cups at least was required.
Posted by The Elephant at 5:02 PM 4 comments: