So we weren't really sure if our beer was totally ready, but it had been a week and it was recommended to wait about a week and then maybe wait a little longer, but we were really excited about trying it and there was a blazers game on, so we combined the game with our first tasting.

We stored the beer in the fridge had a beer to whet our palette. Then an hour later it was time to try it. Here we are pouring ourselves our first glasses. Pictures courtesy of Chris B, who is not pictured. 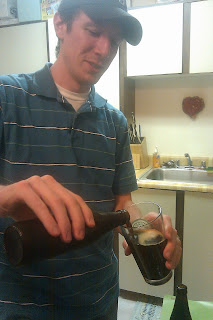 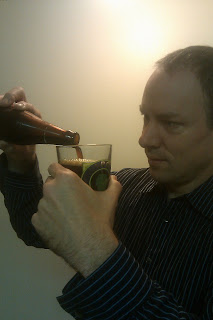 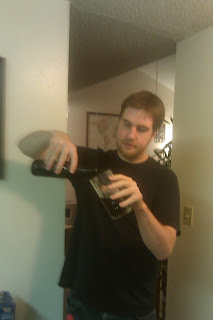 I was a bit nervous about it, I was worried that it was going to not be all that good. I was pretty sure that I would still drink it, since we had went through a lot of work to make it and I had sat with it as it burbled and carefully counted each burble as it happened... well not each one, but pretty close.

Anyway, .... It was great! I am not sure how to describe it, but it is beer and very drinkable and I found myself saying that I would maybe even buy it from the store. I still don't know how alcoholic it is, based on the hydrometer, I think it is probably about 4.5% or 5% maybe? Andrew was the one who thought that it tasted the worst when we first tried it and he was impressed by how much better it was and how much it changed.

I have handed out some of the beers already and we have gotten a few reviews back, which are below. If I have given you one of our beers and you would like to share a review you can leave a comment or email it to me and I will add it below:

My Dad:
"It was good. It was malty. Excellent chocolate stout. Good buzz, alcoholic content must be higher than advertised."

Anonymous Review 2:
"It is good.. it's not easy. I do not really know how to describe it..well the only thing I am pretty sure is that I would definitely be willing to pay to get this beer.. I think it tastes a little chocolaty and a little sweet."

Anonymous Review 3:
"I would definitely buy it in a store! It was rich and creamy, with a hint of coffee and chocolately taste to it, not hit you over the head chocolately like at Block 15, but a subtle natural hint of chocolate that I really liked. The aftertaste was a little bitter and lasting, but not bad at all, while the middle and end notes were fantastic"

We still have a few beers left for sharing so if you would like to try one let me know and we will see if we can work something out.
Posted by The Elephant at 10:36 PM No comments: