Continuing my backlog of events, on the weekend of August 19th all of my roommates finished their internships.  This meant that I had the place to myself! Well.... after I drove them to the airport.  On Saturday morning I had to wake up at around 5 to drive Kyle to the airport, and then on Sunday I had to be up at 7 to drive Jacob to the roommate.

This sort of decreased my energy level to do anything during the day.  Saturday I did some shopping and then Sunday I decided to go to a Round Rock Express baseball game.  The Round Rock Express are the triple-A team for the Texas Rangers so they had a fair amount of prospects and I actually lucked into being able to watch one of their top pitching prospects, Martin Perez.

Eric told me that their stadium, the Dell Diamond, was one of the best stadiums in all of the minor leagues.  I haven't been to that many minor league stadiums, but it was very nice. Below are just some pictures of the stadium and the game.

This is the view of the outfield and the bullpen. 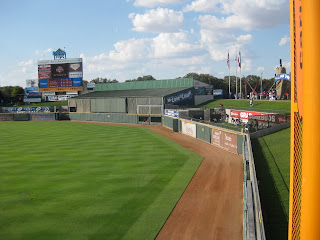 The view, albeit blurred by the sun, from the outfield seats.  The sun was pretty strong for the first couple of innings.  The majority of the people sat on the third base side, which was in the shade. 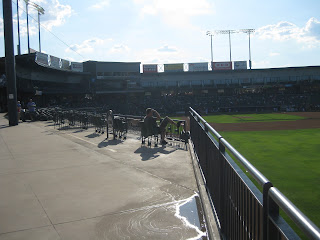 However, I was able to get awesome seats by sitting on the first base side.  2 rows behind the dugout!!  I think those are about the best seats that I have ever had at a baseball game.  The Express were playing the New Orleans Zephyrs, the farm team for the Florida Marlins, so I was right behind the New Orleans dugout.  I thought this was pretty fitting considering that I was planning on going to New Orleans with Katie and Will after my internship. 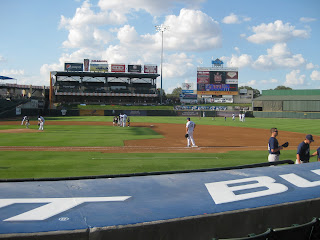 The game was pretty much a blowout.  The Zephyrs scored 6 runs in the first 2 innings and pretty much ran away with the thing, but all in all it was a fun game to go to.  Particularly after the sun went done and I didn't have to worry about getting sunburned. 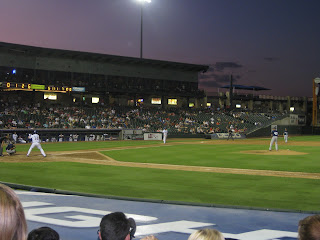 One thing that I noted was that the Express had a lot of players who had been in the majors with one team or another, but weren't good enough to stick.  So the proverbial AAAA player.  I was able to see Chris Coghlin and Logan Morrison for the Zephyrs.  I guess they were rehabbing injuries.  However, Eric and I made a bet regarding Coghlin, so seeing him basically assured me of winning $5!
Posted by The Elephant at 8:54 PM 1 comment: