So the Thanksgiving holiday has come and gone, and with it came my typical trip to my parents house. This trip marked the first time that Sprinkles would:
1) Go on a long car ride
2) Interact with other cats for a long period of time.

The car rides themselves were.... a bit loud. Sprinkles meowed a lot from her cage, but we made it safely, and I suppose that is the main point. I tried telling her everything would be all right, she just meowed a little louder. I almost let her out of her cage, but the one time I had let her do that before on the way home from the vet she managed to squeeze between my steering wheel, so I felt it would be safer to leave her in her cage.

So we got to my parents house and Sprinkles immediately set up shop on one of their chairs. At this point their cats are not inside the house, so everything is safe, and Sprinkles explores around and then lays down: 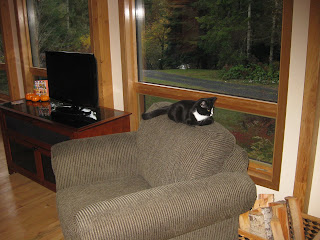 She basically stayed in that chair for the entire day. Broken only by her interaction with one of my parents cats, who came in and whom Sprinkles followed around the house hissing at until she confused/scared him enough to make him leave. At first he was interested in her because she was different, but it seemed after being hissed at he just sort of lost it and left. So Sprinkles controlled the house.

During the party, she was set up on the chair for the entire night, and everyone talked about her, but whenever anyone would go up to try and pet her she would either hiss or nip at them or hit them with her paws. It was kind of funny, people still thought she was cute though. 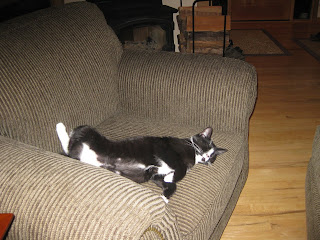 Sprinkles looking at the leftovers: 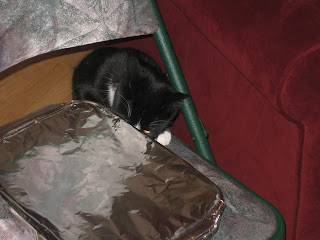 The next day Sprinkles met the other cat, who was too scared of me to come in the house, but they had fun watching each other through the window. They are very similar in marking, so it was almost like they were looking in the mirror. It was odd since she seemed to like this cat, but whenever the other cat would come by she would hiss and growl. 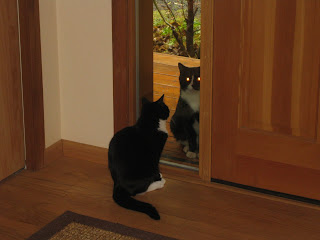 However, her dominance of the house continued and she reigned supreme on her "throne". 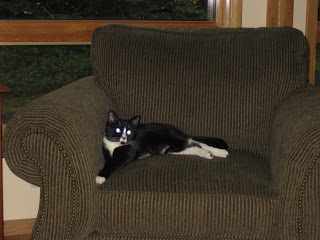 Whenever the other cat would come in, she would follow him around and make sure that he wouldn't get too comfortable. Here she has followed him to the door and he is now begging to get out. 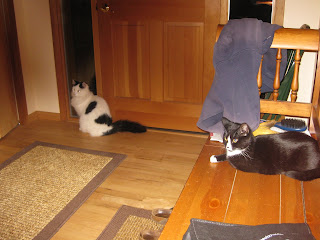 Here she corned him under the bar: 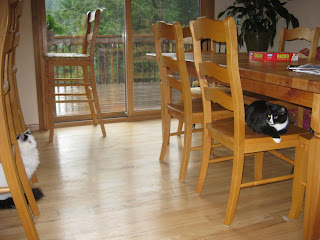 Here she stalked him while he was sitting on the scratching post. In general he didn't seem to worried about it, but he did tend to back off, by the last day, he was hissing back a little.

During my trip we also went and got our family Christmas Tree. Once we brought it inside, Sprinkles was interested and walked around in and sniffed it 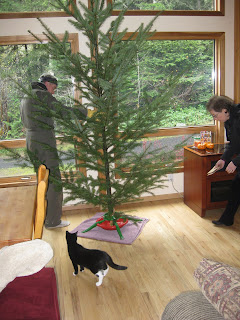 And of course... played with the water and the branches: 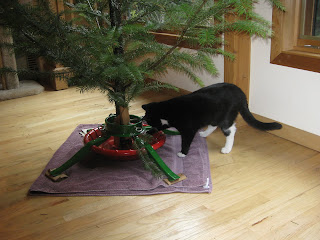 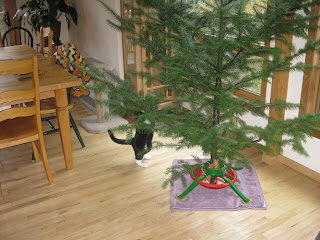 Once all the ornaments were up, she even jumped and played with them(sorry for the unnecessary tilt.)