The sound of music!!!

Instead of wasting our time at the stupid Oktoberfest, who needs beer, we met up with Chris B. and Joey and headed to Salzburg, the home of the Sound of Music with unique tours of ... stuff
from the movie!!!


First we walked around city, and to our surprise found a miniature version of Oktoberfest, which is called the Bierfestival, or something like that. We are hungry, but want real food, so we move on. 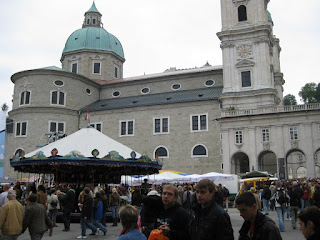 After eating we decided to see the castle instead, especially after we saw the cool stairway that lead up to it. 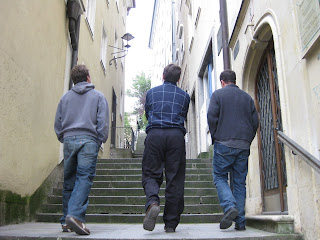 The castle was awesome, we couldn't get up to the main castle, but we saw like 4 little castles, one of which had a cool sundial, which the guys intently studied, during my panorama. 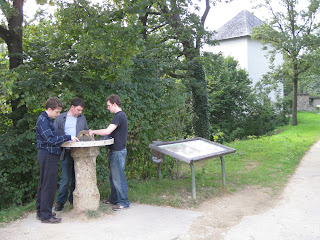 What time is it?
The panorama turned out pretty awesome, but no Julie Andrews.

After the castle we headed back to the mini-oktoberfest and celebrated. I am not sure what we celebrated, but we had a good time. Here we are with our liters of beer. 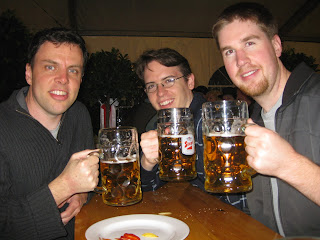 Ziggy Zaggy, Ziggy Zaggy, Oi! Oi! Oi!
Some people started dancing on tables, it was an all around awesome time, and there was beer. Eric and I are hoping to walk around Oktoberfest tomorrow, so we will see how it compares. 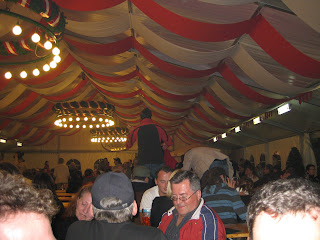 After the conference, Eric and I headed to Augsburg to visit Markus and Fabian, who kindly drove from Stuttgart to see us. It was a fun day. What follows are some pictures of the awesome trip/ bar crawl.

Our first exciting event was driving really fast on the Autobahn. I know this isn't all that great, but it was fun when we were doing it and was probably the fastest I had driven... This is a picture.... 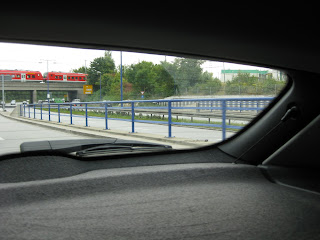 We got an old lady to take our picture as we walked around Downtown... she did an okay job, Markus was disappointed. 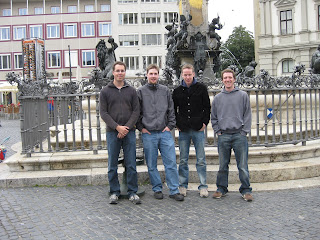 Us and a fountain

Then we went and had dinner and our first beer of the evening. We went to an Italian place and got pizza and lasagna. 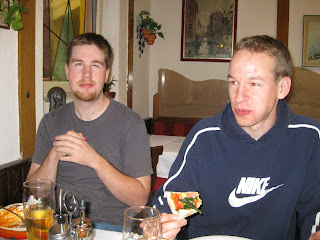 You looking at me?

Then we went to another bar, peaches, of which I have no pictures, but we got some rum, which is rare in the US. I don't want to say where it is from, or I will get arrested.... After that Eric wanted a cigar, so... we got one, from the same place as the rum, and walked around, Eric thought he looked cool, you can be the judge of that. 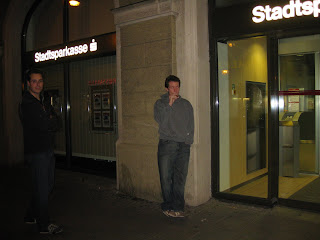 Finally, we ended our night at Enchilada, in which we had to give a rose to a bachelorette. The rose was from the bathroom, so that was exciting...

We ended up messing up the table a little bit... but we were getting checked out by a table full of girls, that was pretty awesome. 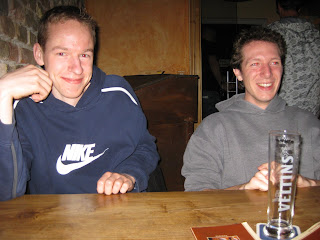 All in all it was a fun night and it was good to see my German friends again.
Posted by The Elephant at 2:30 PM No comments:

So the conference was a lot of fun... but I don't have a lot of pictures from it, so this post is kind of scraping from the bottom of the barrel.


This is on our way to the Monastery for the final reception, I believe this is probably what a cow sees everyday. 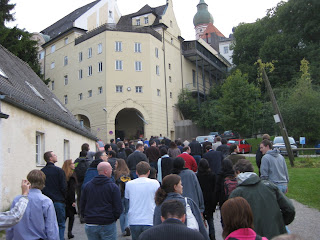 At the Monastery we got to see the abbey, or whatever, Martin seems very impressed... 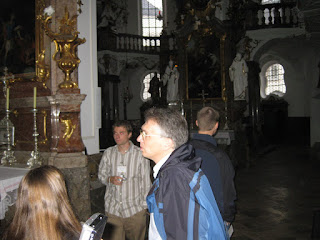 Finally we got to the dinner. We got to see lots of cool stuff, like the picture of the pope, for example, as well as drink a lot of free beer, for example. 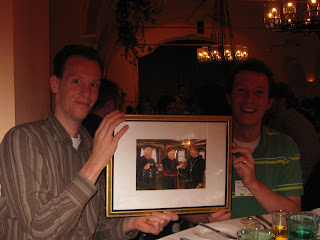 Finally we got to the meal, which was dumplings and pig and gravy, and pig skin....? It was pretty good. 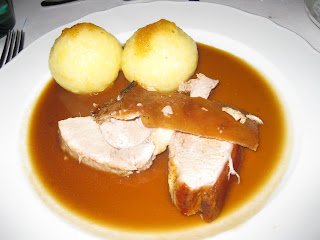 Loyal readers may have read on Eric's blog that I won the Best Paper award. Surprisingly this is true. I don't have a picture to prove it since at the time I won it, I was so surprised that I didn't get a picture, but trust me I did.
Posted by The Elephant at 2:11 PM No comments: