This weeks recipewas Irish Chicken and Dumplings! I didn't have a particular reason for this. I just looked at recipes and decided. I almost made Chicken Fried Steak, but I decided a one week break from frying might be good, considering that I just had a succesful attempt last week.

Anyway, the recipe I made was this: Link

I made a few minor changes.to this recipe. The first was that I added an extra can of cream of chicken soup. The second change had to do with the potatoes. The recipe calls for the potatoes to be quartered. But these pieces were huge, so I cut them up even more. I actually did this with all of the veggies, having the onions and potatoes in pieces that I could eat was important. I actually think that I didn't do enough cutting of the potatoes and definitely recommend cutting them in small pieces. I also ended up only using 3 potatoes as 4 was way too much. I used russet potatoes which were very large, so 4 smaller potatoes might have been fine.
The other change had to do with the chicken. The recipe calls for 4 chicken breast halfs and then to shread it. I didn't really want to go through this, so I just used regular chicken breasts. I only used 4, and I think using 6 would probably be better. I don't think that 4 was bad, but there are definitely times when I would be trying to find chicken.
I also added some garlic powder, onion powder and extra pepper to the mix. Finally, I used a different recipe for the dumplings. I also bought a mix just in case, but I used this recipe:
The recipe itself was pretty easy. It did take about 3 hours from start to prepare to actually eating it. Which I guess made it better.

Here is the pot with the chicken and celery and onions. 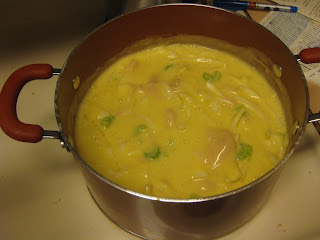 While that was cooking I got everything else ready, which was mostly just the potatoes and carrots. Here is the huge bowl ready to go into the pot. 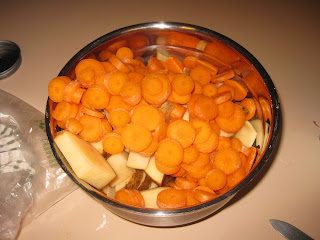 Here it is added. One note, a large pot would be good. I had a medium soup pot and it was very close to the top. If I had actually added 4 potatoes I think it would have overflowed. 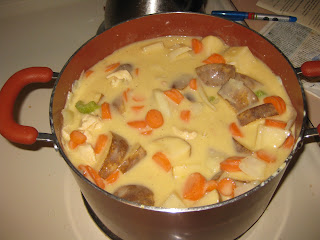 While that was cooking I mixed the dough for the dumplings and mixed it until it was dough like. 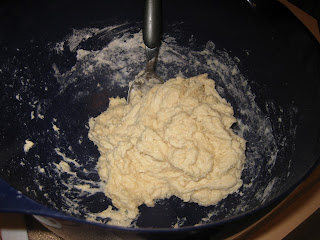 Then I just took them and made a bunch of little dumplings. 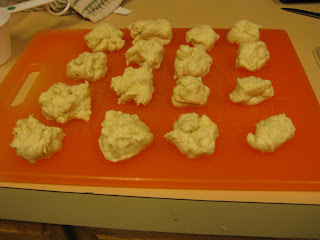 After adding the peas I added the dumplings. Most of the stuff I read said that it was important to make sure that there is space between the dumplings so they can expand and grow. One other thing, The recipe says to cook this on low, and then that it needs to be boiling by the time you add the dumplings. I started it on low, but once I added the potatoes and carrots I turned the heat up to medium, both to make sure that the potatoes cooked through and to get a good low boil going. 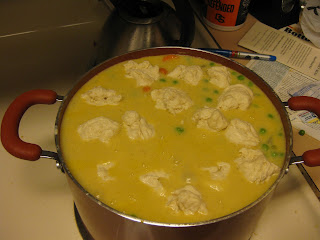 After about 20 minutes or so, this is what they looked like. There is definitely an art to dumplings. I was trying to regulate the heat, but with the pot so full it was tough. I think I did a decent job, but the dumplings where definitely a tad on the doughy side. I still really liked them though, I thought they were great. 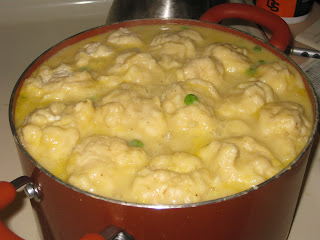 This is a picture of the first bowl of chicken and dumplings. The first two bowls were very liquidy. The ones that I had today were not nearly as liquidy. Both were really good, but I think I like the less liquidy slightly better, just because it seems more hearty. 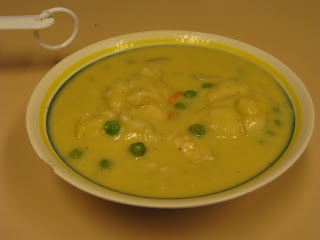