So this week's recipe was by far sprinkles favorite recipe every... like out of everything I have made, there is this recipe, would would be rated like a 100 and everything else would be in the range of 10.... she just loved the salmon.

So I made three changes to this recipe.  The first was that I added an extra egg to the salmon mixture.  This was one of the recomendations made by a lot of other users, and I think that it helped sort of hold the cakes together a lot better.
The second change was how I cooked it.  Instead of browning it in the skillet I decided to cook it in the oven.  So I cooked it at 375 for about 15 minutes on each side.  The final change was how I dusted it.  The recipe called for flour, but since I was cooking it in the oven I decided that I wouldn't use flour.  So after the first 15 minutes I flipped it and then dusted the cakes with parmesean cheese, which I think was a really good move.

So I was a little bit nervous about this recipe, mainly because it used canned salmon.  So I have used canned tuna before... but salmon... I just wasn't sure how it would go.  I decided to get the most expensive can of salmon, because I figured, I should go with the best quality.  Also it was only thirty cents more, so it didn't really break the bank.
So the one thing that I had to do that I was not expecting at all was that I had to debone the salmon.  There were still bones in the canned salmon, as well as some skin, which I also removed.  So that was kind of a messy process, but eventually I got it all seperated.  The picture below shows the end result. 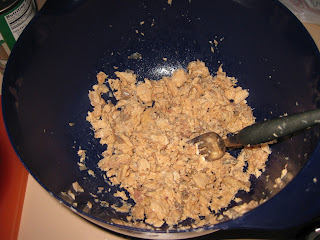 After I stated mixing the salmon stuff, sprinks got the scent and came to check it out.  She was very very intersted and I had to smack her away several times. 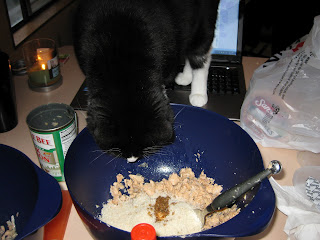 Eventualy she discoverd that I had poured the juice out in the sink..... so she leapt at that, she would paw at the juice and then lick it off her paw and then go back in for more. 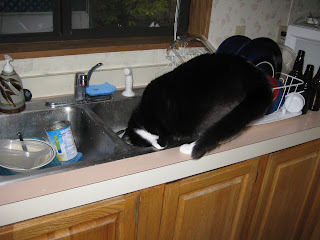 I got the cakes all prepared.  The were kind of various sizes... but I suppose that didn't really matter.  I drizzled a pan with olive oil and put the cakes on that.  Then into the oven they went. 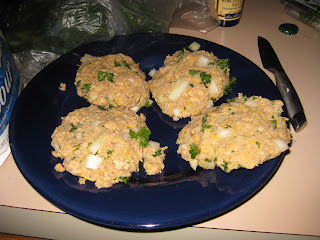 As I was working on the side dish, sprinkles kept licking her paws, savoring the taste of the salmon. 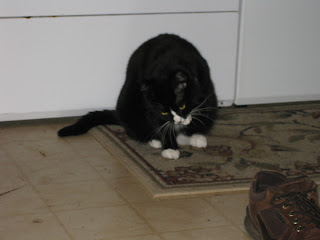 Once the salmon cakes were cooking, I started on the side dish, so I chopped up the Green Beans.  I didn't use 1.5 pounds, it was actually 12 ounces, but I think it was still a good ratio. 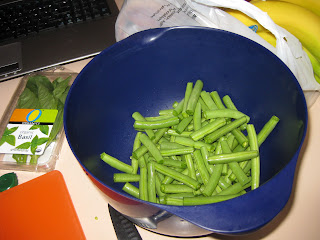 I simmered the green beans for 10 minutes and then I worked on the cherry tomatoes.  I melted the butter and mixed the basil and sugar with it. 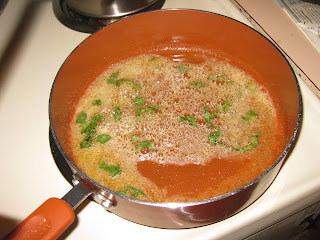 Then I added the cherry tomatoes to that. 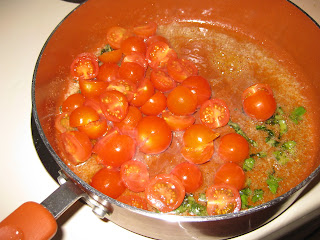 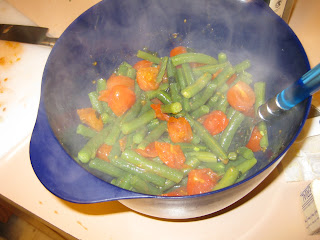 As I mentioned before, I cooked the cakes for about 30 minutes, it might have been a little bit more.  After 15 minutes I flipped them.  Then added the parmesean cheese to the top.  One of the cakes was pretty crumbly, the other three had pretty good consistency.  I then cooked them until the cheese was melted and they were starting to get brown.  It was about 15 extra minutes, probably a bit longer. 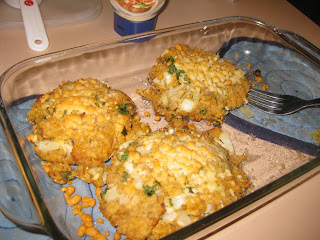 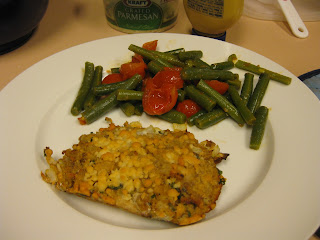 As a bonus here is Sprinks review of the Salmon:
7yu6ZAOUJ! crfdx1
Posted by The Elephant at 9:32 PM No comments:

Since my Key Lime Pie worked out pretty well, I figured that I would attempt another dessert.  After countless hours of research I settled on Baklava.  This link is the recipe that I used, and it is shown below.

I made a few changes based on the recommendations of other users.  The first change was to the nut mixture.  In addition to the cinnamon I also added 1/4 cup of sugar to the nuts and tossed it.  I am not sure that this needed it, but since I was using all walnuts, I thought the sugar might be good.
The second change was in the sauce.  I made 1.5 times the sauce that they called for.  This meant 1.5 cups water, 1.5 cups sugar, 1.5 teaspoons vanilla, and 3/4 cup honey.  I increased the honey to 1 cup in addition to that.
The last change I made was that I cooked it at 325 degrees instead of 350.

One of the recommendations was to make the sauce and then cool it.  This sounded good to me, so I started there.  The sauce was pretty easy to make.  Once that was done, I set it aside to cool.
Then I began chopping up the nuts.  I don't own a chopper, so that took quite a while, but the end result of the nuts tossed with cinnamon and sugar. 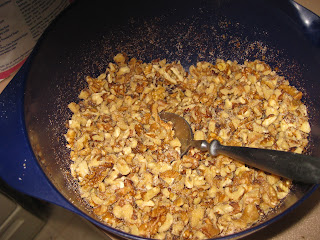 I then began with the phyllo dough.  I let the dough thaw a little bit before using.  The recipe called for the dough to be cut in two.  Instead of doing that, I followed one of the recommendation and simply folded it over.  Here  is the dough laid out: 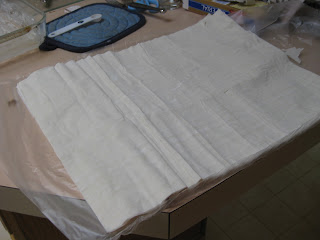 And here is the first layer of the Baklava.  I laid 4 sheets folded over.  After each fold I buttered the top layer lightly.  I melted the butter and then used a brush to apply the butter.  You have to be very gentle to not rip the dough. 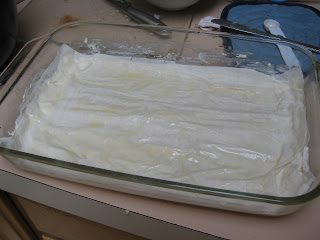 After the first layer I applied the nuts.  The recipe called for 2 tablespoons of the mixture, but that was not nearly enough, so I just filled the layer with nuts. 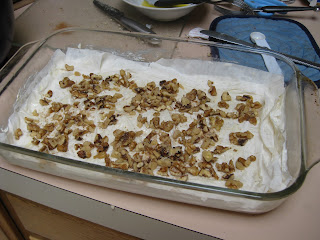 Then I continued layering.  After a layer of nuts it was one folded layer of dough, then butter, then nuts, then repeat.  The top layer was 3 sheets.

Finally, I cut the Baklava into squares and put it into the oven. 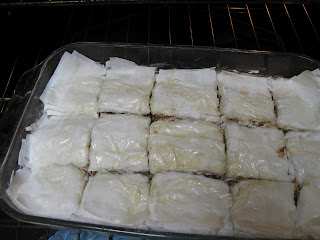 After the dessert was in the oven, Sprinkles decided to check out the dishes.  This was not nearly as exciting as dishes that involve meat.  So she soon left. 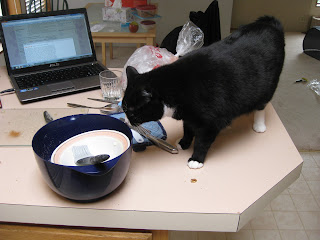 I checked the Baklava after 45 minutes and it was pretty close to done.  I let it go for a few extra minutes, then pulled it out. 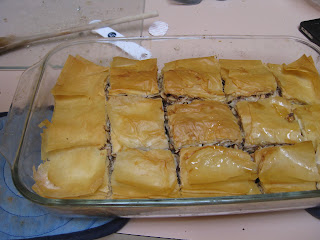 I then slowly spooned the honey sauce over the Baklava.  It doesn't really look that different, but the picture below has the sauce spooned over it. 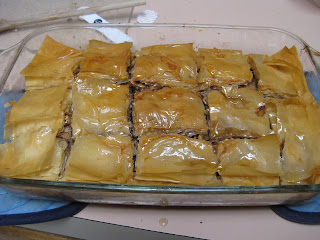 Here is a picture of one of the pieces.  I thought that this turned out really well.  The bottom layer was soaked in honey and delicious.  I'm not very good at describing food, but this was well worth the effort and I highly recommend it. 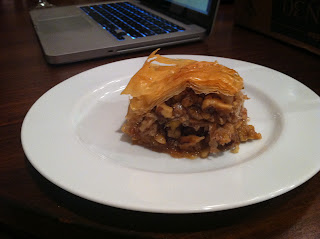 So one of the recipes that I have been thinking about making for a long time is Chicken Cordon Bleu, I just was never confident enough about my ability to pull it off.  Especially since Cordon Bleu is always associated with those fancy looking cooking schools that are always advertising on TV.

Anyway, I finally felt like I could attempt it, though I wasn't sure exactly how good it would be.  Here is the recipe that I used: Link

So the recipe didn't really say how thin to pound the chicken.  One of the comments recommended pounding it until it was about 1/2 inch.  So I tried doing that, I think I got fairly close.  Basicially this is just to reduce cooking time.


The first change that I made was instead of coating the chicken with flour I used bread crumbs.  After I had put the ham and swiss in the chicken and folded it over I brushed an egg over the chicken, then I coated it with bread crumbs.  Since the recipe called for flour mixed with paprika, I added the same amount to the bread crumbs.  I think that I should of added a little bit more, but it turned out fine.


The next change, was after browning the chicken in the skillet, I then cooked it in the oven for 20 minutes at 350 degrees.  A lot of people recommended that as a better way to finish cooking it.

This meant that the sauce was also slightly different.  After putting the chicken in the oven I mixed the wine, bouillon, corn starch and heavy cream in a bowl and simmered it for about 10 minutes.

The first step of course was to have the chicken inspected.  Sprinkles made sure that it was not spoiled.  I had to stop her before she actually ate it, but other than that she did a great job. 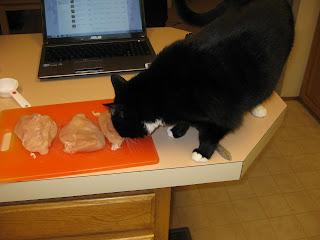 I pounded the chicken and then began the process if filling it with the ham and swiss.  One of the thing that the recommendations added to to wrap the cheese in the ham.  This keeps it from melting out. 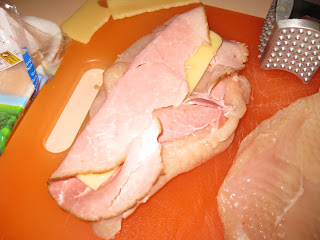 I then folded them up and secured them with toothpicks.  One user recommended using string, which might actually be much easier, it was kind of annoying trying to get the toothpicks out after they had been cooked. 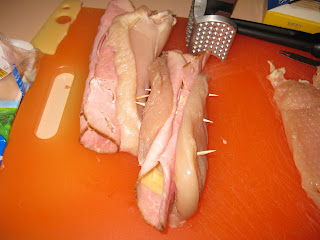 Then I coated them with bread crumbs and put them in the skillet. I cooked them a little longer thaen the recipe called for.  Here they are right before I put them in the oven. 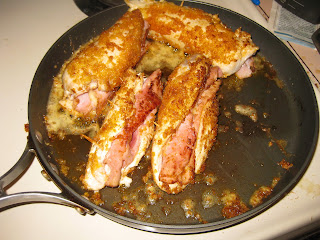 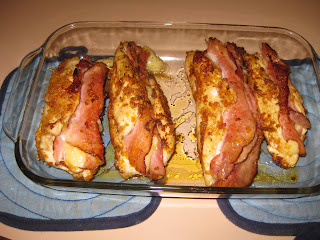 And finally, here are two picture of them cut up.  One without the sauce and one with the sauce. 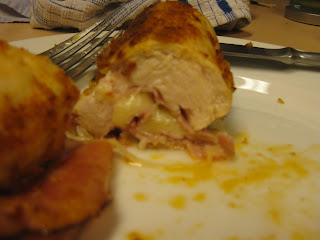 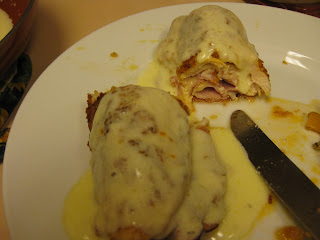 Anyway, the recipe ended up turning out very well, and really wasn't that hard.
Posted by The Elephant at 2:33 PM No comments: