So this year it was time for my mom's side of the family to have a reunion.  This year the reunion was held at South Padre Island, which is basically at the very bottom of Texas, so normally very far away for me.  But since I am in Texas for the summer it wasn't much of a trip....

I met my parents at the Austin airport and we took a quick flight to Harlington, TX, which is the closest airport to the island.  From there it was a quick 1 hour shuttle ride to our house.  But the shuttle looked awesome!  And it saved us a 6 hour drive from Austin, so that was very nice. 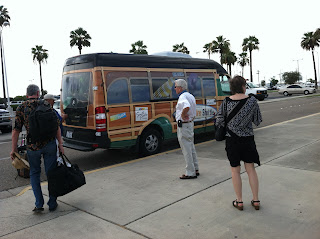 After we got dropped off I said hi to my Aunt Margo and her family and then sprinted to the back porch for the amazing view of the bay.  We were on the bay side of the island, which faced the mainland, and also didn't have a beach.  But the porch was pretty nice. I quickly put on my trunks and dove in.  It was... very warm and nice.  The bottom, which I could touch was a bit gunky, but that wasn't that bad.  The ladder was also a little dangerous as it had a lot of barnacles on it that very sharp and was easy to get cut on. 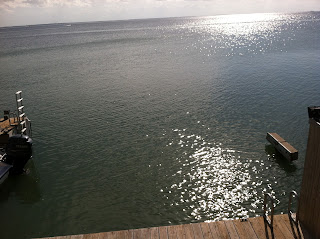 After I got done swimming, Kyle decided that he wanted to fish, which I thought wasn't going to work that well, but surprisingly..... he caught something immediately!  It was some kind of bottom feeder... here is a not so great picture of it. 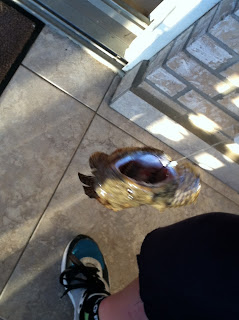 Here is a great picture of the sun starting to go down, with Margo and her kids, Kyle and Claire.  Kyle was still fishing. 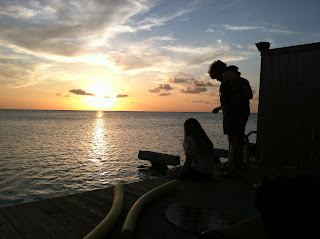 And he managed to catch another fish! 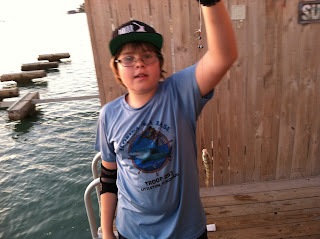 By that time the rest of the family had arrived.  Derrick, seeing Kyle's easy success, wanted to try fishing.  Here he is with Kyle and Claire, with an actual fishing pole. 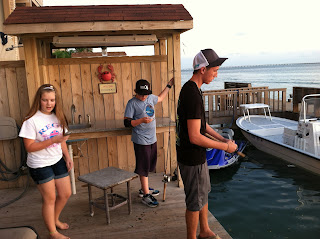 Here is a closeup of Kyle's second fish, which he was trying to use as bait to catch a bigger fish.  It was taking way to long though, so I made him throw the fish back in the water so that it could maybe live. 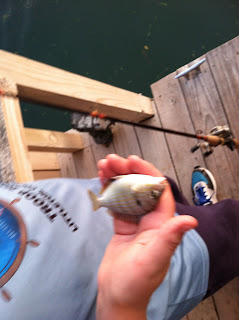 After everyone arrived, I helped my parents make dinner.  I didn't do a whole lot of work, I just cut some veggies and then hung out with my cousins.

Here is Riley with an after dinner ice cream treat. 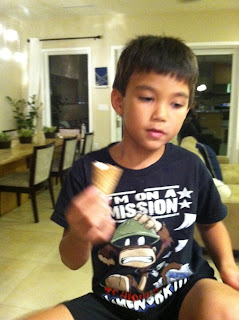 After all the parents had gone to bed, the kids stayed up and talked and did stuff.

Kyle decided that he wanted to get a tan from the lights above the pool table. 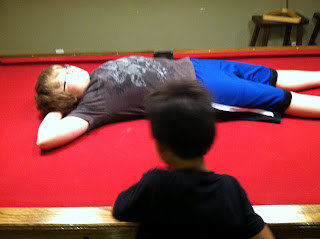 The girl cousins decided to take my phone and make a.... very nice picture. 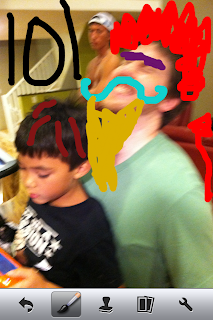 Then they braided Claire's hair.

This is Haley, Marissa, and Claire. 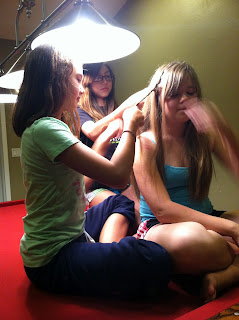 I guess that we might have been a bit loud, one of my Aunts came up and informed us that we needed to be quieter and we were keeping everyone up.  So we went to bed.  I think putting all the kids on the top floor might have been a slight miscalculation.

I got to share a bed with Derrick and Riley, which was interesting, since Riley seems to like taking up most of the bed.  So I got a small sliver of the bed.  But it was still a good first day and it was great to see all of my family again.  I don't get to see the Cleveland side very much.
Posted by The Elephant at 6:29 PM 2 comments: