So after dabbling in fancy dishes with Salmon and Quinoa, I decided to once again go back the the old staple chicken.  I think that this is just about my last chicken dish that I made.... which seems unlikely given that I have made a lot.  I never knew there were so many ways to make chicken, before I attempted this new recipe every week thing.  In general, having a new way to make chicken was kind of a life saver since it was always easy and I could usually whip through it on days when I didn't want to attempt something massive.

For this dish I found something that sounded kind of exotic, but it also had really good reviews, so I figured I would try it.  Here is a picture of the final result.  The recipe doesn't call for it, but I served it on top of a bed of white rice since many reviewers recommended that.  I almost think that the tomato sauce mixed with the rice was my favorite part of this dish. 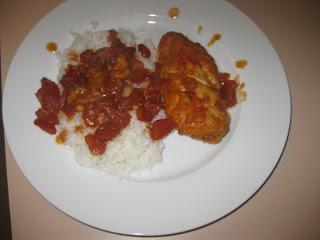 And here is the recipe that I used: (Link)

I made a few minor changes to this.  The first was just in how much I made, I only made four breasts.  The second is how I applied the flour mixture.  Sometime during this year I found that the best way to apply a flour or any coating to meat, especially to chicken, is to mix everything together in a ziploc bag and then drop the breast in and move it around inside the bag.  This is terrific and really easy. (Note: It feels odd to actually have a cooking tip to give out, even if it might be well known)

The final change was that I cooked up some white rice to serve with this.  I thought the rice complimented this dish really well and I would definitely recommend making it if you make this recipe.

So after coating the chicken in flour, I started to cook them in the skillet.  Since it is going to cook more with the sauce you don't want to cook them all the way through, simply brown it on all sides. 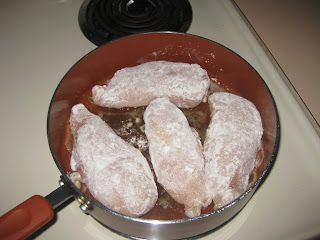 This was hard for me to accept, but I figured the recipe knew best.  Here is the chicken after finishing on the skillet. 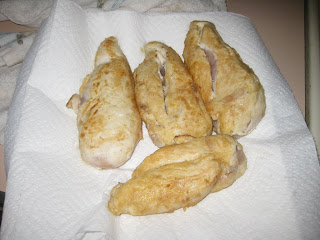 I next started the sauce, shown below. 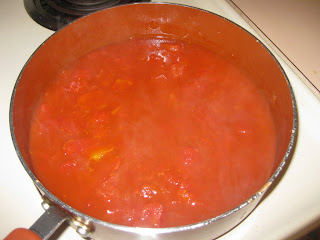 Once it was ready I added the chicken to the mixture. 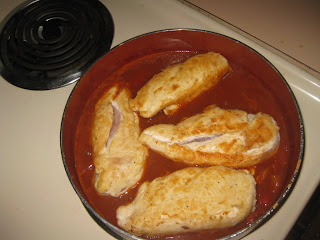 I let it simmer and then moved on to the rice.  Sprinkles observed me from her perch at the top of the cabinets. 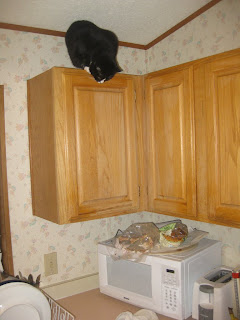 Soon the dish was ready, and the final result is below.

I really liked this dish.  It was pretty simple, but also very good.  The sauce on the rice was terrific and the chicken was good too.

Since I know what comes next, I will preview the future.  Things are about to get slightly higher scale.  Up to this point I had mostly been making things from allrecipes.com, which was good because for the most part the recipes are straightforward and easy enough for me to make.  But starting with the next recipe, I got the majority of my recipes from finecooking.com, which is sort of a step up from me.  It will be interesting to see how I fare...
Posted by The Elephant at 10:51 PM No comments:

So, I am way behind in writing these blogs, I don't remember exactly when I made this, though my camera says I took these pictures on October 29th.  So I guess that is when.  I made these recipes together and this marked the start of a lot of quinoa dishes.  Quinoa is really healthy and I have enjoyed a lot of these dishes.

One reason I am combing these two recipes is because I made them together, but also because I need to just get through my massive backlog (around 20 recipes).  Normally, it would be nice to split these up and highlight each one in its own post.

Here is the final result of these two recipes: 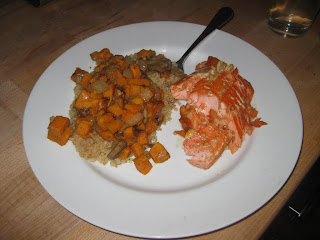 Here is the recipe for the Maple Salmon that I used(Link):

I think that the only change that I made was to used 2 pounds of salmon and double the size of the glaze.

Here is the recipe for the Quinoa and Sweet Potatoes that I used(Link):

I made a few changes to this recipe.  The first was the size, I used 1 cup of quinoa and 2 cups of veggie broth to cook it in.  I have found that cooking the qunioa in broth make it a lot better, than just cooking it in water.

The second change was that I used 2 sweet potatoes and increased the size of the onion I used to medium.  Finally, I added a little bit of cinnamon and also increased how much cayenne that I added.

I started by allowing Sprinkles to investigate the salmon, she seemed to enjoy it, at least through the bag. 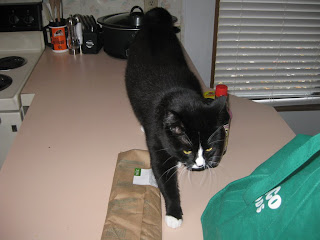 So then I prepared the glaze and mixed it up. 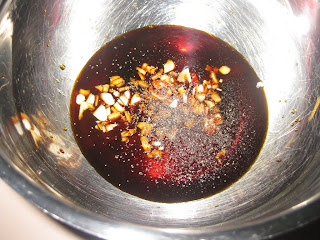 I then brushed the glaze onto the salmon and wrapped it in aluminum foil. 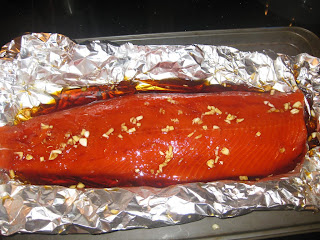 I then prepared the veggies for the quinoa.  I peeled and chopped up the sweet potatoes. 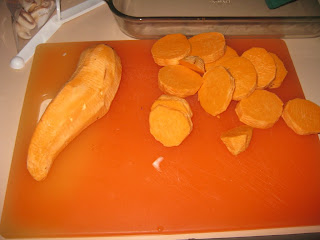 I then chopped and diced the onions.  These were among the strongest that I have encountered.  In fact they even made Sprinkles cry.  I am not sure that this picture shows it, but trust me, she is tearing up. 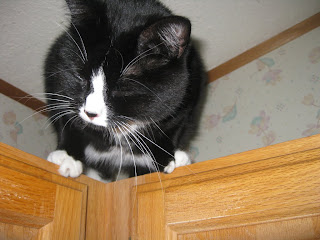 I then put the salmon in the oven, and started making the quinoa and veggies.  Here you can see the quinoa toasting and the onions starting. 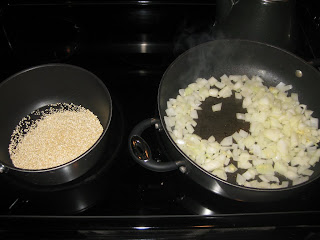 After a few minutes I added the broth to the quinoa  and added the rest of the veggies to the onions and cooked them. 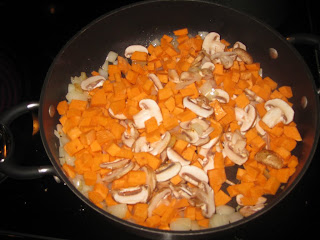 Soon the salmon was done and removed from the oven. I tested it by using a fork to flake it.  I think that I ended up cooking it slightly longer than the recipe called for. 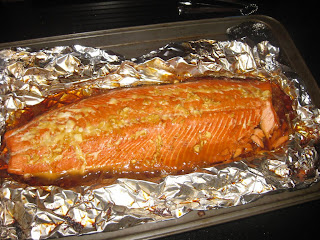