Well it has been forever since I last updated this blog and lots and lots has happened.  But I am going to start with the oldest noteworthy thing and slowly get caught back up.... maybe by the end of the year I will actually be all caught up.

So during the first week of August we were able to get a half day off on a Friday and we headed to Hamilton Pool.  Normally, the pool is very busy as only a certain amount of cars can get in at a time.  We figured that going on a Friday afternoon would limit that and make it more likely that we would get in.  And that was the case!  We got in very easily and parked and headed down to the pool.  One thing of note... I didn't drive!!!

It was about a half mile walk down a hill, so we set out. 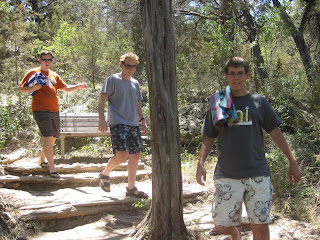 We got to the pool and it was not very full... or at least it didn't seem that full.  The only sad thing was that there was no waterfall.  Normally a waterfall would be streaming down from the rock shelf. 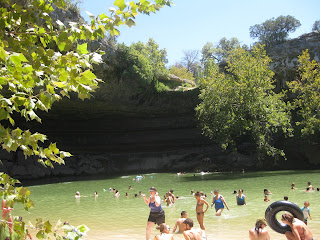 We got in the water and it felt really great.  The Texas heat made it so that the water was just really refreshing.  We swam around and swam under the "waterfall", which was more of a drip coming down from the shelf.  Afterwards I walked around the pool and snapped some pictures while the other guys kept swimming. 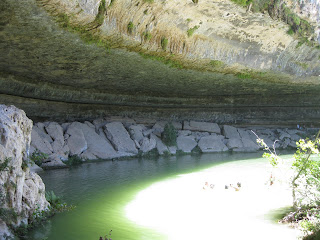 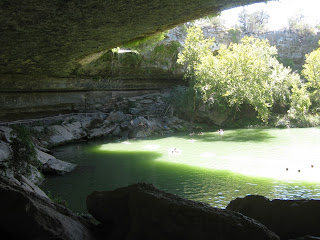 In the picture below you can almost see the waterfall... which is the drip that is coming down in basically the middle of the screen.... it was really small, and I think that the pool would have been much more impressive with the full waterfall, but it was still a pretty amazing pool. 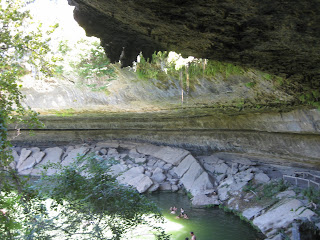 I really wanted to walk to the river which was .6 miles away.  It took awhile, but I finally convinced the guys to come along.  Jacob was really skeptical... but since everyone else was going he begrudgingly came along. I made the mistake of not changing my shoes and so I ended up walking in my flip flops... which was not all that great of an idea... but I made it.... so that was good, just with some slightly dusty feet.

On the way we saw some awesome local wildlife!  Well.. we say some vultures.  I didn't see any dead animals... but it was pretty hot so they may have been following us expecting that we would fall over. 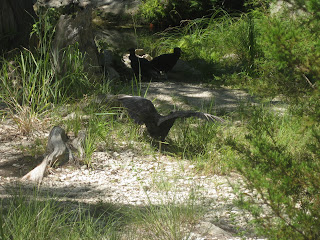 We eventually made it to the river, which was totally deserted and also totally warm! The water had to have been at least like.... 80 degrees or so.  Or at least 78.  It was also really low as the drought had clearly had an effect on the water levels. 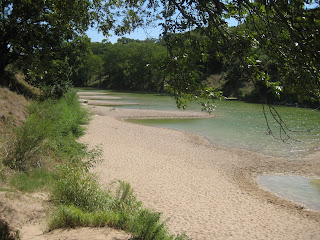 Jacob was clearly happy that we came all this way for a low, hot river. 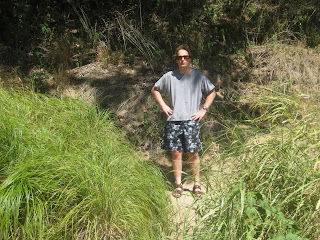 I really liked the river, it was secluded and actually had some really nice scenery.  According to Todd the area was actually used in the movie "Predators", which is pretty cool, and I could definitely see why as it was kind of an exotic type place. 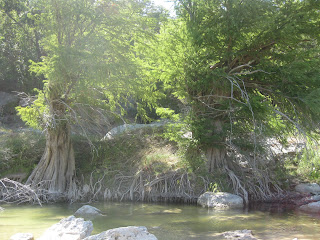 We managed to find the only shady area and parked there for awhile and enjoyed the area and the water... well I did anyway. 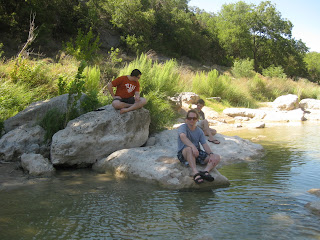 Jacob particularly enjoyed the view from his rock down the river and so he borrowed my camera and took a ton of pictures.  The one below is the artsiest of the bunch.  Mainly since it is Sepia toned... 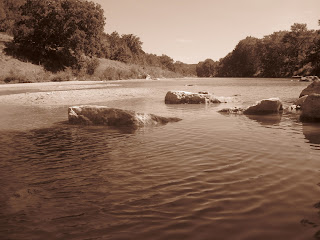 Off in the distance we saw some creatures rumbling down the hill.  They were really far away, but I decided that I wanted to figure out what they were.  So I headed off down the river..... it ended up being a lot farther than I thought it would be, thought that might have been because of the heat.

I eventually made it to the area ad found out that... it was a herd of goats!!! I am assuming that they were wild goats? But I am not sure... it just seemed really weird for a herd of goats to be roaming around the wilderness.

Anyway, I tried to sneak closer, but the sentry goat noticed me and then they all tore off away from me and back up the hill and away from the river. 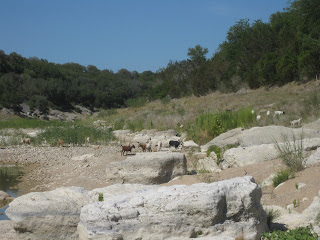 Finally, we headed back to the pool and dove in for a few minutes to cool off from our walk back.  We didn't have long since the pool closed at 5:30.  We swam around for a little bit and then headed back up the trail.

Posted by The Elephant at 10:43 PM No comments: