We take a break from the back log for a new recipe.  I have been thinking about making this for a long time and it actualy turned out really well.  I probably would have waited to post this, but I got a request to write it as soon as possible.

So I made a pot pie before and it turned out really well, so well in fact that some friends make the recipe just about every week.  I thought it was really good, but since making that is basically all my meals for a week and I like trying new things, I don't make it very frequently.

Anyway, I searched for a long time to find a crab pot pie recipe that I thought looked good.  I finally settled on this recipe for Charleston Crab Pot Pie.

This was the first recipe that I have made in this span of cooking a new recipe every week that was not from allrecipes.com.  Which felt weird.  I am used to reading the comments to get ideas for changes.  I didn't really have that this time so I had to depend on my own experiences to make any changes.

So first here is a picture of the dish.  This is served hot, so it wasn't really set up.  In general it might have been more like a casserole than a pot pie.  The full recipe is below. 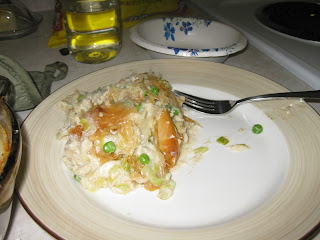 I didn't actually make many changes to this.  I leave the two optional items, (shetty and ground red pepper out), mainly because since I am in Texas I don't really want to stockpile cooking stuff that I already own in Oregon.

The other change is that I added pepper to the crab mixutre.  I probably added about 2 teaspoons.  I also added slightly more cajun seasoning than was called for.

The final change I made is to use a few more sheets of phyllo dough.  I ended up using 4 instead of the two that was called for.

The process for this pot pie is actually a lot simpler.  The real difficultly is determining what kind of crab you want to use.  I debated whether I wanted to buy whole crabs and then shuck them and crack the shells and get all the meat out.  I decided not to do this and instead I just got some prepared crab meat.  I know some people probably would not do this, but I actually though this was a really goo solution and I thought the crab tasted fine.  I do think that fresh crab meat would probably have made the dish even more amazing than it turned out.

The first step was to cut the leeks.  I actually had to look this up since I had never cooked with leeks before.  The key is to cut the roots off at the bottom of the white part and then also cut all of the leafy stuff off. 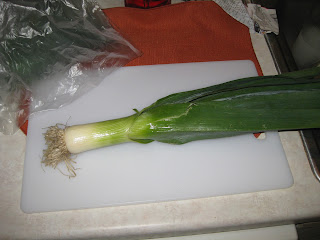 I then cut them up by slicing them lengthwise and then chopping those pieces up. 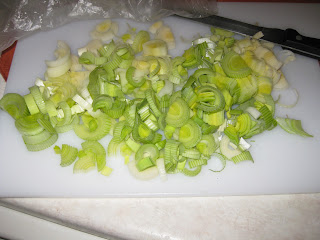 Next I cooked them with some butter, and after a few minutes I added the flour. 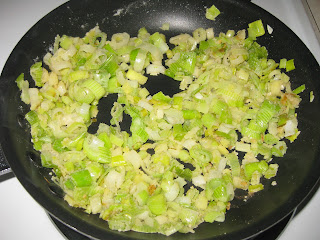 After another minute I added the milk to the leeks and then brought it to a boil. 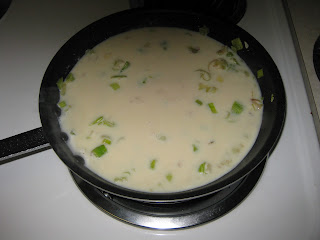 Next I aded the brab meat, which strained the edges of the pan. (side note: boy do I miss nice cooking utensils and pans) 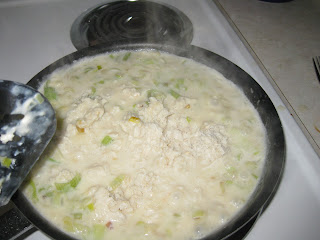 I didn't actually have to add the crab meat to the pan since I wasn't supposed to heat the crab according to te directions, but I wanted the crab to get some heat before I cooked it, so I added the crab and the peas and seasoning to the pan and slowly stirred it all together on the burner.

I then put it all in the only cooking dish that I have here.  I added just a dash more of pepper and cajun seasoning and mixed it together again. 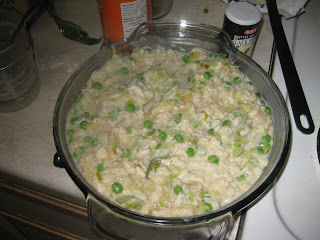 Then it was time to cover it.  The recipe called for one sheet of phyllo, and then to stack another on top, but that didn't seem like enough.  So for the first layer I used two sheets.  I just buttered the top sheet and then folded it.  I was unclear what crosswise meant, but it means not lengthwise... if that makes sense?  I put those two sheets on top of the crab mixture and then tucked in the edges. 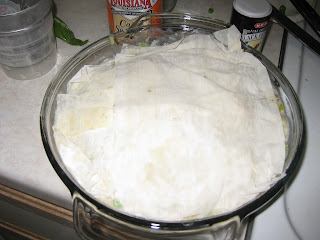 I added another two sheets and then added the remainder of the butter dijon mix. 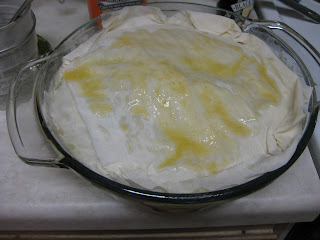 I ended up cooking the dish for about 27 minutes.  It looked pretty much done at 25, but I wanted to make sure.  This is what it looked like just out of the oven. 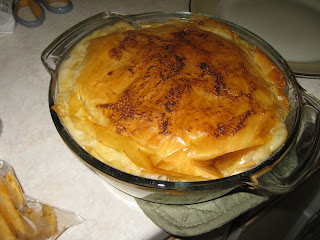 Here is a side view. 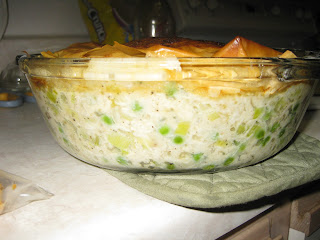 And here is one serving.  I actually really really liked this dish.  I wasn't sure what to expect, but it was great.  I am not sure it is totally a pot pie, since it doesn't have real pie crust, but the phyllo dough totally complements the crab mixture.  It is light and flakely and a bit buttery and just went really well with it.  I actually thought that there was not enough of the crust, so it might be better to add a few more sheets to the top.

Unfortunately since I am in Texas, Sprinkles can't be a part of the recipes.  One of my roommates loves Sprinkles, despite never seeing her, and suggested that I use pictures of one of my other roommates.

Instead I took a picture of him.  He enjoyed it about as much as Sprinkles does. 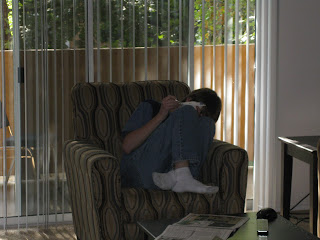 During the process, my other roommate feel asleep, so he also gets to be featured. 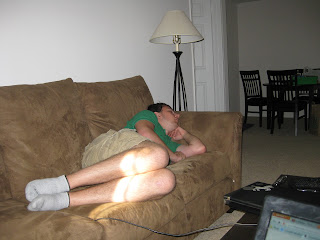