One of my most succesful recipes was the Chicken Pot Pie, or at least I like to think that it was successful since it managed to make one of my friends actually like Pot Pie, for the first time ever.

So I decided to experiment I had already made the crab pot pie earlier in the summer, so I decided to try a ground beef version, which is shown below: 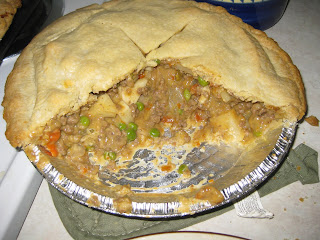 I made this a while ago, but I don't actually remember any changes that I made.  I do think that it is important to point out that this makes 2 pies.  Which is a lot of food.  It made me for over a week.... and by the end I was... kind of tired of meat pie.  So just be fore warned, either cut this recipe in half or expect to be eating a lot of meat pie!

The process of making this was actually really simple.  I just mixed everything together in a huge pot.  First I put in the meat and onions: 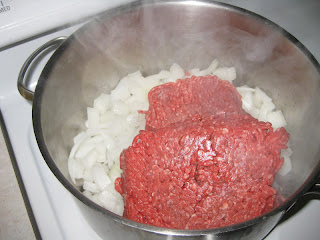 My roommate was also cooking at the time.  He was making frozen hamburger patios.  I can't say that I was particularly jealous. 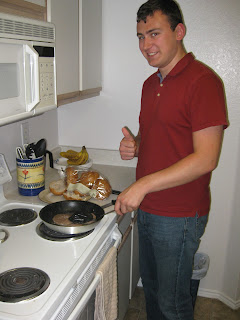 After the hamburger was browned I added the soups, carrots and potatoes. 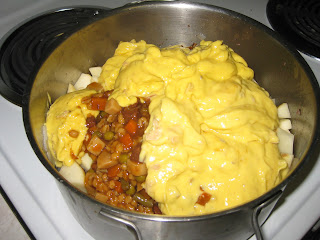 Then I mixed everything together really well to finish the filling. 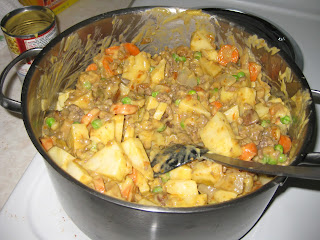 I just premade pie crusts.  Normally I would use the kind that you roll out into the pie plate, but since I had no pie plate I didn't really have a choice.  I took one crust and put it on top the pie crust with the filling.  The picture below shows one completed and another without the top.  I then cut slits and baked them. 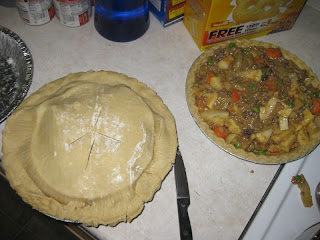 And here is the end result.  The only thing that I would change is to cook it for a little longer.  I was playing volleyball and so when the timer went off I just ran in and took them out of the oven then went back and played again.  Had I looked closer I think it could have used a few more minutes.  But I still really enjoyed it.  I don't think it was as good as the chicken pot pie, but still really good.

Posted by The Elephant at 9:53 PM No comments: