This isn't actually the first dessert that I have made in this whole cooking thing that I've been doing.... but I feel like writing about this one first... so it is number one. This past Wednesday was Pie day, and while I was too busy that night to actually make pie, I still wanted to do it sometime. So Thursday I decided that I would make some pie and key lime pie just sounded really good. So I investigated and discovered that if I wanted to make actual key lime pie it would take the juice of 20 key limes!!! This seemed a little bit ridiculous to me, so I searched a bit more and found a replacement recipe that used nomals limes.

I found the recipe in.... yahoo answers, which isn't always the best source of information, but the poster claimed to be a chef and the recipe sounded pretty good to me. So I went with that. Here is the recipe.

Whisk zest and yolks in medium bowl until tinted light green, about 2 minutes. Beat in condensed milk, then juice; set aside at room temperature to thicken.

Adjust oven rack to center position and heat oven to 325 degrees. Mix crumbs and sugar in medium bowl. Add butter; stir with fork until well blended. Pour mixture into 9-inch pie pan; press crumbs over bottom and up sides of pan to form even crust. Bake until lightly browned and fragrant, about 15 minutes. Transfer pan to wire rack; cool to room temperature, about 20 minutes.

After crust is cooled, pour lime filling into crust; bake until center is set, yet wiggly when jiggled, 15 to 17 minutes. Return pie to wire rack; cool to room temperature. Refrigerate until well chilled, at least 3 hours. (Can be covered with lightly oiled or oil-sprayed plastic wrap laid directly on filling and refrigerated up to 1 day.)

I firstput the grahm crackers in a bowl and crunched them up using a potato masher. It took a little while, but eventually I got it to mostly crumbs. 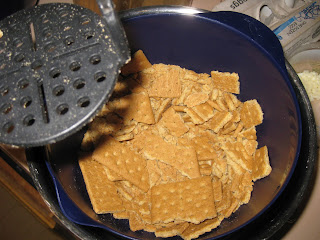 Then I added the butter and sugar and mixed it all together all laid it out in the pie plate. I only had a 9.5 inch pie plate, which was a little bigger than it called for, but I figured it was ok. 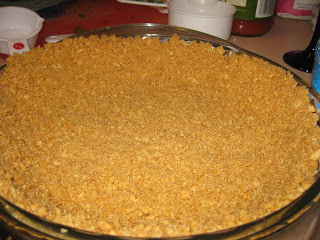 I put that in the oven and then I made the filling. The first part was to get the juice of the limes and the zest. To get the juice I got to use my lemon squeezer for the first time. I had to use about 4 limes to get enough juice. It was a lot of squeezing, but eventually I got enough. 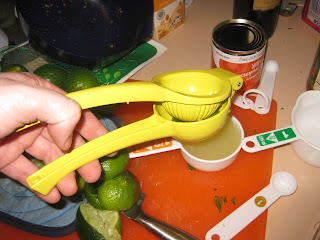 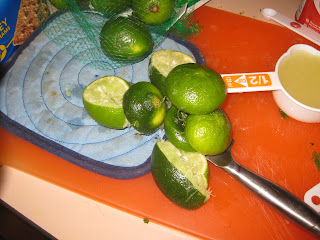 I also had to get zest off the limes, which was a lot of work. 4 teaspoons doesn't sound like a lot.... but when you are talking about zest it most definitely is. Anyway, I added the egg yolks and the zest and mixed them up. Then the condensed milk and finally the juice and whisked it until it was all blended together. I set that aside and waited for the crust to complete.

NOTE: I didn't actually start cooking the crust until after, so it might make a lot more sense to do the filling first and then let it sit while you 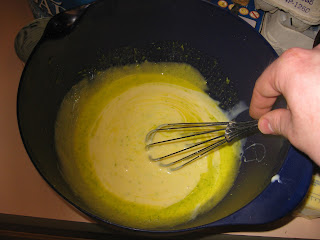 Once the crust was done I let it cool and then I added the filling and let it cook. I let it cook for 15 minutes and tested it. It was jiggly and seemed solid so I ended it then. 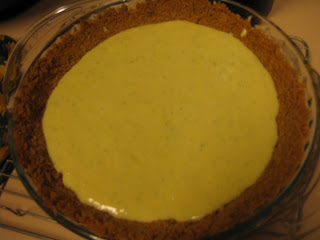 I didnt make the whipped cream that night, but I did taste the pie. It was really really good! It was a little bit shallow, I think partially because the pie plate was a little bit bigger than was recommended, but that didn't matter, it was still great. 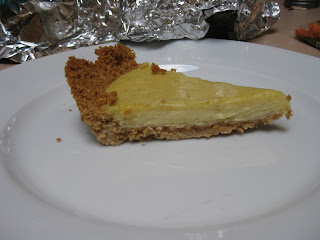 The next day I made the whipped cream, I think that it actually improved the pie, it just balanced out the limeness of the pie and made it just slightly better. 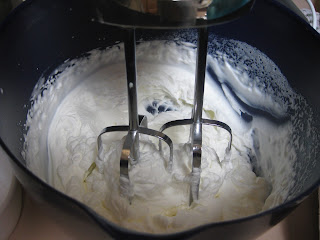 Posted by The Elephant at 10:22 PM No comments: