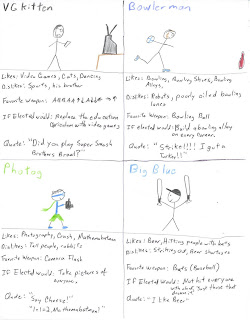 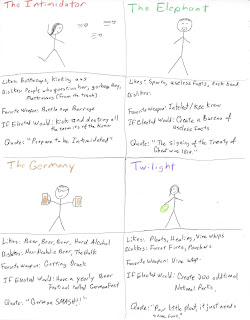 Posted by The Elephant at 5:50 PM No comments:

The League of Evil Primary is over and we have a surprise winner.

After trailing for nearly the entire voting session The Weasel has claimed a 17-15 victory over Lord Cyclone.  As late as 11:30 PM is appeared that Lord Cyclone would pull out a victory, but The Weasel pulled into a 15-15 tie shortly after this point.

Two late votes pulled The Weasel into first and the victory.  Both sides have accused the other of cheating and it has yet to be seen how this may affect the rest of the race.  The League of Evil primary rules require the runner up in the primary to fill the Vice Presidential Candidate role.

Voting in the KEC Krew Primary begins later today.
Posted by The Elephant at 10:28 AM 2 comments:

So it took a little bit longer to get this up than I thought it would.... but here are three entries to hopefully make it somewhat better.

Enjoy!
Posted by The Elephant at 10:21 AM No comments: