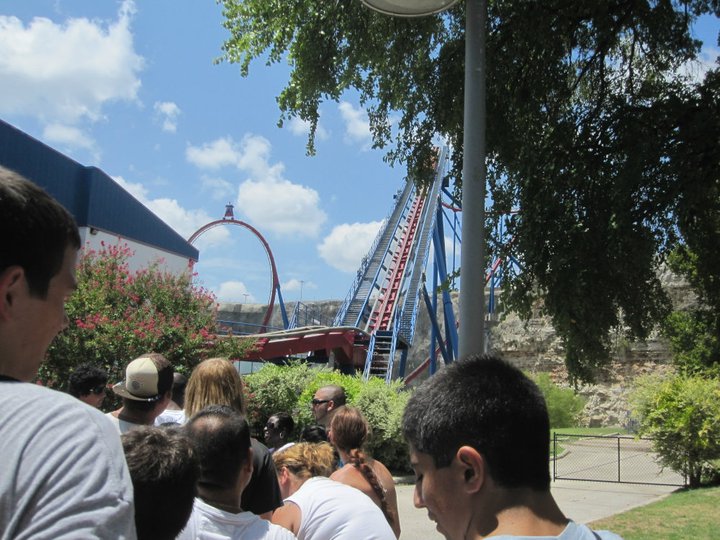 More Backlog! But this one will be shortish... since there is really only so much that one can say about roller coasters.... especially given:

1) I have a limited knowledge of roller coasters and
2) We stood in a lot of lines.....

While roller coasters are exciting... line standing is .... not. So I will skip most of the line standing. Before we left Andy informed us that it was federal law that we could get water for free from the park. This was a very good think to know... especially since it was about 102 degrees outside.

This trip was set up through the Sports Committee, which I am proudly a member of. At times I felt like we were actually the most effective committee. I suppose the T-Shirt Committee did make t-shirts... but we had a lot more events than the social committee, and they were all pretty successful...

Anyway, the trip was set up and we got enough people to get the group rate which was about $25 off the price of a normal ticket, which was really great. I strongly recommend dragging lots of people to 6 flags with you if you want to go :P

We all met at the 6 flags parking lot at around 9 AM so that we could make it to the park kind of early. It was about an hour and 40 minutes drive, so it was a little long. The park opened at 10, I think we got there around 11:30 or 11:40. We were supposed to wait a bit and everyone would show up and we could decide from there what we were going to do. But we waited and... no one showed up.... so after about 20 minutes we decided that we would just head out and do our own thing.

There were 6 of us and we were a pretty good group. One of the most interesting things that we discovered was that Kyle absolutely loves Roller Coasters... he even knows manufacturers based on the type of beams used on rides and had a lot of data that.... while interesting... I had no idea to even think to look it up. So at a few points during the trip we would quiz him about rides and stuff in general. However.... my iPhone did know about some wooden coasters that caught on fire which he was unaware of... so at least I know that he learned something during our quizzing. :) The first ride that we went on was Goliath, which is shown here at night, but I assure you, it looked exactly the same during the day! It was actually a pretty great ride and we zipped through the line, I guess we actually did get there early enough to miss some people. 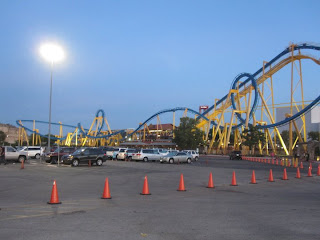 Emboldened by our quick line we went to the next most popular ride, Superman! Below is a picture of it while we stood in line. It is hard to really tell how awesome this ride was from this picture, but the ride sits right next to a cliff so a lot of the time we would zoom super close to the cliff, it added a lot to the ride, and we ended up doing this ride again later in the day (as the last ride).

Kyle describes it thusly: (all of Kyles quotes blatently stolen from facebook)

This was definitely one of my favorite coasters i've been on. It really used that cliff to its advantage. 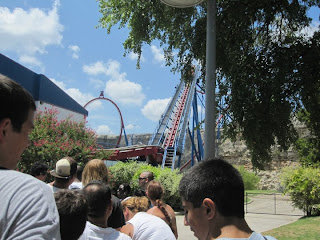 After this ride is was getting quite hot, and so we decided that we should try out a water ride, so we headed to the tube ride. When we got to the line, there were lots of people actually leaving the line... which we thought was really weird. But we soon discovered why... the line was super super slow.... this was easily the longest line that we waited in and it didn't seem worth it. By the time we got to the front we were all hot and ready to get soaked... sadly... it was not really all that turbulent of a ride... but Greg did get really really soaked... he also had the bag with all of our phones... :P luckily, they did not get wet. Below is a picture of some random people tubing.... 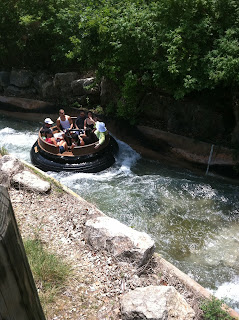 After the tube ride we headed to the Rattler, which we had watched while standing in line for the tube ride. The Rattler was a wooden coaster and ... it rattles a lot while you ride it. According to Kyle this is the triple helix of the ride... I am not sure exactly what that means... but I enjoyed this ride quite a bit. Here is Kyle's description of the ride:

I think a lot of other people didn't really as it was too rattly for some and ... I dunno... I can't remember it was too long ago. :P 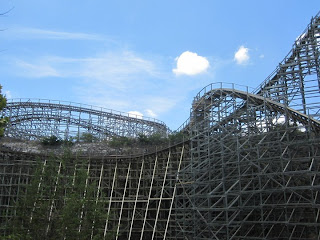 We got in line for the Rattler at like...1 something maybe? And we thought we would be donefairly quickly... but the line took much longer than expected... this led to a rather grumpy and hungry group while standing in line.... we vowed that we would get lunch afterwards, and that is exactly what we did! $12 burgers and fries for the win!!! They weren't really good.... but I was starving so they tasted great.

After lunch, we headed to the Roadrunner Express, because it was close and we figured we probably wouldn't be back in this area again. The line for this was actually super short and the ride was pretty fun (I think that the short line helped my opinion). As you can see from the picture below... the riders are totally hyped!.... or not. 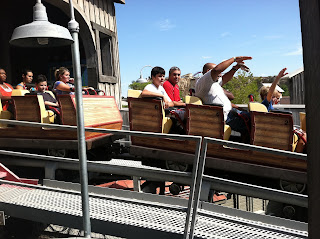 After this ride we ran into some of our fellow interns and talked about our day... they had done most of the rides they wanted to already, mainly by skipping the tube ride. We still had a couple left so we headed away and across the park to Poltergeist, which was... a crazy ride. We started by being launched off the pad at about... I dunno... lets say... 80 MPH! (it was fast....) Then we zoomed through all these twists are turns, still going super fast. Before you could think.. the ride was over... It was kind of amazing. This was unfortunately, the one ride with very little shade in the line, so should you ever go to the 6 flags near San Antonio... do this ride earlier in the day :P. 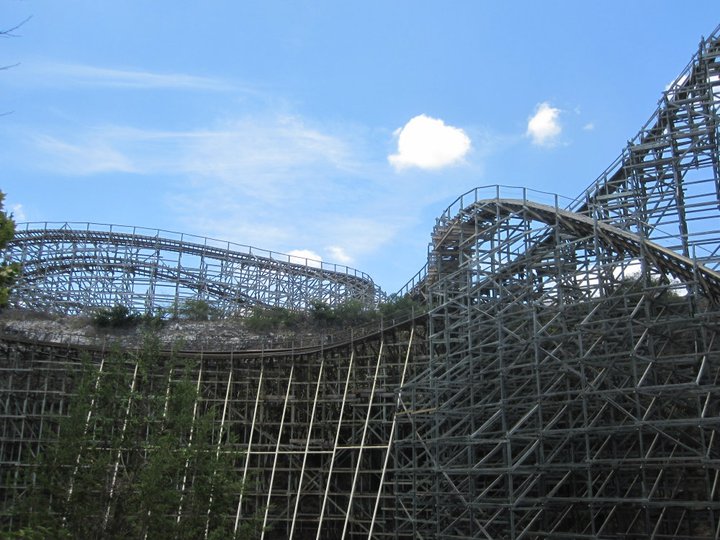 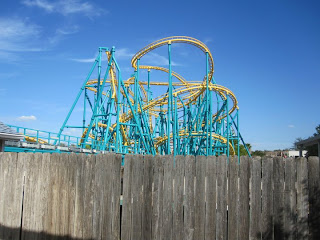 We were contemplating doing the tower drop, but we walked by and the line was super long. Miriah also didn't want to do this, which only meant that everyone tried talking her into it... this didn't really work, but she did agree to go on it.

Since the tower was packed, we went to .... the spinning top ride... or something similar. This was a super short ride and we just were spun around and in a pendulum... it was very disorienting, but pretty fun... I definitely was a little queasy for a while after we finished. 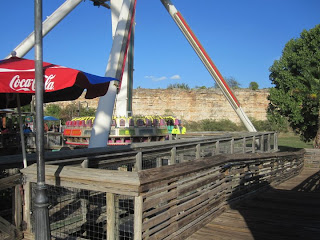 After this ride we went to the spinning coaster, where the cars actually spun as you sat in them. This was kind of a crazy ride and the wait was much longer than expected, but it was AC which was very nice.

We hit the superman ride again, and because Nico asked, the whirrly gig (spinning chairs) I was easily the oldest person on the ride who didn't have a kid... so.... that might have looked a little awkward :p.

And then we were done. We headed back after a successful trip to the theme park.

I would rank the rides that we went on:

1) Superman - This ride was great, used the cliff very well, was exciting and fast and teeth rattling and fast and turny... (Can you tell I know lots of roller coaster words?) Awesomeness Rating: 9.5/10 (I have no idea what a 10 would be)

2) Poltergeist - From beginning to end this ride just did not let up, you started super fast getting launched into the ride and barely had time to get oriented to flying around the track before the ride was over. Awesomeness Rating: 9/10

3) Goliath - This may have suffered a bit from being the first ride and thus less in my memory, but I enjoyed this ride a lot, I just liked the other two more :) Awesomeness Rating: 8.8/10

4) Roadrunner Express - This was helped immensely by the super short line. The ride may have not been as cool as the Rattler... but the line was much much better... which made the ride feel better to me. Awesomeness Rating: 7.51/10

5) Rattler - The quintesitional wooden Roller Coaster... you will get rattled.... but it had some really cool parts and dives and worked really well. Awesomeness Rating: 7.5/10

6) Spinning Cart Coaster - This one was short, but the ride itself was pretty fun, and the spinning cart was very interesting.... It lead to some suprises which was fun. Awesomeness Rating: 6/10

7) Spinning Top - The line was super short, which was great, and the ride was fun enough, the queasyness wasn't so great, but still a pretty fun ride. Awesomeness Rating: 4/10