This past weekend was the third annual CGE Brew-off, which is a competition where members of the graduate student unions at Oregon State and the University of Oregon brew their own beers and have a competition to determine which beer is the best.  This is also a fundraiser event for a local food sharing group, so it is all for a good cause!

Last year we entered a generic stout, but due to some bottle issues we ended up having some flat beer and a rather poor performance.  The voting was done by the participants who all walked around and deposited bottle caps of certain colors to determine the best beer, the best name, and the best experimental beer.  Despite our best efforts.... we got second to last.  Had we done a little worse we would have gotten the prize for best beer!  So basically, we did as bad as possible.

Last year, the best name was something that was a play on the word "nut", more evidence that grad students aren't as mature as some people might expected.  So we decided to try and make a beer where we could do something similar.  So after much discussion, we choose to make a Chocolate Hazelnut Porter.

In addition, this year we would have a secret weapon... a keg!  I got a keg and CO2 tank and other attachment stuff the previous Christmas and I finally got around to breaking it out for the event.

It was amazing! So much better than bottles and the beer was not flat and the carbonation was pretty good, which was great.

Here is a picture of the keg and the CO2 tank before the event. 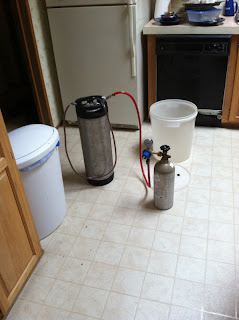 We went to dinner before hand and got to the event about 45 minutes early.  So there was a lot of waiting around.  Luckily, we had some chairs behind out table, so we were able to sit down a little bit.  One thing that I totally forgot to bring was two pitchers to allow us to clean out people's glasses before we gave them beer.  The year before we had been next to the guys who won best beer and they had done this.  It seemed like a great idea and I made a huge mistake not bringing them.

Luckily, Andrew went exploring and found several pitchers in the kitchen at the Odd fellows hall where the event was being held and we were able to set up our little cleaning station behind the table. 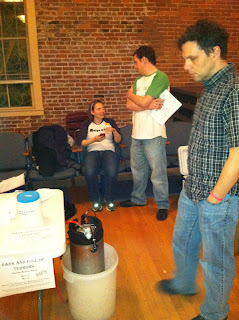 We were placed in the room with the stage meaning that we would have to be giving out beer and talking over loud music.  Last year the bands had been pretty bad and pretty loud. 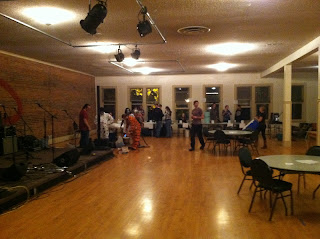 The event started at 7:30 and people began streaming in.  We were very nicely placed to be one of the first places that people saw when they entered, which I think was really good.  Here is a picture of the room with some people taken from behind our table. 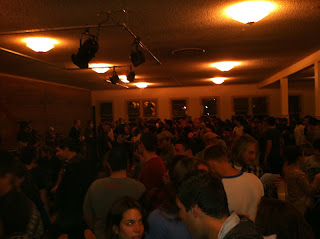 Allison graciously volunteered to be a server and Andrew, Chris, and kind of Eric (kind of because he was more interested in drinking other beer) helped out.  In general Allison and I were always at the table and then one of the other three was there to help clean glasses or dispense the beer.  Here is a staged picture of a dispersal.  You can see the glass cleaning pitcher in Andrew's hand. 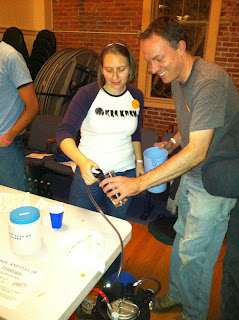 Sometime during the night the Goblin King from Labyrinth stopped by to try our beer! 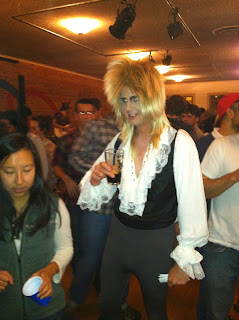 As I mentioned, last year we did not do all that well, but as the night went by, people were saying great things about our beer.  We had several people come up and tell us that several of their friends had told them they had to come try our beer, and we had at least 4 or 5 people who came back not just for seconds but for thirds!  I think there was one who even got a 4th serving!  That was really encouraging, and almost everyone who tried the beer told us that it was really good.

In general, our beer, while a Chocolate Hazelnut Porter, was strong on chocolate and a little bit weak on the hazelnut.  This strong chocolaty taste really stood out though and I think was pretty memorable for a lot of people.

We named our beer "Dark and Full of Terrors", which is a line from Game of Thrones and we got a lot of comments about it and several people say that it was the best named beer there.  We even had one guy come up and tell us that he wished he had seen our name before he voted because he thought our name was the best.  Later in the night he showed up with a best name bottle cap, told me that he had found it on the floor and that now he could vote for us!  He was pretty happy with that fact. Note: He may also have been a little drunk, especially with 30 beers being available.

As the night went out we got a fair number of votes and we seemed to be getting an even spread of some for Best Name, some for Best Experimental, and some for Best Beer.  Here is a picture of the second time they came and tallied our votes so far.  Based on the votes that I was seeing I thought we might have a good shot at best experimental or perhaps best name if there were enough Game of Throne fans. 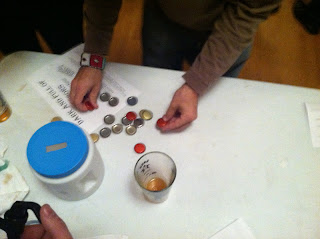 Eric, unburdened by having to serve beer, managed to sample at least 15 beers.  Which is probably about 4 full beers.  He was nice and very buzzed by about 8:45 or 9.  Which may have been the cause for this picture. 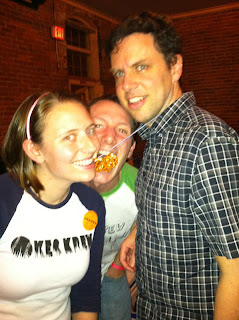 We ran out of beer at 9:10, which was about 20 minutes before voting ended.  We stayed at our post and cheered every time someone came by and voted for us, hopefully encouraging more votes.  There were a lot of people walking through hoping for more beer and several people who just arrived... which was pretty awful timing.

The vote tallying was supposed to take about 45 minutes or so.... it ended up taking more than an hour, which was a little annoying.  We mostly based the time talking, also Eric managed to convince people to try and do Cats Cradle with him.  This took a lot of time, but was pretty entertaining given that most of the parties were a little drunk. 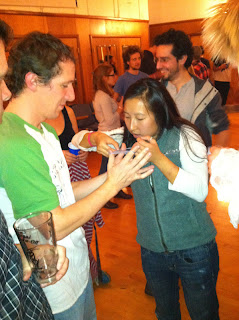 Finally the announcements came.  The announced best experimental and best name and we didn't win which was a little disappointing.  Then they came to best beer.  We got second place!!!  I really didn't  expect that and thought it was far more likely that we would win the name or experimental categories.  But 2nd best beer! That was awesome!  We got a Home brew cleaning kit and a $15 gift certificate to the brewery supply store here in Corvallis. 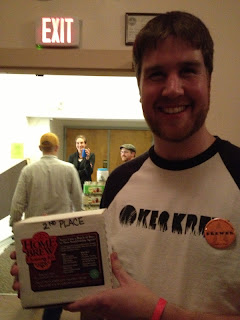 And here is a closer look at the prize. 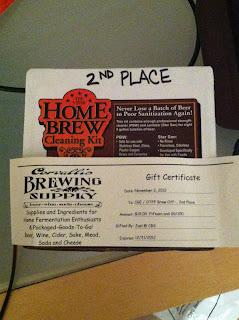 The winner of best beer was the same group from last year, so we got second to some really good brewers, which was great.  Eric, who due to having 15 or more of the beers was kind of an expert, said he thought that our beer was at least in the top three, which was perhaps good confirmation that our beer was pretty good.

All in all it was a great night, helped mightily by the fact that our beer was voted second out of 30 beers!

Posted by The Elephant at 12:59 PM No comments:

When I went to Spain a few years ago one of the most interesting dishes was Paella, which is sort of a giant skillet of rice and meat.  I have always pondered what it would like to cook and if it would be hard or easy.  A lot of the recipes are pretty time consuming, so I decided to try one of the easier variants.  In fact, it was directly called Easy Paella.  So that was a good sign for ease of cooking, perhaps not for taste.

Here is an image of the final result: 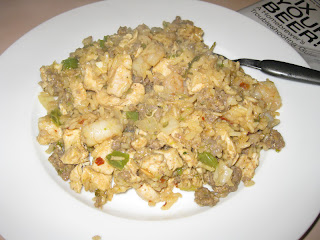 And here is the recipe that I used: (Link)

Saffron is super expensive, so I did not buy it.  I am not sure if that makes this dish super different, but I didn't feel like spending $20 for a few threads of saffron.

I also used hot Italian sausage instead of chorizo.

For most of this recipe Sprinkles sat on top of the cabinets and stared at me while I cooked. 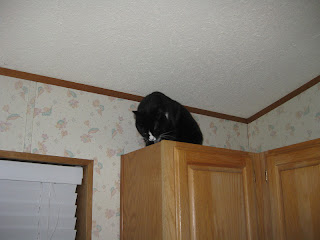 I started by preparing and marinating the chicken. 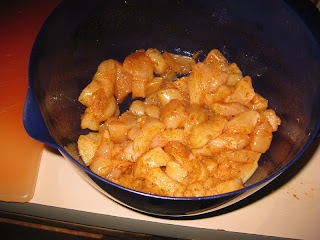 Then I prepared the chicken stock and herbs and started to cook that. 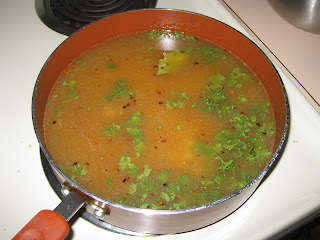 After a little bit I started the chicken and onions in a second skillet. 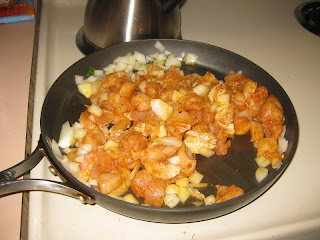 Once the chicken was ready I added the bell pepper and sausage to the mix. 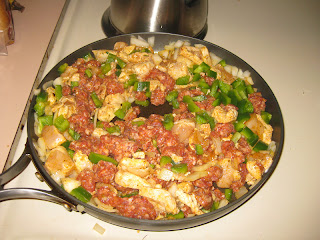 By this time the rice was just about done, and it was looking at least a little bit like Spanish rice, so that was a good sign. 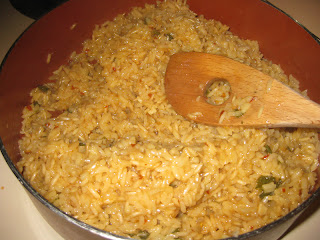 Finally I added the shrimp to the meat mixture... now it was just a huge pile of meat in the skillet. 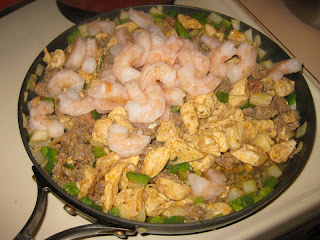 Once all the meat was cooked up I mixed the rice and meat mixture together in a 9x13 dish. 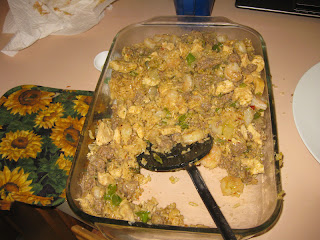 Then I served it up.

I thought that this was a good dish, it was a lot like the spanish rice and sausage dish that I made previous, and there was a lot of meat in this.  But I liked it.  Some people suggested adding another bell pepper and other veggies like peas and that might be a good addition, but this was still a pretty good dish, and I think that being able to use two skillets was good, since otherwise I would certainly have run out of room.
Posted by The Elephant at 4:28 PM 2 comments: