So I have now been in Texas for about 2 weeks and have been doing a little bit of exploring and doing things. Last weekend was mostly recuperation for me as I basically did not have a break for 2 weeks. I had to finish my school stuff and pack and then I drove for 4 days and then I got to work for a week. So pretty much I was very tired. The first day I basically just chilled, and I got an oil change and went grocery shopping. Basically it was really nice to just not do much. I also looked up things to do in Austin. One of the things that was listed was that the Orion Capsule from NASA was visiting and also there was supposed to be a free IMAX showing. But.... we were too late :P lol. But the capsule was still cool. This is supposed to be the replacement for the space shuttle.... of course, it isn't going to be able to be launched until about 2016 or so. I am not sure that I really agree with the policy, but it was cool to see the capsule. 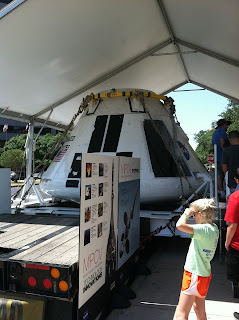 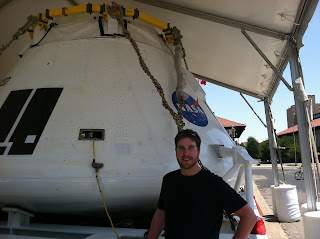 And ... that was pretty much the excitement of my first weekend. It wasn't really a whole lot, but I really needed to rest up. This weekend contained many more activities.

The first activity on Saturday was to go to an Alamo drafthouse and watch Cars 2, which Kyle, one of my roommates was really excited about. It might not have been my first choice, but I enjoyed it a lot more than I thought that I would. It was pretty clever and it was sort of like a Bond movie... only.... well with cars as the main characters. :p 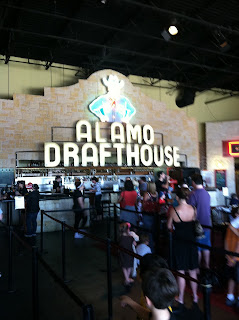 The Alamo Drafthouse is really cool. It is like a normal theater only you can order food and beverages, such as beer and wine while you watch the movie. They also have a very strict policy about Cell Phones and if you are caught using one then they have the right to kick you out of the theater. They also do events like sing alongs or Pancake theater, where comedians do a sort of MST 3K type thing for a really bad movie.

After the movie was over we headed back to the apartment to get our swimming stuff and then we headed down ot Barton Springs Pool, which is an aquifer fed pool that is really close to downtown Austin. The pool was really awesome. I would say that the temperature of the water was probably around 65 degrees, and compared to the 100 degree weather it was kind of shocking to get into. I had to just dive in or else I am not sure that I would have been able to really stay in.

Here is a picture from our spot in the shade. It sort of shows off the pool. 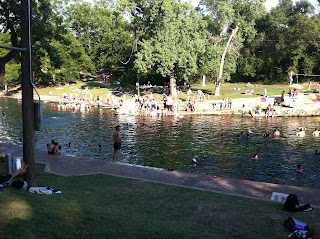 This is a picture from the end of the pool, near the dam that creates it. There were not many people there as it was a bit deeper. In the majority of the pool you could stand up in it, and it was probably about 5 feet in depth on average. 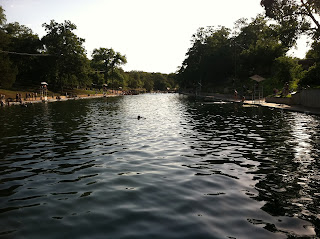 Here is a picture from the other end of the pool where it is much shallower and sort of has a beach if you don't want to use the stairs that they have created on the side of the pool. 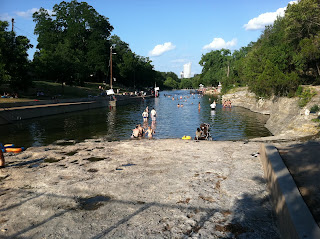 The creek that feeds into the pool was very dried up, so I am not sure if the pool is going to get lower as the summer goes on, but this is a picture of that creek. It doesn't really show off the dryness, but it is! I swear it! 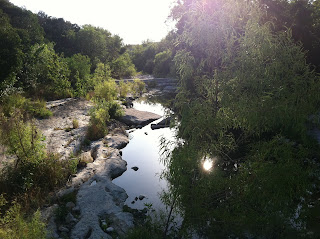 After wards we went to Chuy's which was vaguely famous, since it was the restaurant where Jenna Bush was caught drinking when she was underage. After eating there I can see how she got away with it. One of my roommates, who is 21, ordered a margarita, but they didn't card him. I guess he looks older than 21? lol... not really.

Anyway, I wanted to go to the Bat Bridge to watch the bats fly out at dusk, but we finished dinner slightly too late to be able to see it, but we drove by, so now I know where it is... I guess that helps? We also drove through downtown, and it was really pretty. All of the buildings were lit up and the capital building was in the middle of it. I definitely want to go back and check that out. Then we headed home for the day.

Today Kyle, Jacob, and I went out for a hike. We choose a trail that was very very close. Actually, just at the bottom of the hill near our apartment.... but we drove. :) Which actually turned out to be a very good choice, since walking up our hill after our hike would have been much too difficult.

The trail was called the Bull Creek trail and in a couple of places it crossed the creek, which made it pretty difficult since we had for..... oh wait, no we didn't, we are in a drought! This is the "creek". 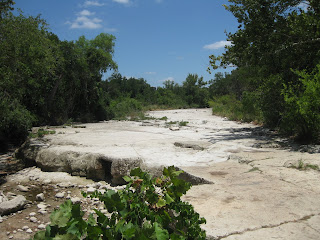 We ended up walking down the dry creek bed for a while, then suddenly.... a fire hydrant! In the middle of the river. I can't figure out exactly what it was for. Considering how dry the river bed was.... I am guessing that it was to fill up the river. Someone should definitely turn it on. 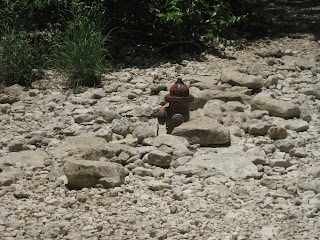 Eventually after walking down the trail a bit more, we come upon some actually water. It was very still and wasn't moving much... but it was water. Jacob was unimpressed. 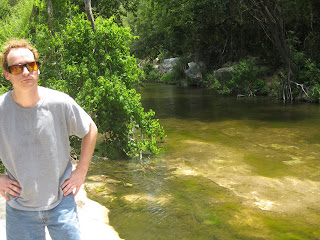 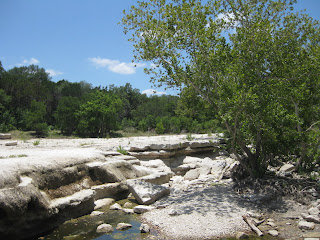 There were a lot of trails that led up the ridge and we scrambled up one, but we quickly got to a point where we could go no further. So we slowly backed ourselves down and kept going down the trail. We ran into a random guy and he tried to tell us there was a trail that led to the top of the ridge and pointed us to a trail.... I stared at it and could easily see that it ended about 7 feet away at a fence, but the dude insisted and when I just stood there, he ran up and showed us how to get around the fence. We decided to not go that way. 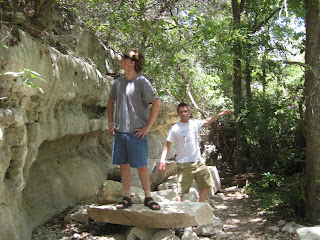 If there wasn't a drought I think that this area would be really amazing, but as it is, the river was dry and it was very hot. So we headed back to the car before we collapsed due to the heat.

For all of the Hike pictures go here.

We then went to the store and got some stuff for a BBQ, and eventually headed down to our

pool. It was packed as there was a party going on, but we were able to squat at a grill and make some burgers, which was a good ending to a busy weekend.
Posted by The Elephant at 2:44 PM No comments: