Eric and I have been talking about brewing beer for a long time and so when I moved into a bigger place that had room for storage we decided that we would finally go for it. On Thursday we started our first batch of beer.
(Note: if we ever come up with a name for our brewery I will probably make a blog specific to that, but for now, it will just be updates on this blog)

So the whole process took quite a while, since we were a little nervous about actually buying the stuff. We first looked online at the prices, and found quite a few cheap options, so we were conflicted. We went into the brewing supply place in Corvallis to check it out and we looked at the prices and they told us that their list of kits were on the website so we decided to go back and compare the stuff online with the stuff at the store.

First, the website didn't work, but eventually we got it sorted out and we determined that the store was a little more expensive. But we decided that we would probably get better help there if we built a rapport with the guys who worked there in case we had any problems later on.

So the guys there are really cool, and I highly recommend them if anyone in Corvallis is looking to start brewing. Anyway, enough about that, on to the .... "exciting" part. The brewing of our first batch of beer!!!

We decided to go with a stout since then we don't have to be careful about it being clear since it is already dark.

So the first step of the process is that we had to take the yeast out of the fridge. And we had to do this at least an hour ahead of the start of the rest of the process. We did this as soon as we got to my place, and then we had some supper. Beer soaked brats! We watched the baseball game while we ate. And we ended up starting a bit later then we anticipated, but ... we were hungry! Also, Eric eats slow :p.

So Chris B and Andrew, who were going to show up sometime in the middle of the process, ended up showing up before we even started.... lol, I am not sure if the were disappointed or not, but it worked out, and I am glad they were there for the whole process.

So then we actually started. The first step was to fill our bucket with about 3 gallons of water. We did not plan well and my biggest measuring cup was 2 cups... :p We needed to fill it with 48 cups! So we took the two cup thing and filled up a pitcher until we knew were 10 cups was. This was a little bit better. And the bucket soon contained 3 gallons. 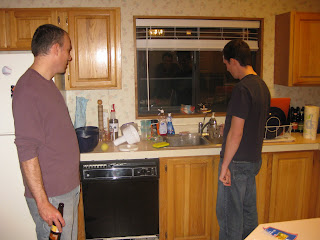 Eric fills the pitcher with water!

Next we had to add the specialty grains or malts to the water and raise it to a certain temperature. The grains for our beer were:
Luckily, the brewery place ground them up for us, which was great. So we added those to our little mesh steeping back, shown below, and then we added it to the pot. We had to add a little bit of water so that most of the grains were under the water, so we ended up with 4 additional cups of water. 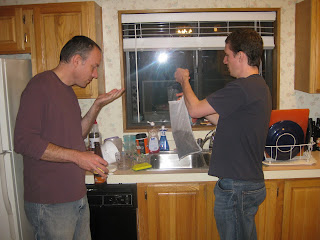 Pretty soon the water was dark, it happened so quickly, as you can see below. We also added a thermometer, as we had to heat the water to 170 degrees. The thermometer was deftly tied on by Chris B. 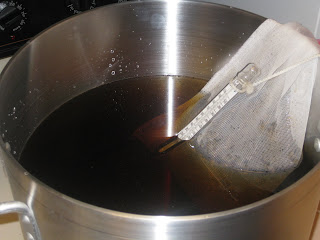 The next step was to wait for quite a long time. We had to wait for the water to heat up to 170, which ended up taking about an hour, so I think that next time we are probably going to turn the heat up a little bit. So that meant we had time to dink around. 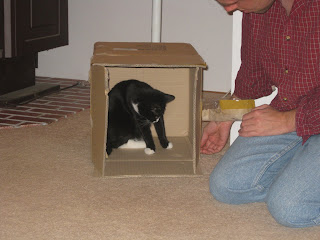 Sprinkles got to play in the box that the pot came in. 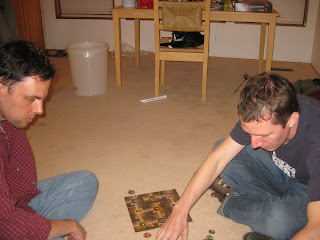 And then she watched us play a board game. She was good and didn't run across it much... only once or twice :)
So once the water finally got to 170 degrees we had to turn the heat off and let the grains steep for 10 minutes to get the flavor out as much as we could. After we did this, Eric squeezed the bag to get even more out. This wasn't in the instructions... so if the beer is horrible.... we can blame this ... or many other things we probably did wrong :)

So then we had to add the Malt Extract, which is shown below. This stuff was very very thick, it was sort of like molasses a little bit. We all tasted it and... it was ok I guess... lol, but anyway, into the mix it went! We had to get as much out of it as we could, so we ladled water into it and mixed it around and Chris B managed to get most of it. 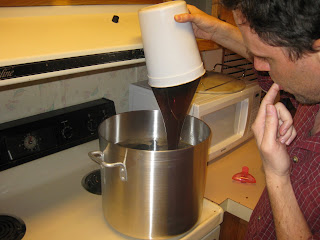 Then we had to bring the mixture to a boil. So we stirred the extract very well to avoid it burning and sticking to the bottom and brought it to a boil. We then had to add the hops to the beer. In our case we were adding 1.5 ounces for the whole 60 minute boil and then adding .5 ounces for the last 10 minutes. 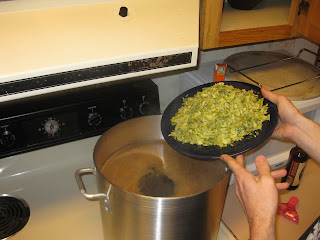 And then dumped into the mix they looked like this. 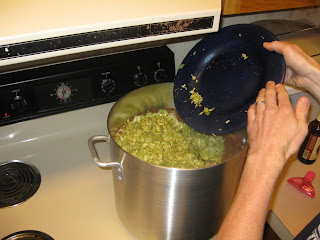 We had to stir them around and fully saturate the hops so that there wouldnt be any thermal blanket that kept the heat in and messed things up. 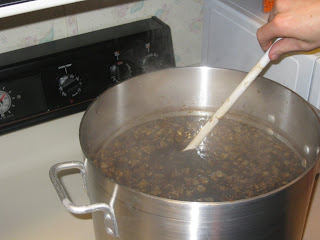 So then we had to watch it carefully since we didn't want it to boil over, but either my stove isn't powerful enough, or our pot was too large, or.. something, but basically we our just natural beer brewers and so we just didn't ruin it! Woo hoo!

So halfway through, after 30 minutes we added Irish Moss, which is neither Irish, nor Moss, but seaweed. It helps to clarify the beer by coagulating the proteins. We also added gypsum which will harden the water. I already have pretty hard water so we didn't add as much as the beer called for. er... the recipe called for.

With 10 minutes left we added the last of the hops. And then I went to get the ice bath ready so we could cool the beer. I dumped 2 bags of ice into tub and then filled it up with water. Sprinkles was, as you can see, very interested in the water. I had to pick her up and move her so that we could put the pot in. 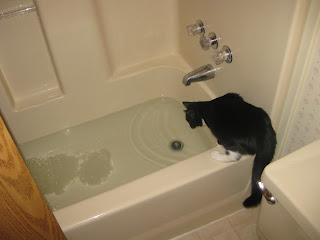 We had to add it carefully so that none of the water splashed into the mixture since now we need to be extra sanitary and careful. Here Eric is cooling the pot and mixture by rubbing ice against it. 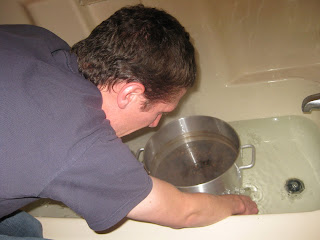 And here he takes the temperature. We had to cool it off to about 75 or 80 degrees so that could add the wort. We managed to make it to about 85 or so and we called it good since we knew that we had to add cold water to it before it was done.

Here, Eric takes the temperature of the mixture. 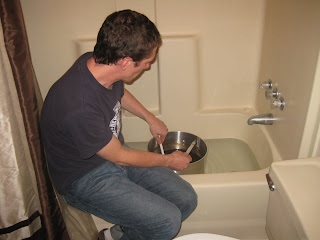 Sprinkles really wanted to get in and play with the water.... a lot. 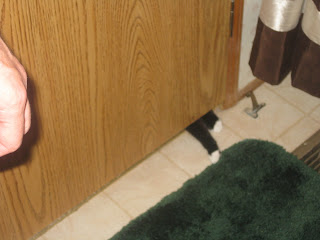 So once it was cooled, we had to filter the hops out, so we bore the mix out and filter the hops and then poured water threw the hops to get more of the flavor out.... we had a very small filter. We might need to get a bigger one next time. I used a spoon to scoop the hops out and a few got into the beer... another potential reason our beer could taste bad. 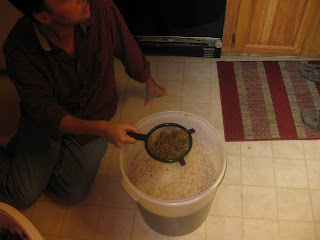 So then we had to aerate the beer, which basically just meant that we would be shaking it and getting it all frothy. And then we tossed the yeast in and sealed it up and we were done!!!

Oh, we also took a hydrometer reading. Which consisted of using a turkey baster to get some of the mixture out of the fermenter (the bucket). This tells us exactly what the potential alcohol volume of our beer is. It will probably fall a bit, but this is the max that it could be. At the time our max is about 7.5%

And then we sealed the beer and we were done!

Our beer all shaken and sealed! 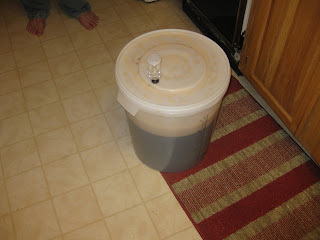 Our first beer all nestled into the closet! 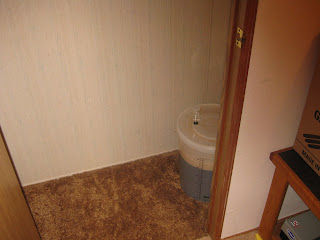 The beer has begun fermenting, which is great news and we are getting some bubbles. We should get a lot at first and then it will decrease until it is only bubbling once a minute and then we will be onto the next step.