Yesterday we made our third batch of beer, as well as did a long awaited taste test of our second batch, which was a brown.

Sadly, it seems like we did not quite get the process totally down, and we aren't naturals as we thought after our first batch that turned out amazing. So the beer itself tastes pretty good, however, it is kind of rare that we get a bottle that actually has good carbonation. It seems like most of the bottles we have tried have ended up flat, which was disappointing. So I have begun the process of shaking bottles every day to hopefully agitate the yeast and get a little bit of carbonation. It is like my own version of the shake weight.... only slightly less suggestive. :p

For our third brew we decided to make a wheat. Mainly because Eric wanted to try a beer that used only one kind of malt. This way, we will know how the malt affects the beer and thus will be able to make our own recipies. I am skeptical of this, but wheat beer is fine with me, so I went along with it.

Mainly I am skeptical because there are so many different variables in the recipies, sice as different kinds of yeast and different kinds or hops and then the extract, so I am not sure that we will be able to tell... but its a nice thought.

For this brew, we had a guest brewer, Rob Hess. We told him about our brewing after one of our basketball games and he was pretty interested and wanted to see what it took, so we invited him to brew with us, and see how easy it was. 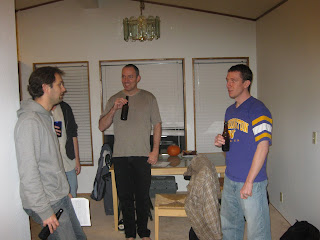 As always we started slowly, we tried our beer and cleaned the stuff and then put the malt on the burner. Unfortunately, we forgot to .... actually turn the burner on. But once we got that going, everything went well.

This beer is much lighter than what we have made in the first two brews. We can even see the bottom of the pot! 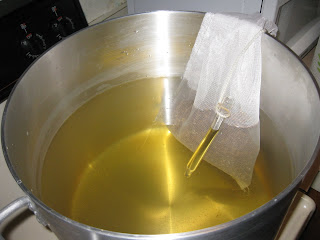 The beer eventually darkened up as it got hotter and closer to boiling. 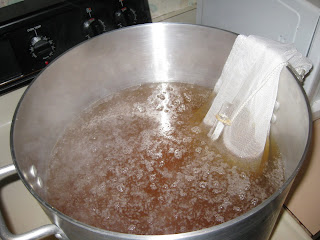 We took the malt out and then brought it back to a boil. And then it was time to add the extract. Unlike the last two beers that we made, this recipe called for a dry malt extract, which wasn't quite as fun as the syrupy extract, but it was certainly interesting. 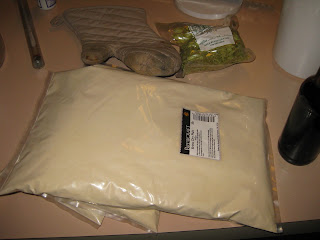 It also made the beer really foamy.... 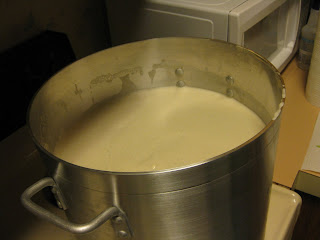 The rest of the process was pretty similar and hopefully it will turn out well. Rob seemed to enjoy the process and said he made get a kit of his own. So more beer makers! Woo hoo... we are slowly making the world a beerier place!

Posted by The Elephant at 1:42 PM No comments:

Since our brewery has taken off we have been able to bring it a beat writer to follow our awesome basketball team, and also to practice his written english.

His review of our latest game is below: (Note the pictures are from a previous game)


It was a wonderful win for the team!

Our team did pretty well at the beginning of the game. The other team got the ball to start, but Eric stole the ball and passed the ball to Jun. I wished that he had taken the shot. In the next minute, Eric again passed the ball to Jun, who made a shot. After that, Chris shot successfully, with an assist from Jun. In the first two minutes, we scored 4 points.

In the following minutes, we were stuck on 4 for quite a while. We shot several times, but we missed all of them. In addition, we had many turnovers and fouls. The other team got several points during this time, especially the big fat guy, who may be the best player on the other team. After eight minutes, the scores was 4 to 7. In another following three minutes, we still didn't score a basket.

This is maybe one of the patterns about how our team performs. In the last game, we scored the first 9 points of the game and then we were stuck for a long time, while the other team scored 19. I should check whether our performance follows the 80/20 rule, which is very common in computer science. Newton's law has taught us that objects at rest remain at rest unless acted upon by external force, which implies that one needs more effort to get points when the team is in a stuck state than when it is in a regular state.

Back to the game, we recovered thanks to Travis's successful shot at the 11th minute. After that, we got many good passes and shots. For example, Travis passed the ball to David who made a shot, Alan made one of two free throws, and Eric had a nice shot, which must have been too nice since it caused an argument between our team and the score keeper who didn’t record Eric’s shot. 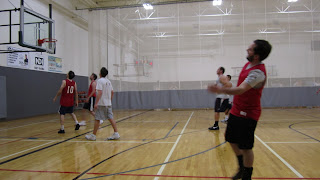 This momentum was kept for the remainder of the first half. Eric got another basket in the following minutes, followed by Jun making another field goal and one of two free throws. Jun then had a nice drive and pass to Rob, who made our first three-pointer of the game. The other team was lucky and did well too. In the last 25 seconds, they got a three-point from way behind the arc. At the end of the first half, the score was 19 to 24.

During the break, Duc and I had an interesting talk with the score keeper. He though that we were from KFC and were selling fast-foods. In fact, we are doing (E)lectronic things rather than (F)ood things and we are the KEC team.

In the first several minutes of the second half, we did OK but they did really well. We got two two-pointers during this time: David got a nice offensive rebound and put back, and Chris made a good pass to Jun and Jun made a layup. Meanwhile, the other team scored about 11 points, I guess. The big fat guy made several three-pointers and the black guy (maybe I should not say this, but how else should I describe that guy?) made both his free throws.

In the fourth minute of the second half, there was a huge mess. We had the ball, tried to shoot but missed, got the rebound, and then tried and missed again. This process was repeated several times, finally Chris passed the ball out to Travis but he missed it.. The whole mess ended when one guy on the other team hurt himself accidentally. The injury was so serious that he had to lie on the ground for several minutes before he was able to be helped off the court. 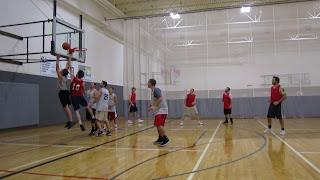 The next several minutes were close. Although they scored four points, we got five. Travis hit a three-pointer with the assist from Jun and Alan made a two-pointer with an assist from Chris. We were ahead 44 to 43.

Our lead was expanded in the following minutes. Chris stole the ball and made a layup. Then Jun passed the ball to Alan for a layup. On the next possession Travis made another three-pointer. After this the other team seemed to lose its morale. They did not score in that time, even missing their free throws. The game ended with several fouls from which we got another three points. Jun made one of two and Travis made both of his free throws. The final score was 54 to
45. 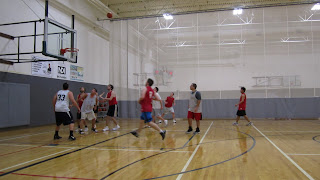 Besides our shooting, our performance for the overall game was good. It was quite impressive that Alan got 5 rebounds in the first several minutes and that pace was kept for the whole game. David also got some nice rebounds. Eric's defense, Jun's passes and the others’ perfect cooperation all contributed a lot to the success of the game.

Thanks for your guys' playing. You all as a whole made the game interesting, exciting, impressive and successful.

Posted by The Elephant at 12:02 PM No comments: