A couple of my friends went on a trip to Ireland and so in honor of that I decided to try making something that was kind of Irish.  I settled on trying to make a version of Shepards Pie.
Over all, this recipe was pretty easy to make and was also pretty good.  I made this and took it over to Eric and Allison's and watched the first presidential debate with them.

Here is a (kind of blurry) picture of the final result: 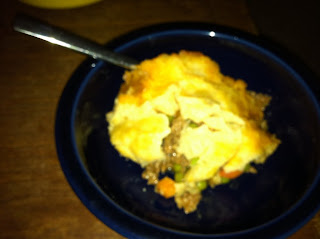 The only change that I made was the type of meat that I used.  I didn't really want to make lamb and so I decided to just use ground beef instead.  This may have made it less authentic, but I felt better about it.

I guess that I also changed in that I didn't use a Dutch Oven, I just cooked this on the stove.

This was a kind of involved recipe, but still wasn't too bad.  Perhaps that actually means that I have improved as a cook?

Anyway, the first step was to chop up the potatoes and cook them. 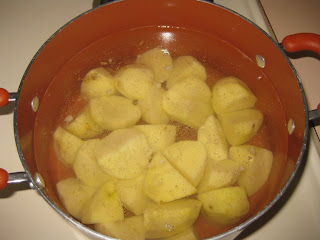 While they were cooking I started the meat mixture.  I cooked the ground beef and then added the veggies. 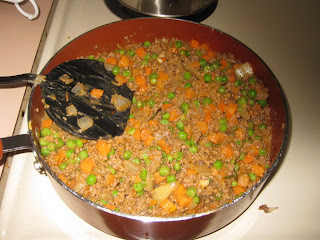 Once that was done, I spread it out in a 9x13 casserole dish. 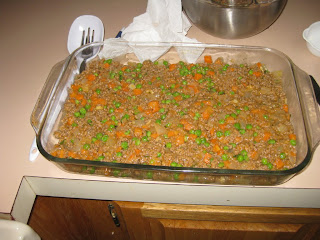 Once the potatoes were done I added the cheese, milk, and other assorted ingredients and mashed it all up. 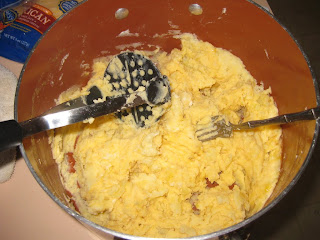 I then spread that out over the meat mixture and put it in the oven. 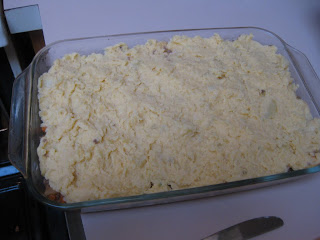 I took it out when the edges were bubbling and the potatoes were golden brown. 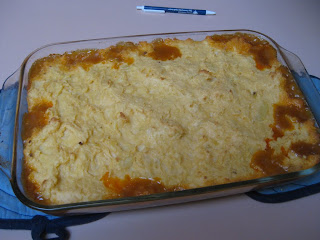 And once again, here is the final result.

I really liked this recipe.  I thought it was really good.  I think it might be better served with something as a side dish... but I am not sure exactly what.

While there are a lot of ingredients and instructions, this dish was actually pretty simple to make and was also really good.
Posted by The Elephant at 9:31 PM No comments:

While the last few recipes were simple and not all that impressive, I was super pleased with this one and it was also really simple.  I am not sure exactly why I decided to make pulled pork, I think I was just looking at recipes and found it. One thing that appealed to me was that it used a slow cooker.  I have managed to indefinitely borrow one of those from Eric and Allison.  So I figured that I might as well actually use it.

Regardless, I have made this 4 times total and everyone that I have shared it with has really liked it, so I think that is a good sign!

Here is the final result.  I had it with sandwich form with coleslaw in the top: 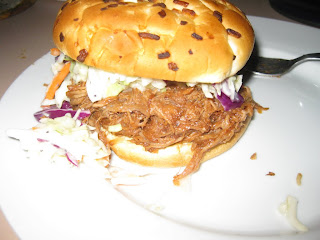 Because of the increase in size, I also increased how much soda and BBQ sauce that I used.  I used to bottles of root beer and two bottles of BBQ sauce, instead of the one recommended.  The type of root beer doesn't really matter, I would recommend Sweet Baby Ray's BBQ sauce, since it is really good, but if you have another favorite, I am sure that would be great too.

The final change, which I think made a big difference is that after I am done shredding the pork  added it back to the slow cooker with the BBQ sauce and cooked it for another hour.

So at first I was unsure about cooking the pork in the root beer.  I wondered if it would make it taste weird, or like root beer.  So I did some research and basically the root beer simply is used to soften up the meat.

I added the pork shoulder to the slow cooker and then put the root beer in.  The root beer didn't quite cover up the pork, but I figured that was OK. 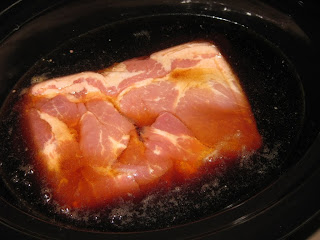 This is what it looked like when I was ready to take it out of the slow cooker. 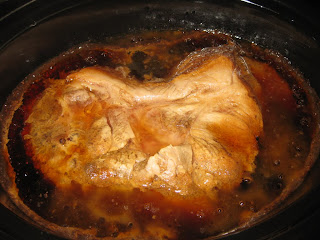 This might have been one of sprinkles favorite dishes that I have made.  She snarfed down as much pork as I would give her. 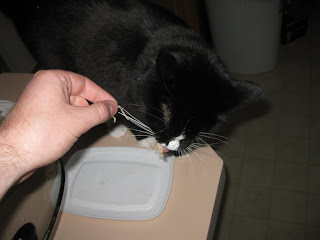 To separate the pork I put it on a cookie sheet and then used two forks to pull it apart.  I made sure to separate the fat from the good meat.  You can sort of see it off in the corner of the sheet in the picture below. 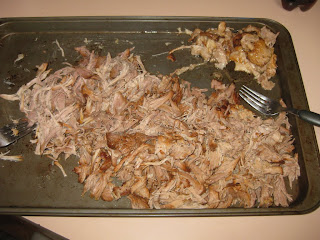 I then put the pork back in the slow cooker and added the BBQ sauce.  It then cooked for another hour. 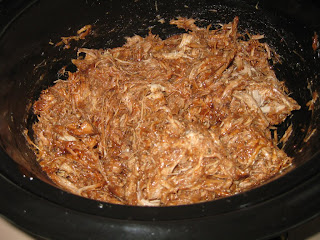 While that was cooking I made some coleslaw and used that to make the sandwiches.

I thought that this recipe turned out amazing.  The pork is really good, and this has been confirmed by the people that I have shared this with.  In later iterations I used Kaiser Rolls instead of hamburger buns.  I though that the Kaiser Rolls were much better and would for sure recommend those.
Posted by The Elephant at 8:16 PM 2 comments: