So I was a little unsure about what I wanted to make this week, but after much research I decided to make Pork Tenderloin.  I actually wasn't entirely sure what Pork Tenderloin would be like.  The recipe also included shallots, which I had never used.... so lots of new foods!

The recipe that I used was this: Link

I didn't really make many changes.  The only thing that I did was I used olive oil to brown the pork tenderloin.

So I coated the pork tenderloin liberally in mustard. Note: One package of tenderloin contained two tenderloins.... I am not sure if this is normally... and the packaging does not make this clear at all. 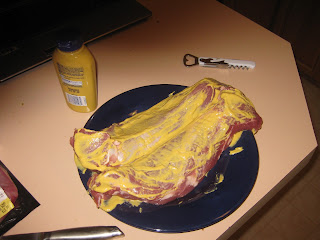 This made my assistant interested in what the weird coating on the tasty meat was. 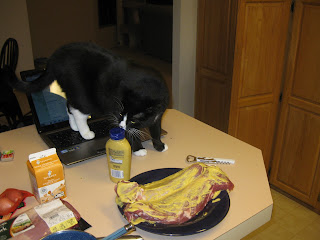 Sprinks then checked out the olive oil that I had started heating up. 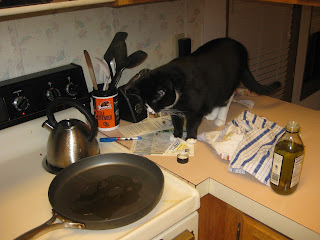 I used the biggest frying pan that I had and the tenderloins still barely fit.  I browned them for about 5 minutes, flipping them a couple of times.  Just to sort of brown them on each side. 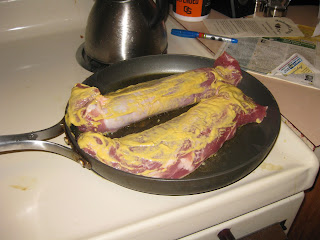 Then into the oven they went.  Again, I oiled the pan with olive oil. 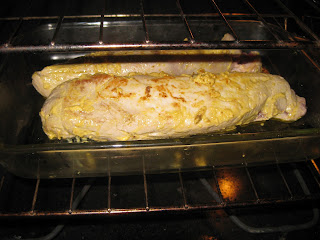 As that was cooking I made the sauce.  The first step was the chop up the shallots, which actually made me tear up a lot more than onions, which surprised me a lot.  I cooked them in the same pan that I browned the meat in. 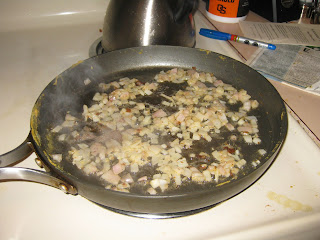 After they were soft I added the Marsala and the cream and cooked it.  The recipe says until half of the liquid is gone.  I ended up cooking it for about 12 minutes. And it was great! 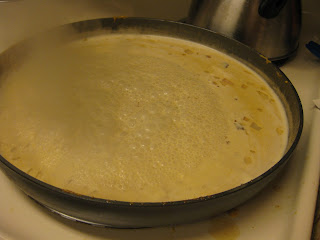 After 20 minutes I flipped the tenderloin and I put in a meat thermometer.  After the second 20 minutes the pork wasn't quite done, so I left it in for a few more minutes.  Then removed it and sliced it up.  Here is a side view. 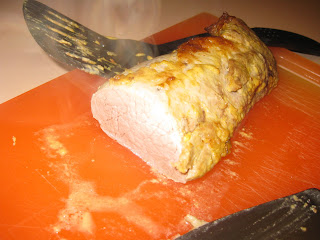 This interested Sprinkles a lot more than my more recent recipes. 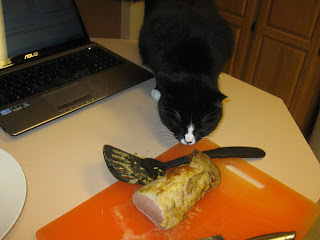 The picture below doesn't particularly do this dish credit.  It was really really good.  The sauce was just amazing and really made the dish.  I am a little hesitant to rank this ahead of the ribs since I love ribs a lot... but this is was great. 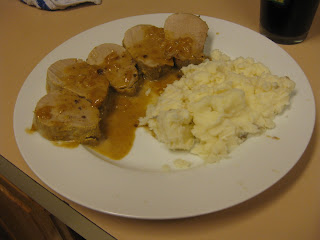