In Which I Steal Eric's Blog and add pictures!!

So Eric's blog post was pretty darn verbose, and I don't know if I can beat it. In an effort to have the better blog, I am adding pictures from my camera. Luckily, Eric forgot his camera cable, so I have the upper hand. A picture is worth a thousand words right? So that will mean I have a lot of words. None of these pictures contain me... those are on Eric's camera. 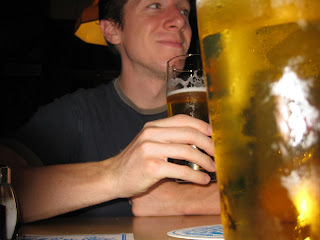 I would like to say this was meant to be an artistic shot, and it actually turned out quite well. However, I was just scared of the barkeep and was trying to take the picture as secretly as possible. One thing I've noticed here: all the people that I get food from seem like they dislike me..... 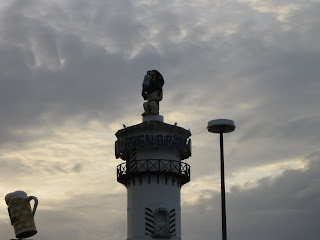 So this is in the middle of the fairground type area where they were setting up Oktoberfest, I am not sure if this tower is always there, but it was pretty cool. Somehow there is a floating beer mug, which I didn't mean to get, but it looks... interesting? 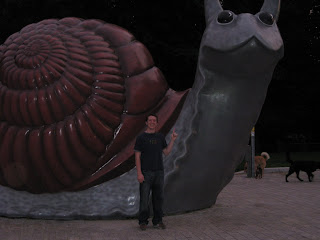 The citizens of Munich are larger and slimier than expected.
While walking around on our first night we ran into this giant snail. It was nice enough to let Eric pose without before it meandered off into the Germany night. For some reason dogs really liked this statue. 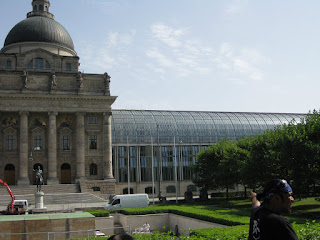 Some German Building with our tour guide.

This is some famous building that I don't remember off the top of my head, but this picture was added because it has Frankie, our bike tour guide. He was a really cool guide and can supposedly drink 7 liters! of beer in one night. (I am not sure what to think about that, I am pretty sure I would be dead the next day, he was giving a tour) 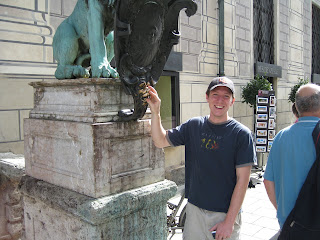 Touching the lions for luck
This is one of the four lions that we could touch to bring good luck, considering that the day was pretty good and we lucked out in some things, the lions must have worked. 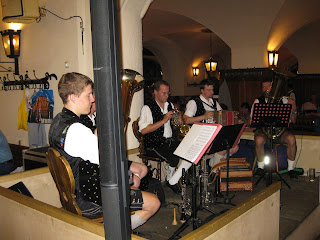 An Oom-pah Band at Hofbräuhaus
To be honest I would have rather have gotten a picture of a Bavarian beer maiden, but I had 2 liters too few beer so I chickened out, and they were just working... So I took a picture of the band. They were pretty cool... not as cool as the beer maidens though.

All in all it was a fun day, don't worry I saved plenty of pictures to bore you with upon my return to the states.

A beer is a beer, unless its a german beer?

In a vast departure from the normal posts on the blog, and because I have to make sure the truth is told, not Eric's half truths and fabrications... I may post some adventures from our trip in Germany.

Eric's post summed up a lot of the day, needless to say I have now been up for 24 hours straight, unless you count the 1 hour where I tried to sleep on the plane and may have dozed off... So perhaps it is 23/24 hours.

It is good to finally stop traveling, although now that I have stopped I don't know if I want to get up and get a beer. It is quite a quandary....

Anyway, Eric and I arrived safely and are enjoying all the amenities of not being crammed into a jet.
Posted by The Elephant at 8:40 AM 2 comments: