So the next recipe that I decided to try on my great journey was Jambalaya.  I actually thought that it was always spelled Jumbalaya.... luckily lots of other people seemed to as well, since the search auto corrected.

This is the recipe that I went with: Link

The first change was that instead of Peanut Oil I simply used olive oil, this was simpler and I already had it, and a lot of people recommended this change.

The next change was in the type of sausage that I used.  I didn't really have access to Andouille sausage so I substituted spicy Italian sausage instead.  It seemed to work fairly well.  There were a lot of recommendations for Kielbasa, so I suppose that would work as well.The recipe called for slices of sausage, which based on what I used was not a simple thing as the sausage was a little mushy.  I ended up cutting them and them pushing them down a bit, the end result is below. 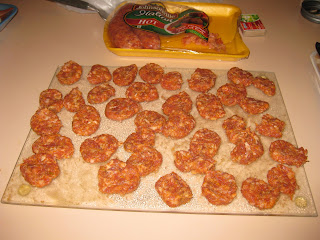 After seasoning them with Cajun Seasoning (which amazingly seems to be sold at any local supermarket), I put them in the pot with 1 tbsp of olive oil and cooked them up.  To season I simply poured the Cajun seasoning on the slices, then flipped them over and did the same for the other side. 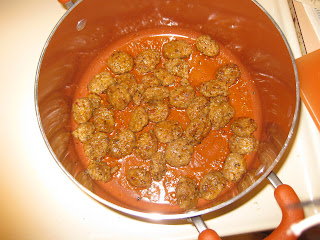 The chicken was similar.  I think that I cut the pieces a little too large, at least some of them.  There are some recipes were you cook the sausage and the chicken together, but I actually thought that cooking them separately was good... though I am not sure why. It just seemed right. 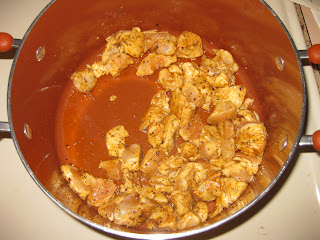 To help break up the monotony of hearing about cooking, here is my assistant chef "helping" me by sitting in front of the recipe. 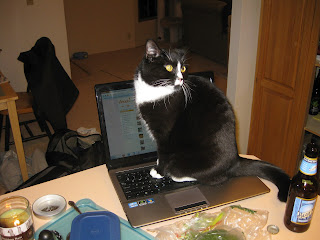 After the meat cooked, I set that aside and sauteed the veggies and spices. Then added the meat back in.  The resulting picture is below.  It kind of looks a little bit weird.... Since I was planning on adding shrimp at the end and added a little more meat than the recipe called with I went with a much bigger can of crushed tomatoes. 28 oz instead of 16 oz.  A few people made this recommendation because of the rice, however, I am glad that I did it, because without it, this would have been even more meaty than it turned out. 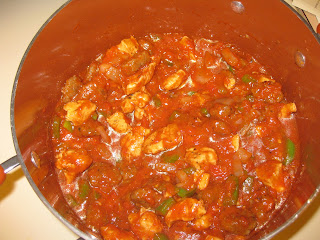 My assistant relocated to the top of the cabinets where I couldn't shoe her away and she could make sure I did everything correctly. 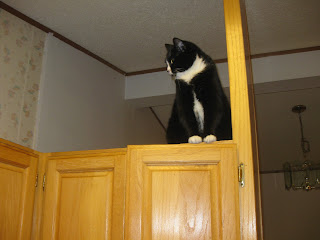 The next change that I made, again based on recommendations was how I handled the rice.  The recipe calls for chicken stock and uncooked rice.  But this seemed a little wonky to me.  A few of the recommendations said they cooked the rice first and left out the stock. So this is what I did.

After adding the rice, the jambalaya looked like this. 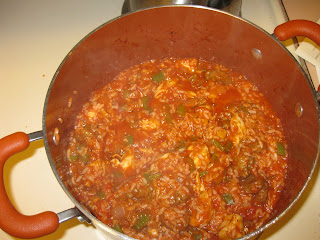 I let it simmer for a total of 20 minutes. With 7 minutes left I added some shrimp, just to add a little flair.  The white/pinkness of the shrimp stood out against the rest of the dish. Of course that was soon remedied by stirring it together. 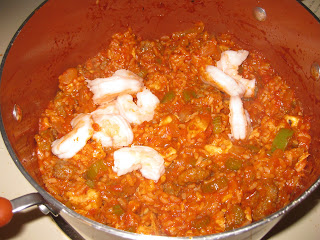 Finally the dish was done!  I wasn't sure what to have as a side dish... so I just had the Jambalaya.  Considering how meaty it was this was fine and one bowl was enough to satisfy me.  It was also pretty good, so I was pleased with the result. 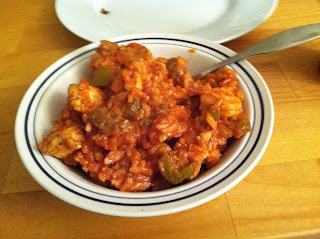 The only change that I would make is I think it is very important to cut everything up before hand.  I tried cutting things one at a time and them adding them, but the meat cooked much too fast for me to finish the veggies before I actually needed all of them.  A few minutes more prep time would have made the process much simpler and easier.
Posted by The Elephant at 11:22 PM No comments:

So one of the things that I have decided to try this year is to cook something new every week.  This was designed to accomplish an increase in my cooking abilities and also to have new food all the time.

I don't think that what I normally make is bad, but I really wanted to try new recipies.  The first two recipies went well enough, and then I decided to make sure that I actually remember what I am doing and chronicle the journey.

So the third recipe was this week and I decided to try something that I have always wanted to make, Baby Back Ribs!

I went with the most highly rated recipe from Allrecipes.com, and it was also really simple so that helped a lot.  Here is the recipe, and a link:

So I made one major change based on the reccomendations of other users.  Instead of using BBQ sauce I decided to use a dry rub instead.  This is the dry rub that I used:
I think that it might have been supposed to be for a bigger rack of ribs, but I just used this on one rack.
Here is a picture of the rack with the dry rub, about to go in the oven. 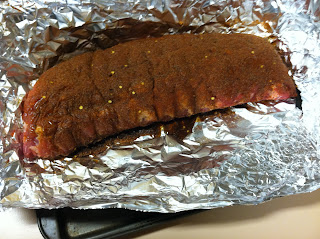 After cooking the ribs for 2.5 hours I took it out.  Then I rubbed some BBQ sauce on the top of it and put it under the broiler.  I probably broiled it for about 10 minutes.  Here is a picture of the ribs after being cooked. 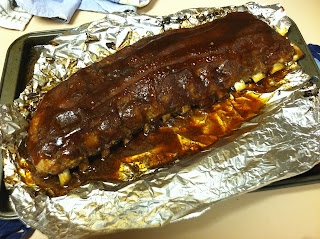 Finally, a picture of the ribs ready to eat.Overall, I was pretty impressed with the result.  It was really simple and it turned out really great.  If anyone want's to make Baby Back Ribs I would certainly reccommend this recipe. 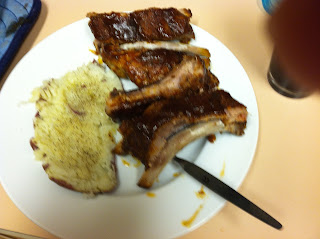