Over the thanksgiving break I had a duck breast at a restaurant in Eugene.  I thought it was really good, though perhaps a little rawer than I would have made.  However, that made me really want to try out making duck.  I was debating between two recipes, one with peaches and one with plum.  Since peaches aren't really in season I decided to go with the plum glazed recipe.

In addition, I also decided to make a quinoa salad to go with it.  I must admit that when I first tried quinoa I was a little skeptical, but I have really enjoyed a lot of the recipes that I have made with it.  I think that one big difference is making it with broth instead of water.  I think that adds a lot to the flavor.

Just a note, you might have noticed that this is recipe 42, and it happened in late November.  Which basically means that to reach my goal of 52 in a year I would have to make 10 recipes in the month of December.  It was a daunting challenge, and I wasn't sure if I was going to be able to make it, despite being behind on blogging, I swear that I did!

Here is the final result, primarily of the duck, but you can see the salad in the background. 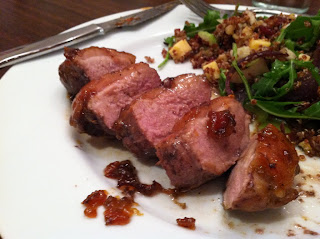 Here is the recipe that I used for the duck: (Link)

Position a rack in the center of the oven and heat the oven to 425°F. Trim any excess skin and fat from the duck and score the remaining skin and fat underneath in a 1-inch diamond pattern, taking care not to cut the flesh. Pat the duck dry and season generously with salt and pepper.
Heat a 12-inch heavy-duty skillet over medium-high heat. Put the duck in the skillet skin side down, reduce the heat to medium low, and render the fat until only a thin, crisp layer of skin remains, about 8 minutes.

Turn the duck over, carefully spoon off most of the fat from the skillet, and brush the preserves mixture over the breasts.

Transfer the skillet to the oven and roast until an instant-read thermometer inserted into the thickest part of a breast registers 135°F for medium rare, 8 to 10 minutes. Transfer the duck to a cutting board and let rest for 5 minutes. Meanwhile, tilt the skillet and spoon off as much fat from the pan juice as possible. Slice the duck diagonally into 1/4-inch slices. Arrange on plates and spoon the pan juice over. Sprinkle with the scallions and serve.


And here is the recipe that I used for the Quinoa Salad: (Link)

In a bowl, rinse the quinoa with water, rubbing it between your fingers for about 10 seconds. Drain and transfer it to a 3-quart pot. Add 2-1/2 cups water and 1/2 tsp. sea salt and bring to a boil over medium-high heat. Reduce the heat to medium low and simmer, covered, until the quinoa is tender but still delicately crunchy, about 15 minutes.

Drain the quinoa and return it to the pot. Cover and let the quinoa rest for 5 minutes; then fluff it with a fork. Let cool to room temperature.

While the quinoa cooks, heat 2 Tbs. of the olive oil in a 12-inch nonstick skillet over medium-high heat. Add the onion and a pinch of salt; cook, stirring frequently, until tender and brown around the edges, 6 to 8 minutes. Add the balsamic vinegar and toss with the onions until the vinegar cooks away, about 1 minute. Remove from the heat and let cool to room temperature.

In a small bowl, whisk the remaining 3 Tbs. olive oil with the sherry vinegar, 1/2 tsp. sea salt, and a few grinds of pepper. Add the dressing to the salad and gently mix it in. Let rest a moment; then season to taste with salt and pepper. Add more olive oil if the salad seems dry.

I made two minor changes to this.  The first is that I used chicken broth to cook the quinoa in.  Also, it should be noted that I didn't wash the quinoa since I buy the prewashed brand.  However, if you don't buy prewashed quinoa, you need to make sure to wash it, otherwise it isn't going to taste very good.

The second change was that I did not add 4 oz of arugula, that seemed like way too much.  I might have added 2.5 or 3.  But I would recommend adding as much as you want.

The first step in cooking the duck was to trim the fat and score the skin.  Here I have laid them out.  To trim it I just cut a little bit of the skin off, since there wasn't a lot of fat.  Scoring the skin was a little tough, mainly because I wasn't exactly sure what I should do.  So I basically just cut the skin in diamond patterns and tried to make it a little deep, but not deep enough to reach the skin. 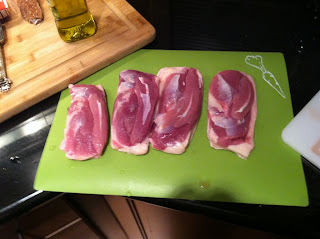 Once that was done I put the breasts in the skillet, skin side down. 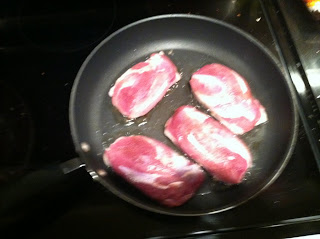 After a few minutes, I flipped them over, the skin was crispy, so they were pretty much done. 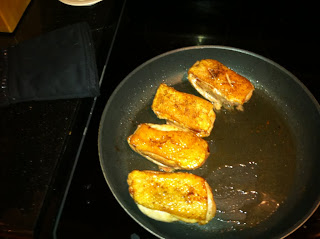 I spooned over the plum preserve and then put them into the oven to cook them. 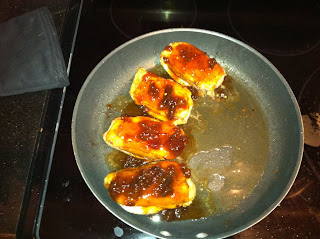 Meanwhile, probably actually before most of the duck work, I worked on the salad. Here is the Gouda and onions chopped up. 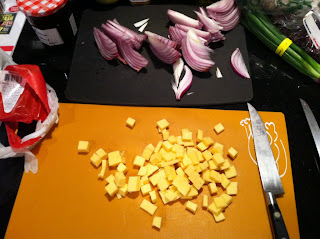 Most of the steps of this is pretty simple.  I cooked up the onions and quinoa and then mixed it all together.  You can see in the picture below that this looks like a lot of arugula, and that isn't even all that the recipe called for. 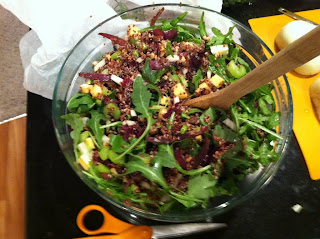 Here is is mixed up a little bit more. 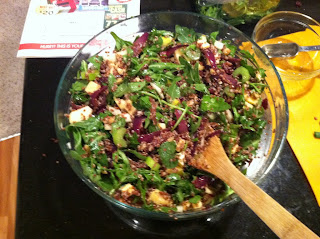 Again, the cook time for my duck was a little bit shorter, but I took it out based on the thermometer.  I actually cooked it a little high. I think I probably went to 150 instead of 135.

And here is the final result. 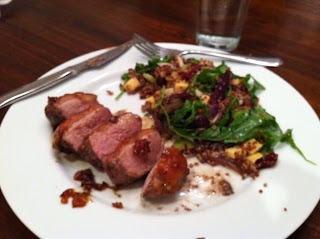 I thought that both of these recipes were terrific.  The salad was really good, especially with the guoda and cranberries.  The duck was also very good.  I wish that I could have got not frozen breasts, but that was ok, this was still a great recipe.
Posted by The Elephant at 1:20 PM 2 comments: