Sometime over the summer I was buying some meat from the meat section of the grocery store and looking at the fish.  I have never really been that impressed by the fish selection, probably because I am used to having a really good selection of fish in Oregon.  As the meat guy was wrapping up my purchase he started talking about how he loved making fish tacos with the cod there.

So I went back and looked up some recipes.  There are a ton of fish taco recipes out there, but I decided to choose one that looked really simple, but also seemed like it would be tasty. 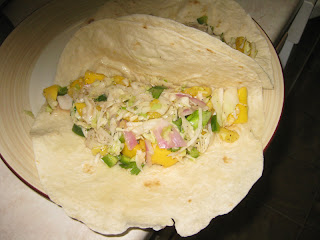 The first step was to cook the fish.  I seasoned it a bit with salt and pepper and lemon juice.  However, I definitely think that I didn't season it enough.  I think that the fish ended up fine, but it was a little bland.  There might be other things that would be good to season it with, but I don't have that expertise. 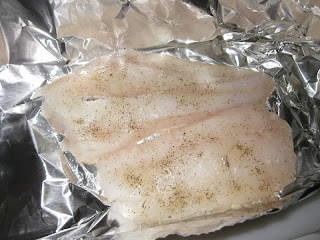 While the fish was cooking I chopped up the mangoes, which was something that I had never done before.  The middle of the mango is this huge put that takes up nearly half of the fruit, so it was interesting working around that. 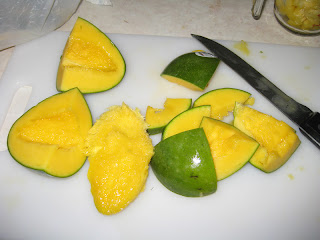 Here is the base of the coleslaw, the cabbage with some cilantro and the jalapeno. 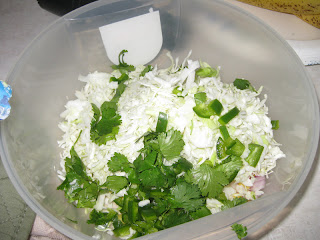 Soon the fish was done.  I have to say that pictures of cooked cod don't look much different than pictures of uncooked cod.  I also cooked this for a little longer.  It wasn't quite flaky enough after 20 minutes. 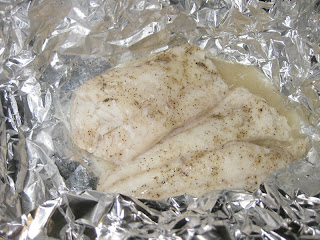 I was in Texas while I made this recipe, but somehow Sprinkles managed to get tangled up in my laundry! 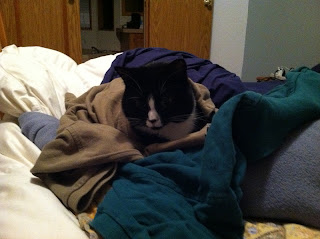 After the slaw was done I constructed the tacos.  Here is the tortilla with the fish. 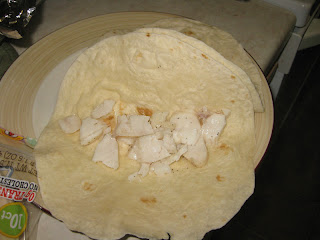 And here is the final result again, now with the slaw added.

I thought that the slaw of this recipe was really good.  The fish was pretty simple and a little bland, but the slaw carried the tacos and made them good.  I think a little more seasoning of the fish would certainly help, but overall this was a simple recipe that was very easy to make and tasted good.

Posted by The Elephant at 8:36 PM No comments:

I don't make many vegetarian dishes, but at some point during the summer I found a couple of zucchini recipes that sounded really good to me.  This particular one was a casserole that included a bunch of veggies and rice and then the whole thing is covered in cheese.

Here is a picture of the final result. 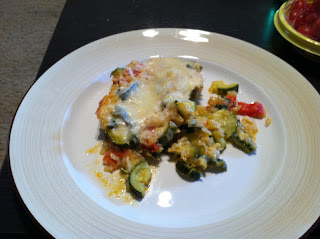 Here is the recipe that I used(Link):

This was actually a really simple recipe to make, I started the rice and then  mixed all of the zucchini together with the green onions and garlic. 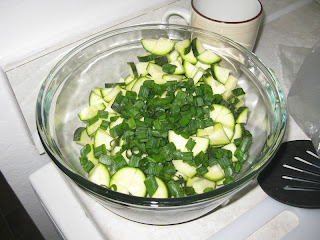 Then I put it in the only skillet that I had over the summer, it was slightly small, but still worked pretty well. 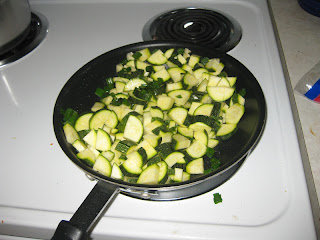 Since the rice wasn't ready yet I decided just to mix everything together and cook it a little until the rice was done. 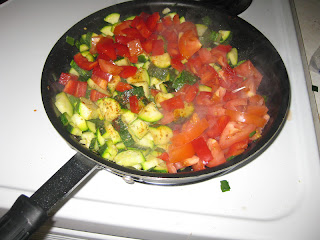 So I added the remaining veggies, spices and cheese and then heated it for a little bit. 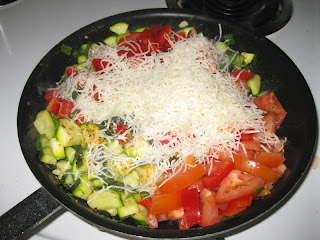 Since I didn't think the rice would fit in the skillet I decided to mix everything together in the pan. 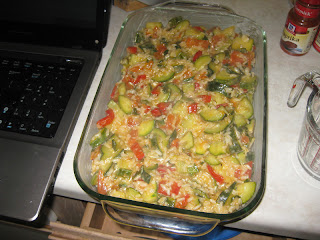 I then added the cheese and put it in the oven.  All in all a very simple dish to make. 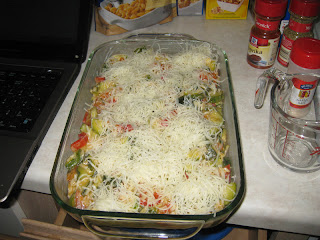 I was surprised, but I really liked this.  I think that the herbs made this very flavorful and kind of salty, which usually makes everything a little better.

I do think that this might be best as a side dish or not a stand alone main dish anyway.  I had a salad with it, but it definitely seemed more like a side to me.  However, it was very good.

Posted by The Elephant at 4:47 PM No comments: