Celebrating Independence with .... a waterpark!

For the Fourth of July we got Monday AND Tuesday off of work, which meant that we had a lot of time to do stuff. Our main plan was to go to Schlitterbahn on Tuesday. We figured that while most people would have Monday the 4th off, they probably wouldn't have Tuesday off and we would have free reign over the park. It was a pretty genius plan! But that is a tale for later down in this post.

Saturday, July 2nd
Friday was pretty slow. Jacob and Kyle were a little bit hermity and didn't want to do anything. Kyle appeared to want to do something, and even said as much, but then when I tried to find something that he actually wanted to do.... I couldn't. I was sort of at a loss of what to do. But I wanted to do something. So I decided that I was going to take a trip to Fry's and then head to The Monument Cafe, which was about 30 minutes away. This place had been recommended to me by a guy who works in my group.

Side Note: If you want food recommendations ask as many people as you can. So far I have asked about five different people (I suppose 6 if you include Andy's recommendation of as much Chuy's as possible). All of their responses have been different and thus my list of places I want to eat has grown quite a bit.

Anyway, Owen, the guy who recommended this place, is from Alabama and so I believe he has a pretty good grasp on exactly what good Southern Comfort food is. He said that this was the only place in the Austin area that he would even consider going back to for chicken fried chicken and chicken fried steak. Basically, that sounded like a place that I had to go to. So I invited Daniel, another intern in my group, and we headed off. He was kind of surprised that my roommates didn't want to come... so I thought that might be a little bit awkward, but luckily it was fine.

It helped that the food was... absolutely amazing. I am not sure if this is what food is like in the southern part of the US, but if it is I certainly understand why they have such bad obesity rates.

I got a chicken fried chicken plate, and got my choice of about a zillion sides(16) and chose Fried Okra, Mashed Potatoes, and Potato Salad. I will admit that the potato salad was probably not the best choice but.... I lost track of the sides and that was the only one that I remembered. 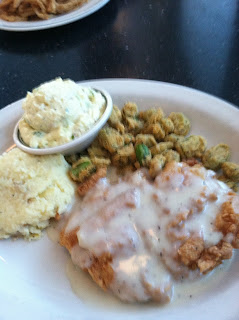 I was really really full but..... on the menu was Fried Strawberry Pie and there was absolutely no way that I could pass that up. I mean look at it! 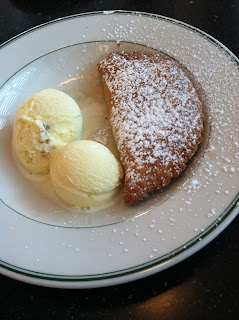 So yeah, if any of you are ever in the Austin area, I strongly recommend The Monument Cafe.

Sunday, July 3rd
As it seems like our new tradition is, we decided to go for a hike. Last weeks hike was pretty successful and so we figured that we should do it again. Ok... actually, it was something that was free and something that my roommates kind of wanted to do, so we did it. I sort of made them choose the place since I was frustrated that they never made any choices. So they picked McKinney Falls State Park, which is renowned all over the.... state? for it's falls.

This time Daniel and one of his roommates, Robby, came along, so it was a full ride. It was about a 30 minute drive to the park and then $5 per person to get it... which was a lot more than I was expecting.

The park ranger warned us that the river was a little low due to the drought but that we could swim in the river if we wanted to. None of us brought swimming gear though.... but we headed out for the Falls trail. 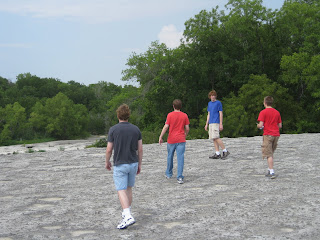 We almost immediately came across a really nice looking swimming pool and I really wished that I had brought my trunks. 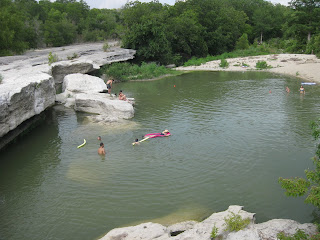 And of course, feeding into the pool was the lower falls, shown in all the powerful uh.... glory in the picture below. We had to be really careful crossing it as we could have been swept away! 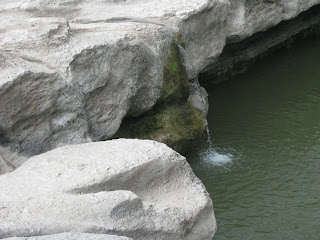 After that slight disappointment and me running the "Boy that sure is a powerful waterfall" line into the ground, we found the trail head and started off. The trail was basically a loop, and it started off with the ruins of the Grist mill... which... had something to do with grist? I am not positive, and I am too lazy to look it .... oh fine! It is a place that turns grain into flour. 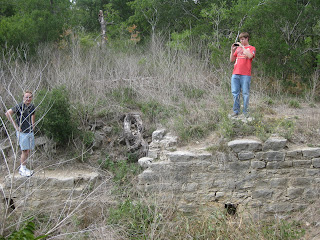 Just down from that we found a little path to a little secluded part of the river. Jacob did he best effort to run on water and made it to the other side of the river. 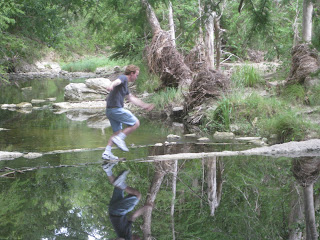 We found our way back to the trail and headed out. There was definitely a lot less exploring on this trail than on Bull Creek, but mainly because he sort of had the whole dry creek bed to walk on. We did explore a little bit and even found a wild blueberry bush. The berries were ok, certainly not sweet at all, but edible, and a week later I am still not sick. 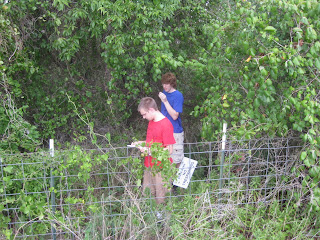 Jacob has a distinct hatred of using maps and GPS as you can see from his grimace of hate as he looks at my phone which Kyle is using to verify exactly where we are on the trail. 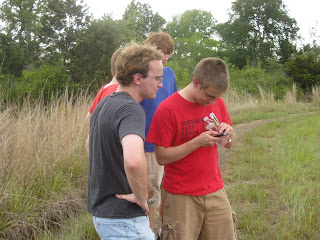 This trail had a lot of different plants and regions of vegetation on it. One example was the cactus, which only occurred on the first part of the trail and as you can see had some buds... or ... something. There was also some regions that seemed like forest and some that were more marshy. It was an interesting hike. 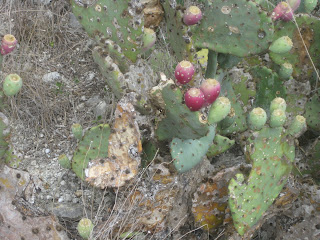 While this trail was not nearly as excited we made pretty good time and were some back to the trail head where the ruins of the homestead home were there. The place had been gutted by a fire and was really fairly small, but it seemed pretty nice for an old home. 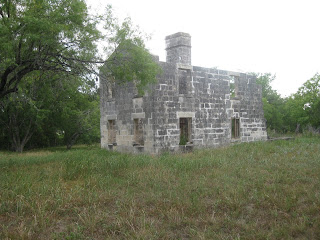 After our hike, we thought that the upper falls might be more powerful and waterfall like... we were... mistaken. 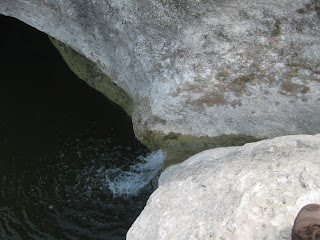 We did a bit of exploring and everyone else climbed out into the rocks in the middle of the river. which was pretty easy to get back from. 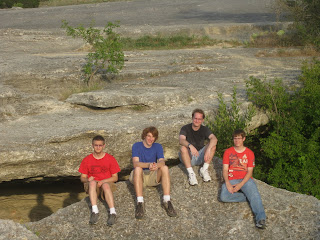 Daniel however.... decided to be just a little bit more adventurous and leaped down onto a rock in the middle of a swimming hole by the upper falls. He then became stuck and we spent the next 14 minutes or so analyzing how to get him up before finally just pulling him up. It was kind of a ridiculous scene and inspired the attention of a couple of girls, who I believe filmed the whole thing. 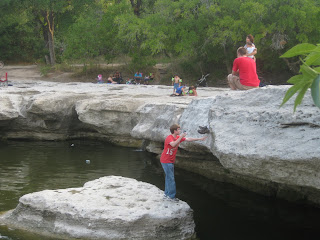 After the rescue we headed home for the day. This hike wasn't quite as fun, but it was still a pretty good adventure.


Monday, July 4th
Sadly in Texas fireworks are completely banned, which meant that most of the events for the fourth were cancelled. There were supposedly a few fireworks shows, but they were kind of far away and I didn't want to drive all that way and have it be super packed. I was a little sad that I didn't get to watch fireworks, but I suppose it wasn't that bad.

Kyle, Jacob, and I went to the intern BBQ that was held at the pool at our Apartment complex. It was actually a really good crowd and was mostly just a bunch of interns hanging out, grilling burgers and swimming. It was pretty low key, but was fun as well.

Other than the BBQ the most exciting thing that we did was to go shopping .... not quite exciting enough to talk about.

Tuesday, July 5th
So as I mentioned, our main plan was to go to Schlitterbahn, which is a water park that is about an hour south of Austin. We figured that Tuesday would be a good day to go and that the park wouldn't be very crowded. In some respects we were right... however.... it was still packed. So I am not sure that it really made much of a difference. I wasn't brave enough to take my phone or camera on any of the rides, but luckily I was able to create some mock ups that showed what we did.

We started at the old park, which was nicely shaded and had some slides and tube rides. They weren't as exciting or cool as the new rides that have been built recently, but the park itself was much nicer and they used the river very effectively. Even emptying a few rides out into it. We spent the first part of the day there.

Probably one of the coolest rides was the speed slide, where we got going up to maybe 30 MPH going down it. It was so fast that I just had to close my eyes on the way down, Kyle managed to scrape up his elbows trying to slow himself down, but here he his showing how best to hold your elbows to avoid that sort of thing.

The second part of the day, which was the majority, (2-8 PM) was spent in the new park, where all of the really cool tube rides were. This was were the crowd made it hard. I think that we spent probably about....3.5 hours just waiting in line, which was a lot, and kind of dampened the day. The first big ride that we tried was the Wolfpack... which I strongly advise not to take unless the line is really really low. It is sort of slow and windy and just not very fun. We stood in line for like.... 2 hours for it. I was very very disappointed in it.

However, the other rides were amazing! The master blaster was great and is sort of like a roller coaster only in water. We were carried up and around and down all the while being splashed and soaked. You had to be careful to not let your butt drag too low or it would sort of bounced as your swept around.

As you can see from the below pictures. We had a really awesome time! 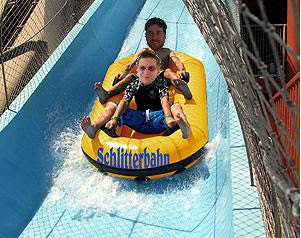 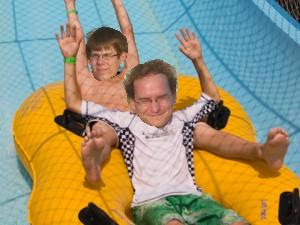 The other awesome ride was The Dragons Revenge. I actually think this was the one wait that I enjoyed in the new park... well partly enjoyed. The split the wait up, where you first waited at the bottom of the hill to get a tube and then walked up the hill with the tube expecting to get to use it... only to be very disappointed and have to wait in another line. But at least the top line was interesting and there was lots of water. The ride was also pretty awesome. A lot like Master Blaster, with some uphill and very roller coaster like. There was supposed to be a spinning tunnel and a dragon projected onto a wall of water. Sadly, that was broken.

After that the only thing that remained was for Jacob to try the surfing, which he did pretty ably 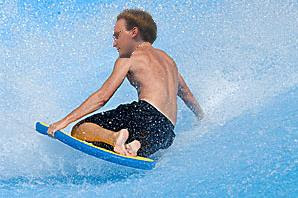 And that was the weekend, it was long and fun, and also sort of hurt my work week, which was short and I had trouble focusing on it!
Posted by The Elephant at 9:02 PM 1 comment: