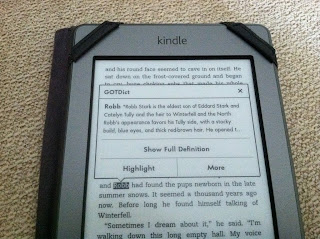 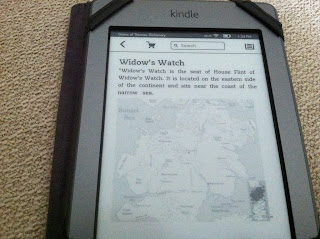 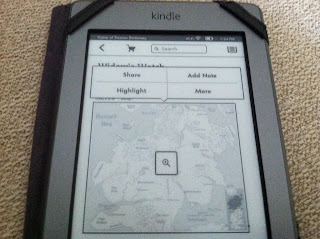 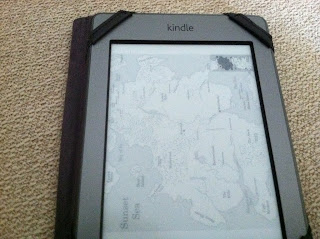 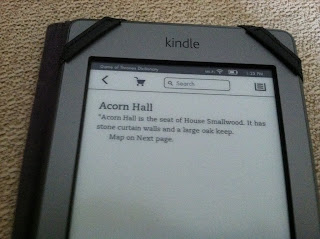 The information that I used to create this dictionary, which was the Song of Ice and Fire wiki, is covered by the creative commons.
http://creativecommons.org/licenses/by-sa/3.0/
Posted by The Elephant at 3:01 PM

How do we make this thing go viral? There must be thousands of folks out there that could use this.

1. I think you should mention the despoilering in the README. If someone got the files but didn't see this blog post, I could see them not using it for fear of spoilers.

2. Have you thought about creating a GitHub account and putting it up there? That has a few advantages: First, its social features might help bring it to more people's attention. Second, people can submit patches to you (you can review them before accepting or rejecting).

Hi ! Thank's for the good work you did on this. I'm reading GOT in French and I cannot select your dictionnary as the default dictionnary for French, is there any workaround ?

Hi! Thanks for your interest. I am not sure if this will work, but I tried setting it as a French dictionary. I am not sure the exact stuff to do. So if this doesn't work just let me know.
https://www.dropbox.com/s/rvgmj0u93vlai4u/GOTDict_FR.mobi

Hey, this is EXCELLENT and really helpful! I'm currently trying to convert this to work with a nook HD dictionary (it's a much larger pain-in-the-ass).

If your site is ready for the traffic it would generate (quarter of a million subscribers on those forums), have at it.

Thanks! I am glad you found it helpful. It you need the excel file that I used to create this let me know and I can share that with you as well.

Thank you so much, your trick made it, it works well !
This will help me let my smartphone away while reading.

A really nice work you did there, thank you! I always have problems remembering who all the characters are, so this is really helpful for me.
Just one question: If i set your GoT dictionary as primary dictionary for the english language i don't get the definition for english words any more. Only for the contents of your GoT dict. May this be because of my Kindle eReader (non-touch)?

Huh, yeah, I was very worried about that, but it worked for mine. I think one of my friends who tried had an older version of the Kindle and also didn't get the default English version.

There isn't much I can do about it sadly, other than adding an entire English Dictionary to the GOT dictionary.

Since english isn't my native language, i hoped this would work. I understand it isn't your fault, maybe i'll ask in the Amazon forums or write them an e-mail. My Kindle isn't that old (4th generation i think) and has the most recent firmware 4.1.1. So i don't see a reason why it should behave different than your Kindle Touch.
Just if no other way works: Would it be possible to join the Oxford Dictionary and yours in a single file?
Thanks again for your work!

Sorry, I don't own a nook and can't test it, which makes it rather hard to make. As the commenter above said, it is much harder to do as well. If you would like to take a shot at it I can certainly give you the excel file that I used.

Hmm... maybe I just got lucky and it isn't actually supposed to work. That would be a little annoying.

Anyway, it would be possible to merge the GOT dictionary with an English Dictionary. I am not sure what merging the files would be like though.

I CAN'T EXPLAIN HOW AMAZING THIS DICTIONARY IS. AND ALSO HOW MUCH I APPRECIATE THE WORK YOU HAVE PUT INTO THIS . THANK YOU SOOO MUCH. GOD BLESS YOU.

Thanks! I am glad that it was helpful for you. :)

first of all congratulation for your effort.
I just bought the new Kindle paperwhite 2nd edition.
With the previous version of Kindle, having your dictionary as default, when I pressed on a word that was not on your dictionary, it would show the definition on another dictionary (e.g. Oxford).
With the new Kindle, I cannot manage that. Do you know why this happens?

Hmm... That is a little annoying. I don't have a paperwhite, so I don't know exactly what is going on, but the link below might be useful.
http://learnoutlive.com/how-to-change-dictionaries-on-the-new-kindle-paperwhite/

It is kind of an awkward way to get around the issue, but it might work....They also changed how dictionaries work on my version so things are no longer as slick as they used to be. I might go back and rework this to try and make a better version.

According to
http://www.mobileread.com/forums/showthread.php?t=228552
they have removed the ability to change between dictionaries in the New paperwhite.. What a stupid move..
Thanks anyway for your immediate response.
Happy new year!

I just got a Paperwhite on Monday (4/29/14) and can confirm that this still works just fine and is awesome! I didn't see it in the list of dictionaries at first, but then realized I hadn't gone deep enough into the menu. It looked like it only had the Oxford English dictionary, but once I clicked "English" it gave me the other dictionaries. (Main Menu / Menu / Settings / Device Options / Language and Dictionaries / Dictionaries / English / GOTDict etc)

Thank you so much for putting this together! It's been a year or two since I finished the fourth book, so this dictionary is extremely helpful now that I've finally started the fifth. Kudos!

Awesome! Glad to hear that it works with the Paperwhite!

Great! I am glad it has been helpful. I contemplated making spoiler versions for after each book, but that was way to much work. Perhaps when Book 6 comes out, since I will probably need it for myself. :P

Hi! I have just downloaded your dictionary.. Great work!!!!
One big question: I read the book in english but speak spanish, so I do need the english dictionary too. Is there any way to integrate both dictionaries in one?
Thanks a lot!

Hmm.... Integrating the dictionaries would be a lot of work, mainly because I can't modify the default English Dictionary. If your kindle is currently using a spanish dictionary, then this dictionary cannot be selected as a default for that. but there is a workaround as I can compile a new version that will work as a Spanish dictionary. I don't know that that will do to anything else though. If the dictionary doesn't work as is let me know and I will make a Spanish version.

I couldn't use it, maybe because it's in english and my kindle and my digital copy are both in portuguese (BR) :(

Could you provide the source code, so I can compile in another language?

thank you so much

Hello,
This is great. I'd like to use it on my Kobo. Could you possibly provide me the source code?

This is great! Thank you!

Thank you very much for your great efforts.

doesnt x-ray already do this?

you are awesome man. thanks for all the effort

this is very great. :)
i was searching for this because I thought there must be a very nice person on the internet that did exaclty that. what can i say i wasnt disappointed. Thank you!!

Is there an easy way to edit only the dictionary into another language? I want to build it in Brazilian Portuguese. Great Job!

How and where can I get this dictionary . Its not available in the link anymore , please help I need to navigate the GOT world better .

There's a new version of this at https://gotdict.wjdp.uk