This Saturday (6/29) I took a trip to Dallas with one of my roommates and two friends from work.  The plan was to first go to Medieval Times, which is sort of a show where they do jousting and medieval stuff.  I don't quite know how to succinctly explain it.  Hopefully this post will make it more clear.

It was a bit of a drive, but we arrived in perfect time and we got there about 15 minutes before the show, which wasn't bad at all.  We walked up to the "castle" and prepared ourselves for the excitement to come! 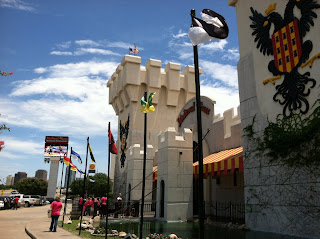 Luckily we were invited guests or we might never have been able to cross the dangerous moat which was filled with several vicious koi fish. 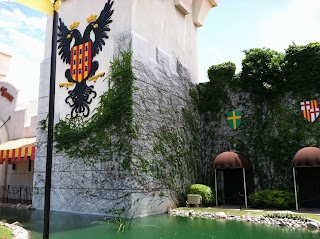 Once we got in they took two pictures that they would later try to sell to us for $20.  The first picture was just us with the falconer.  The second picture they dressed us all up in costumes and gave us weapons and shields.  For some reason I got chosen as the king, so I got a crown.  It was kind of a strange process.  They called us all lords.  It was m'lord this and m'lord that.  I guess that it was just all to stay in character.  We decided to buy a bottle of wine and the guy who took the credit card tried acting like the card reader was magic.  It was.... interesting.

Anyway, then we got in and checked out the lobby area.  The King was lounging on his throne, as shown below.  There were also places to buy souvenirs and drinks, but the drinks were kind of insane.  To get a beer or mixed beverage you had to buy it to keep the cup, which meant that the cheapest drink was like $16.  I suppose then you got to keep the cup.... but it seemed like a really big waste of money. The bottle of wine for $20 actually seemed like a great deal in comparison.  The wine wasn't amazing, but it was almost as much as one glass of beer.

The highlight might have been the horses stable where we discovered that there was a white horse that was called... blacky! I just thought that was pretty funny. 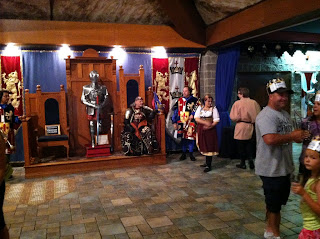 Everyone got little crowns, (which looked like Burger King Crowns), that signified both where they were sitting and the knight that they would root for.  We got assigned the yellow crowns, so we sat down and settled in.  Here the other guys in our seats with the crowns. 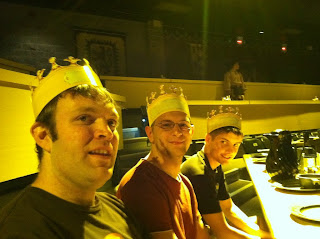 I took a panoramajama of the arena.  We were at the far end, which meant that we were the farthest away from the king and princess.

If you would like to view the panorama in an interactive viewer you can use the link below:
Arena Panorama

Our first course was tomato bisque soup, which was served in a little bowl with a handle.  This is due to the fact that we are not allowed to use utensils!  We also had a choice of drinks, which was either coke or unsweetened ice tea.  I didn't want either..... I didn't ask about water, but I just stuck with the wine. 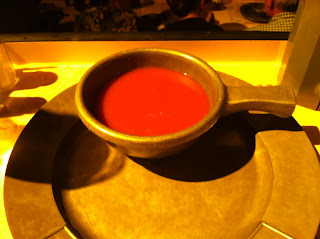 Soon our knight came out, as shown below.  He was a young knight, but he seemed pretty competent, but he also seemed a bit temperamental.  He always seemed disappointed at the other knights.  After some wine it was pretty easy to root for him. 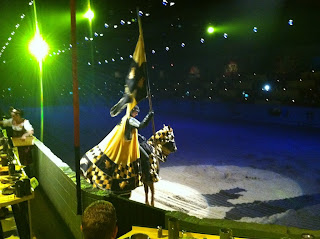 Once all the knights came out, there were six in total, the king and all the servers came out and marched around and we got a little speech welcoming us and telling us who people were, like the captain of the guards and the Master of the Horses. 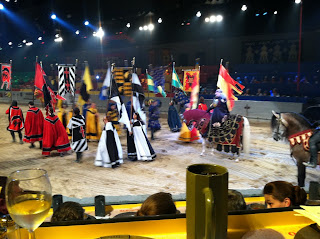 Everyone left the arena and the king went up to his throne and gave a bit more of a speech.  Then we got a little show with horses doing some tricks.  It was ok, I wasn't sure if the moves were all that amazing, since I don't know a lot about horses. 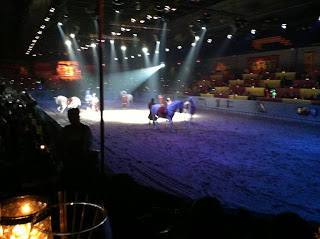 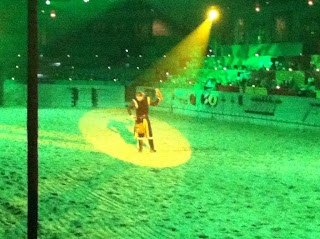 Then we got course number two, which was a very large piece of chicken! 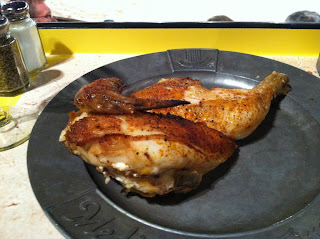 A little while later they brought out the other courses, which was two potato wedges and one rib.  The food was all pretty good.  It was a lot of chicken compared to the other stuff, but it was still tasty I suppose.  Again, we didn't have any silverware, so we had to use our hands to eat it. 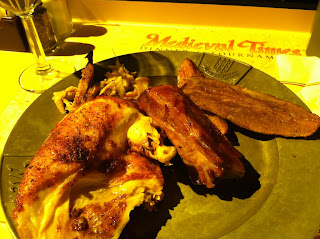 During this we got the main story of the show which was this herald who showed up from the King in the North and demanded the hand of the princess of the North would attack.  The King denied him, and the herald left for a while.

Then we got several competitions between the knights. The first was a ring game where the knights rode their horses and tried putting their lances through the ring to catch it.  All the knights won, so they all got flowers.  They rode to their specific areas and tossed out the flowers to their fans.  Our knight almost tossed me a flower.... which was a little strange.... but he didn't Next was a weird lance target game.  They rode their horses down the arena and then slammed their lances into a target and got points if it stuck.  They all got it to stick, so all the knights won and all got flowers to pass to their areas. 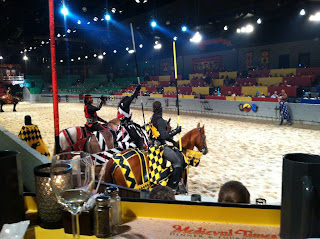 Then we got our dessert.... which was basically a McDonald's apple pie, but it was piping hot, so I suppose that makes it better.  It wasn't bad, but it was a little cheap. 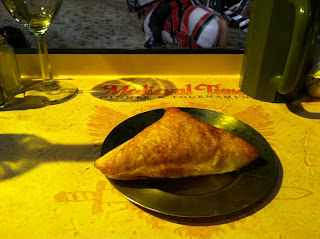 Then we got to the main event.  Jousting! .... Kind of real jousting!  Here our knight is all geared up. His squire is exchanging flags to signify... something. 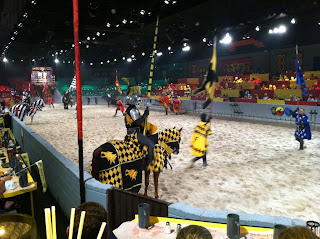 The joust was interesting, though not incredibly realistic.  Instead of describing it, I took a video

I didn't realize there were so many videos of this stuff on youtube... but I swear that I took this!

After that he fought the herald from the King in the North to the "death" to determine if the North would attack.  Luckily, the Red and Yellow knight won and the kingdom was saved.  I almost wished the bad guy won, since at least that would have been exciting.... then we might have seen a war!

After it was over we headed out to the Rangers game.  We were about an hour early, which wasn't too bad.  Here is the entrance to the stadium. 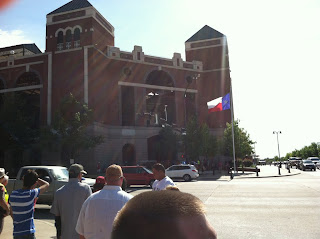 Here is Dave in his Reds jersey.  He was in enemy territory! I was totally worried that we were going to get attacked! (Not really) 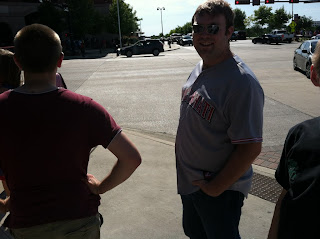 Anyway, we were early, so I decided to walk to see the Dallas Cowboys Stadium (or at least get close to it) Everyone decided to join me, which I kind of felt bad about.  The stadium is below, the picture doesn't really do it justice... it is really huge. 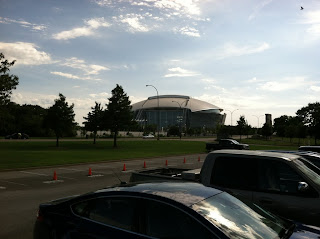 Here everyone is walking back to the stadium.  We got decent weather, it was only 95 degrees.... the day before it had been 106... so it was a large improvement. 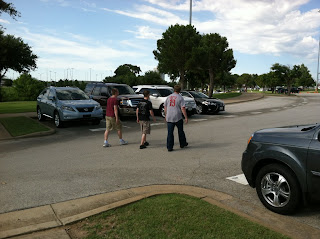 We found our seats, which were in the left field bleachers,  and I again took a panorama.

Here is the link to the interactive viewer.
Seats Panorama

I also took a picture with everyone. 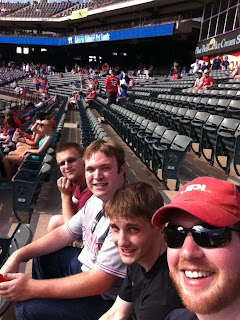 The picture below is of the best moment of the game, which was the sun going down behind the stadium facade.  This happened in the fifth inning, so basically half the game was really really hot. We were basically directly in the sun.  I had to take a trip inside to get some ice cream which helped a lot.  Luckily they let me bring in the water bottles that I brought.  This was very good.... since they sold small water bottles for 4.50 or about a 300% markup.  It almost felt criminal based on how hot it was. 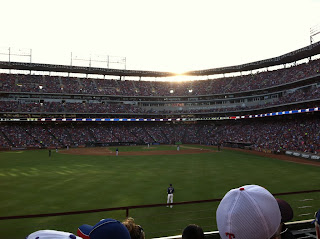 The game was fun.  I would say the rangers have a great ballpark.  They claim to be the loudest ballpark in baseball.  But I imagine a lot of parks do that.  They had some nice animations for things and some interesting games.  The best one was the whataburger contest where the contestants had to toss large foam fries into a fry holder.

In about the 8th inning Kyle and Dave got a boomstick, which was a 2 foot long hot dog.... it was huge.  They kept trying to get us to eat it... but I didn't have much appetite after sitting in the sun for most of the game. 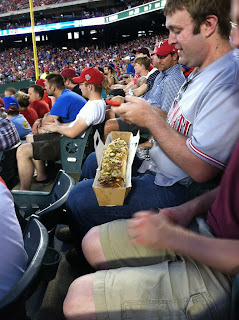 The reds won in overtime, which was good for Dave, but not most of the fans.  Greg and I were both cheering for the rangers... just because we needed someone to cheer for.  I certainly wasn't distraught that they lost.

After that we headed home.  It was a good day.  Pretty busy, but pretty fun.
Posted by The Elephant at 11:57 AM No comments: