Having recently moved to Texas, my ability to go to blazer games has been greatly diminished. However, this weekend the Blazers came to play in Dallas and Houston.  Emboldened by the fact that they were .. closeish, I wrangled up tickets and went on an adventure!

The first game was in Dallas at 7:30.  So I left Austin with my companions, Thomas and Nick, around 3.  Thomas was a fellow Blazer fan, while Nick was rooting for the Mavs.  We begrudgingly allowed him to come.

We made it to Dallas around 6 and had dinner at a pub/bar called the Angry Dog.  Here is a picture of an interesting beer I ordered.  I had never seen it before.... I actually really liked it. 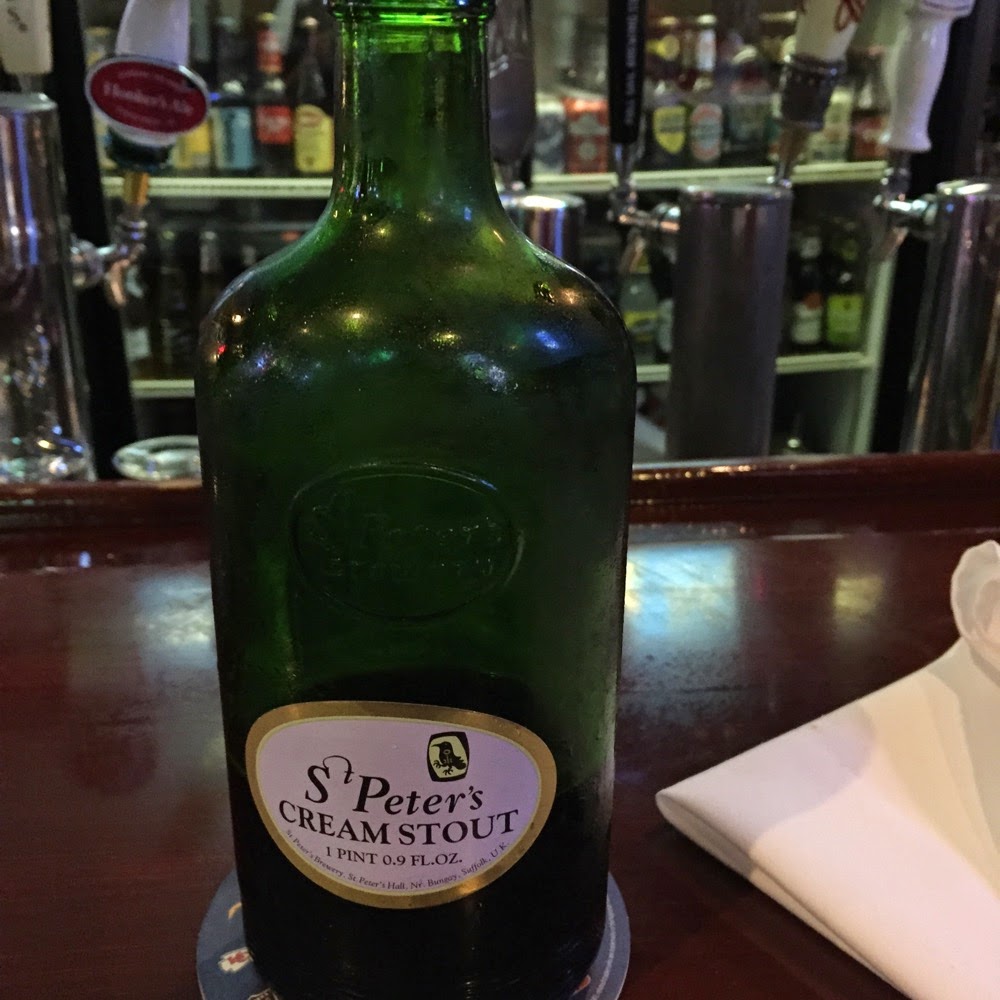 We were staying with Nick's friend, and he was kind enough to arrange an Uber ride for us.  It was the first time I had ever done Uber.  It went pretty smoothly for the most part, it was a little pricey, but we made it to the game almost on time, despite leaving for it at 7:25.

Our seats were in the very last row of the stadium, but at least we had a mostly full court full instead of from behind the baskets.  Here is a shot of the court from my seat. 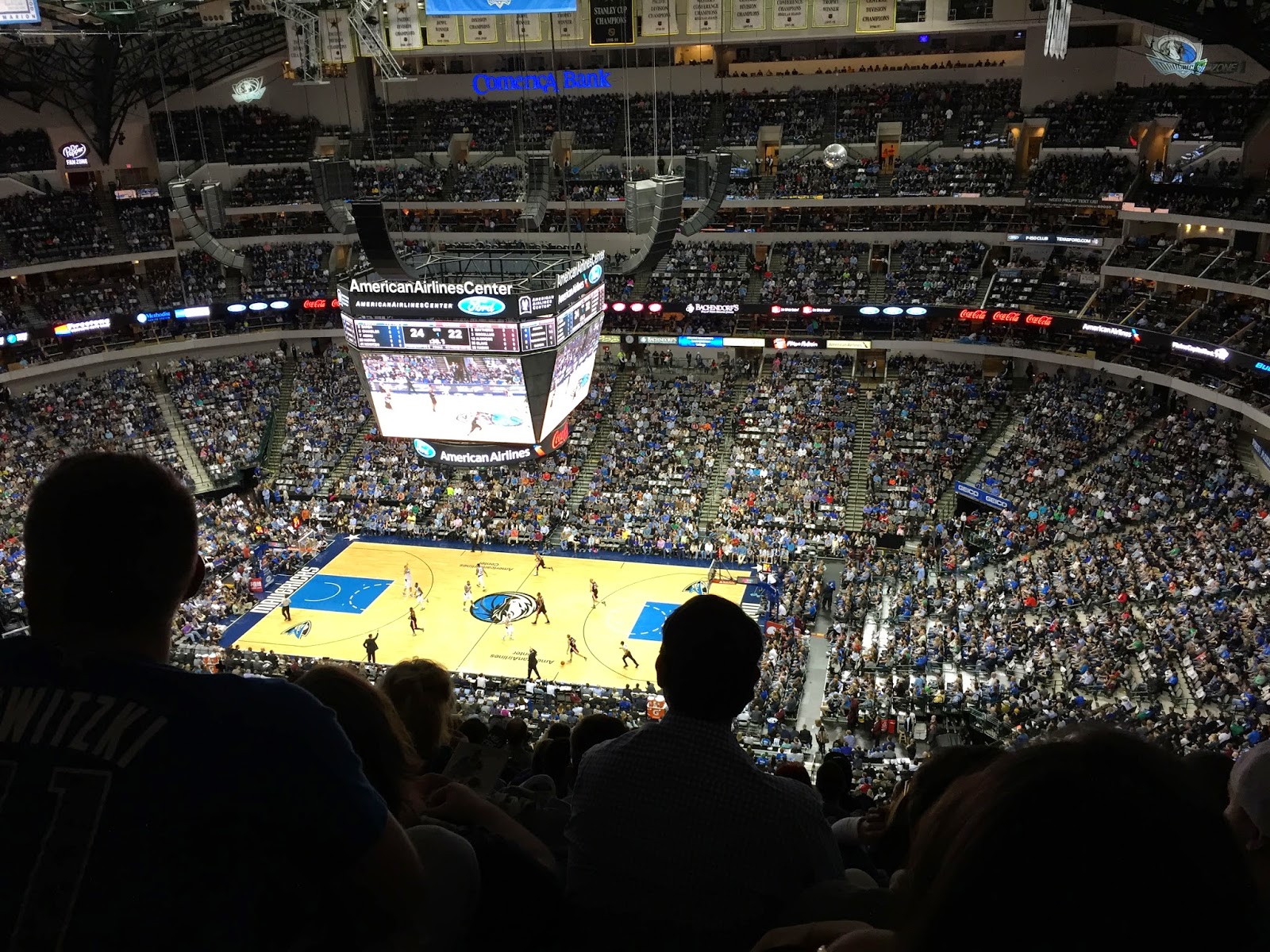 The game for the most part was very good... up until the 4th quarter when the Blazers managed to only score 14 points and allowed the Mavs to storm back from a 16 point lead and take the game into overtime.  The Blazers then got shellacked in overtime and we left depressed from a missed opportunity.  Walking out I commiserated with a few other blazer fans, mostly through head shakes and wry smiles.

It was a little crazy how many people left the game early in the fourth.  They probably felt a little silly once they saw the Mavs came back.  I usually try to stay til the end regardless of the result, though I suppose that I can understand trying to beat traffic.

For the halftime entertainment we got to watch George Clinton "perform", and by that I mean he mostly stood around while everyone danced around him.  He occasionally sang, but for the most part didn't do much, as is obvious from the picture below. 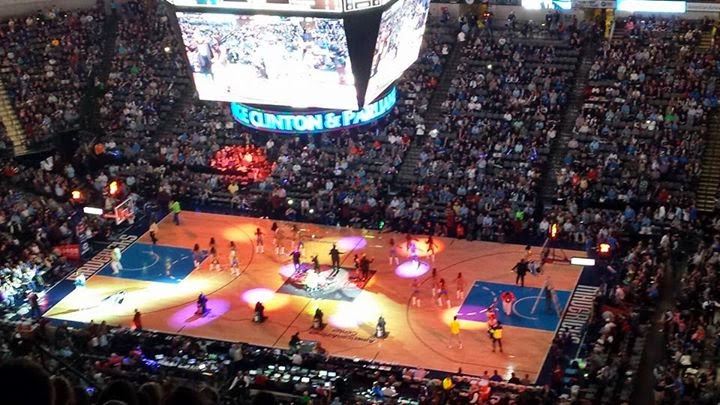 I didn't take many more pictures of the experience, and I was too depressed at the end to really take many more.  In general I really liked the in-arena experience.  Since it is Black History month they showed a lot of NBA facts about the early black players and that was really interesting.

One of the cooler aspects in the arena was the addition of a drumline, which I thought was pretty great.  It was also fun seeing Mark Cuban on the big screen.  I thought for the most part the fans were pretty good.  In the fourth quarter they got very loud and were cheering for the Mavs and may have disrupted the Blazers.

The coolest aspect for me was how much the city changed when the Mavs won.  Many of the buildings had animations or lights on them about the win.  The picture below shows Reunion Tower lighting up with the message Mavs Win.... which I took as we waited for our train. 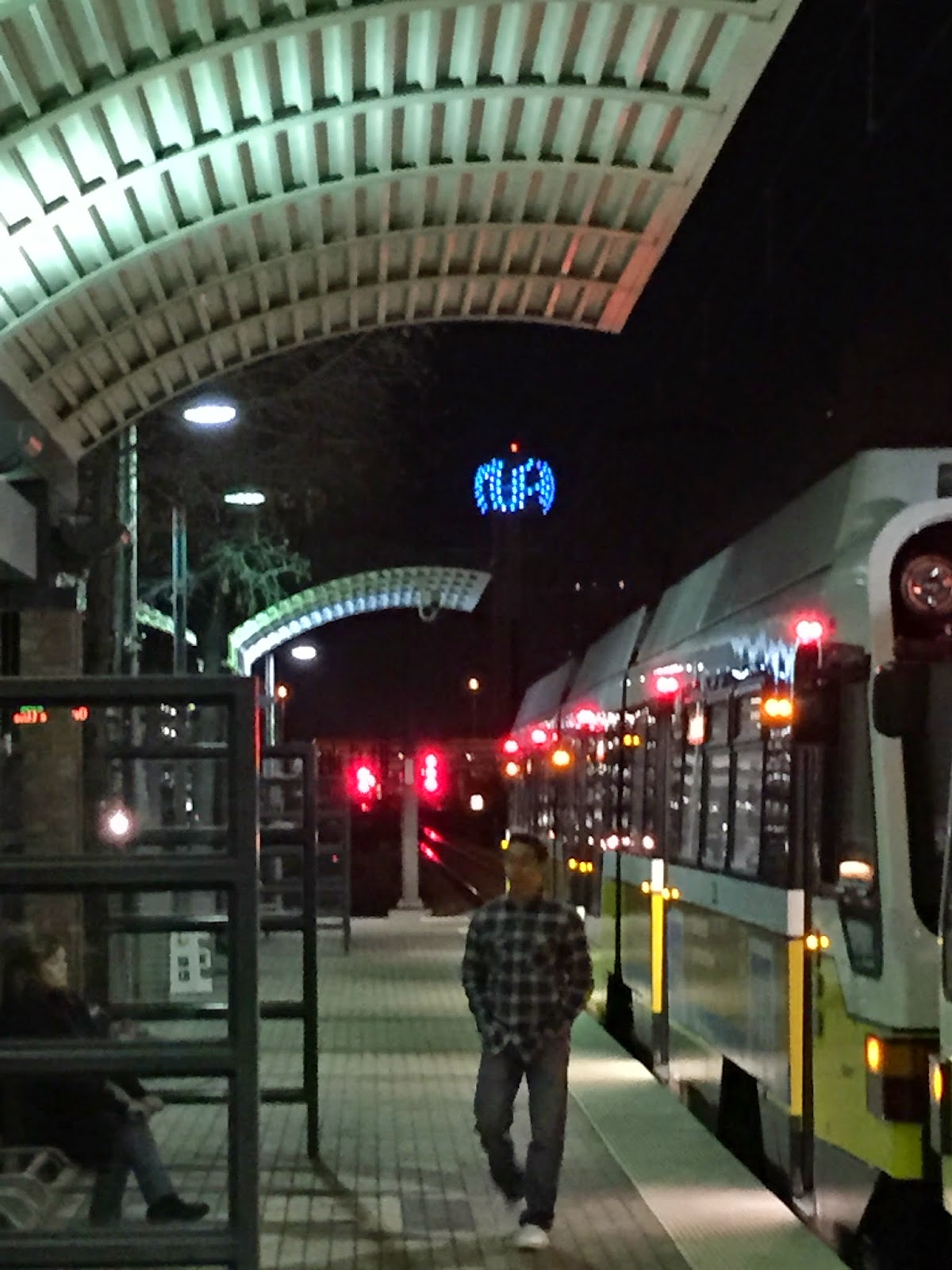 All in all... it was a disappointing start, but we got to explore Dallas a bit after the game, which made it slightly better.

The change for redemption came the very next day and luckily for Thomas and I, the Blazers won! If I could have only picked one win on the trip I definitely would have picked the Rockets game, so while the Mavs game was sad, at least the trip wasn't super duper depressing.

We did a lot of driving Sunday, and we got to the game around 5:50, which was about 10 minutes before the game.  Someone in the bathroom told Thomas to enjoy LaMarcus Aldridge while we could and that he was coming to Houston next year.  I doubt that... but the dude seemed pretty sure about it.

Here is the view walking to the stadium: 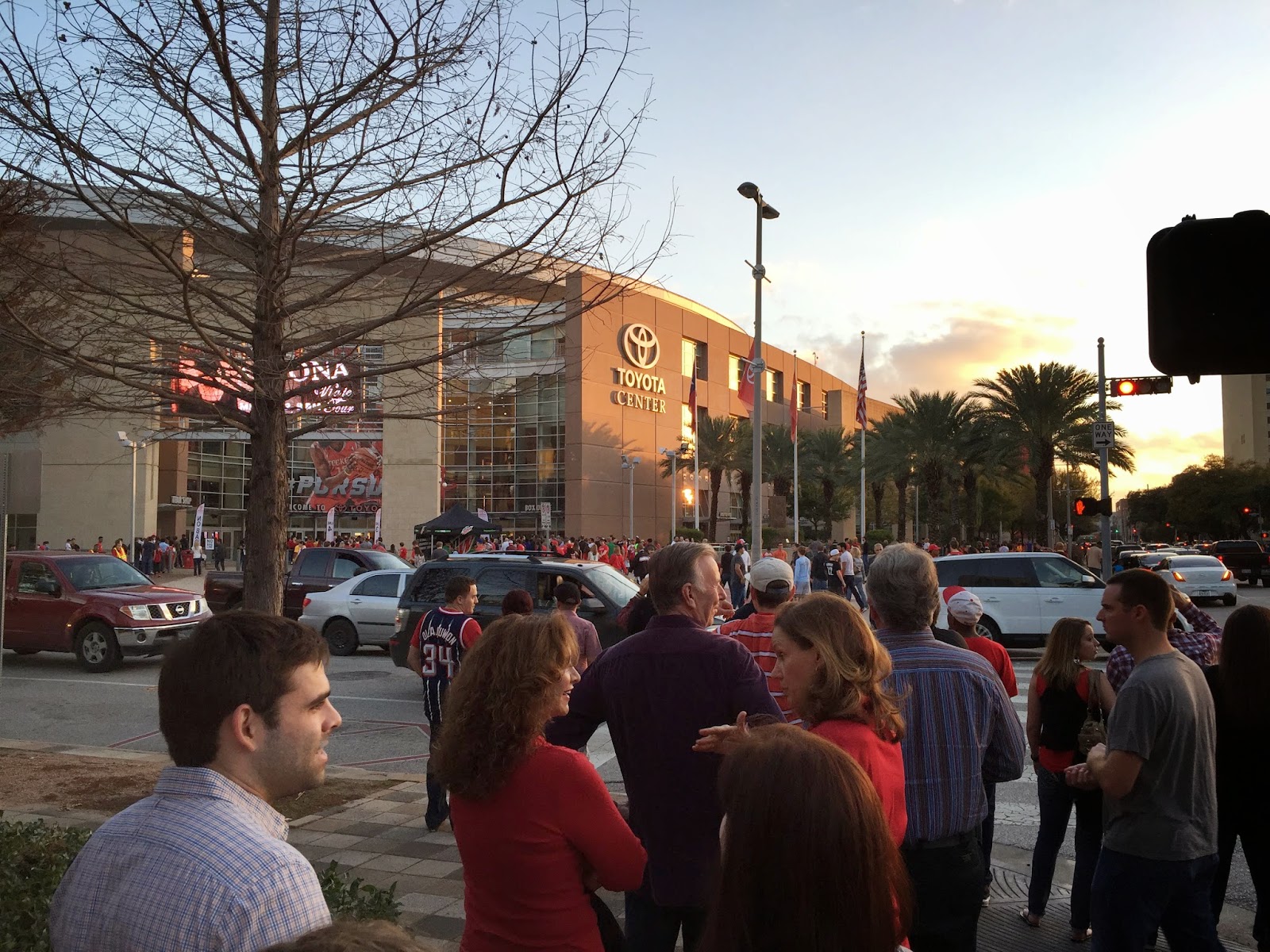 We had much closer seats this time, which was quite nice.  We could even see facial expressions! 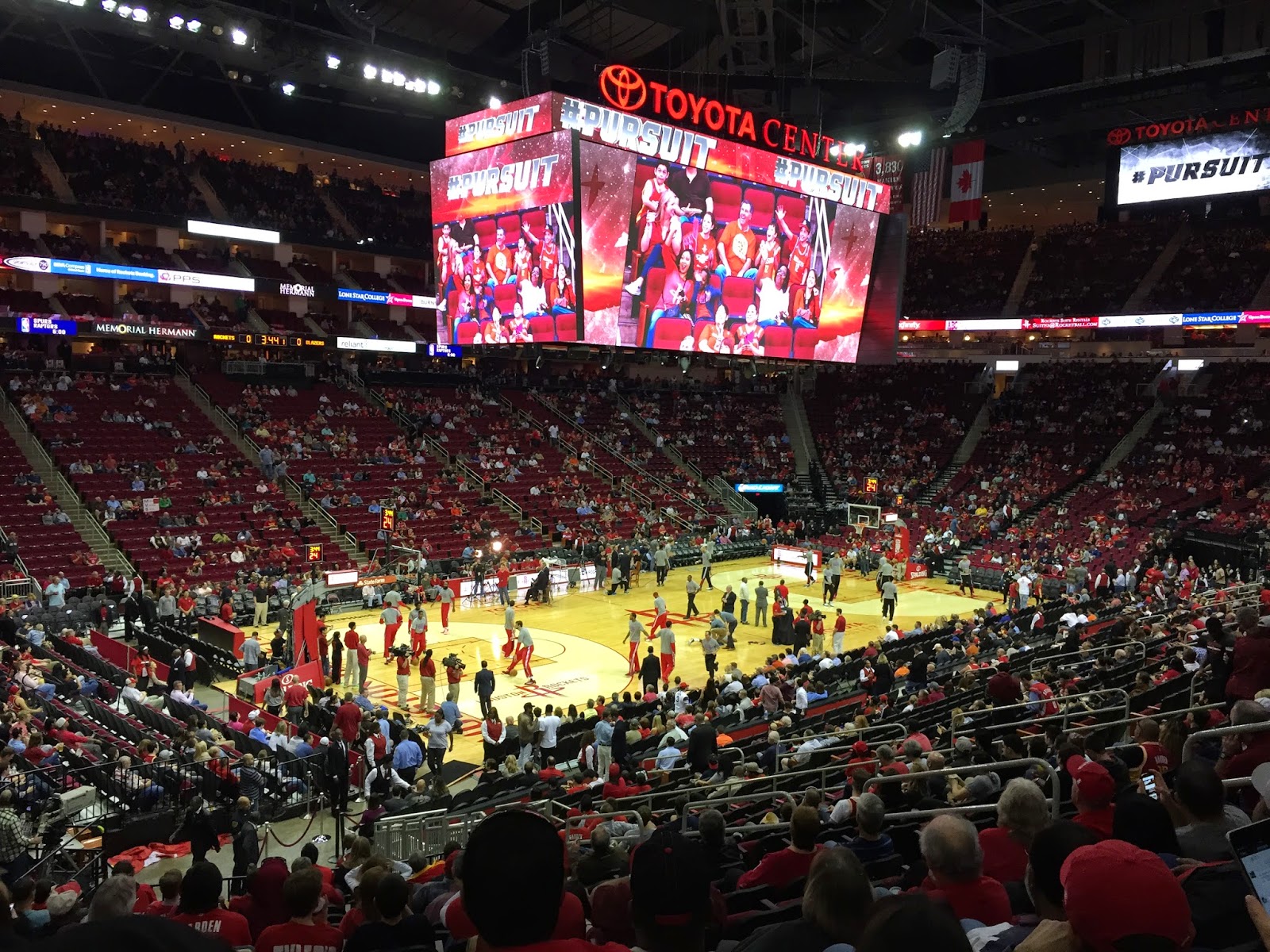 Robin Lopez has a grudge against all NBA mascots and his battle continued against the Rockets' mascot, Clutch.  Clutch confronted Rolo before tipoff and Rolo pushed him to the ground.  This is a picture of Clutch staggering away while Robin glares at him. 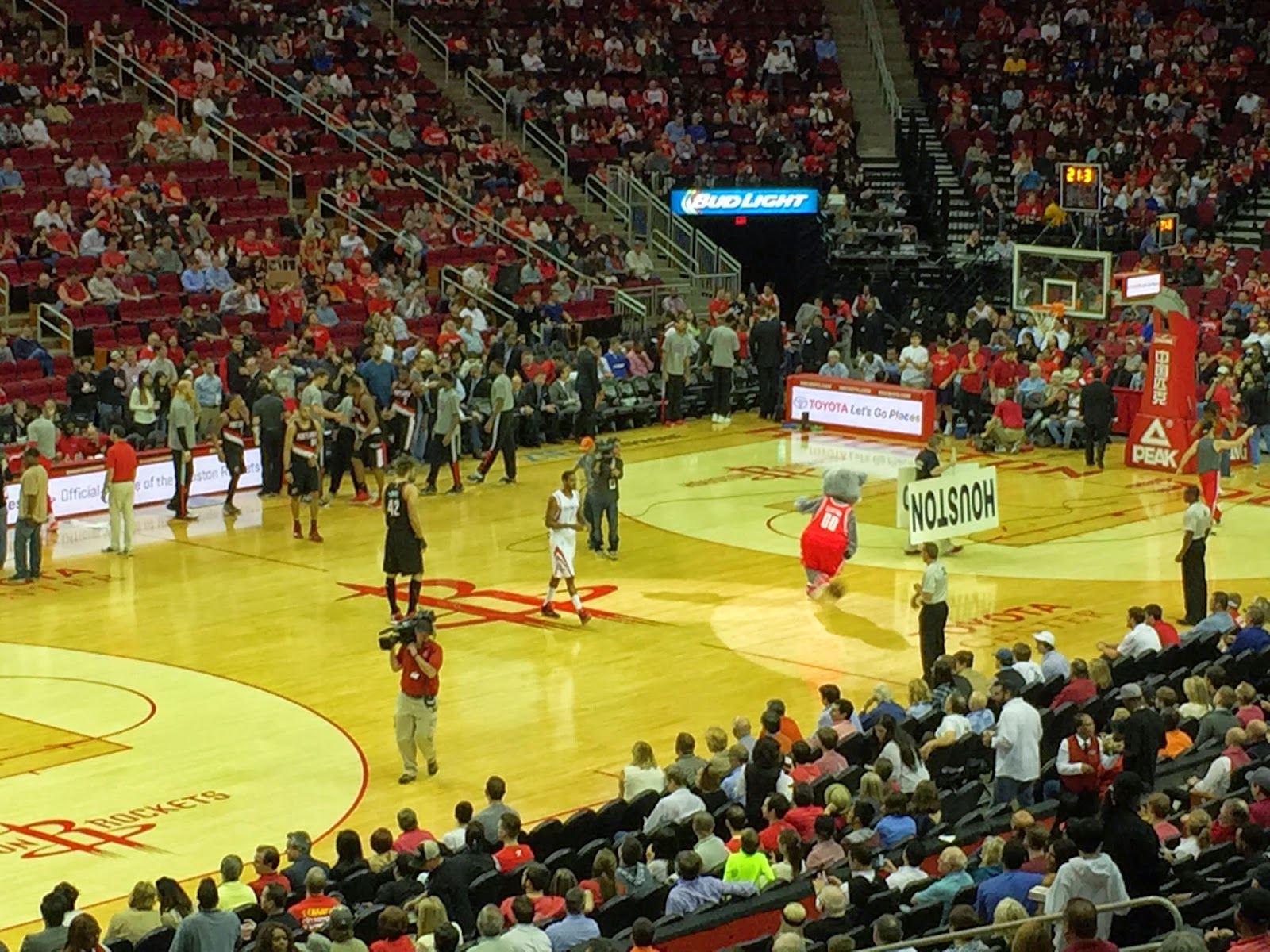 The first half was great for the Blazers, though it was very long as the Rockets got a gazillion free throws.  For our halftime entertainment we got... a bunch of teenage cheerleaders doing stuff.... it was... interesting. 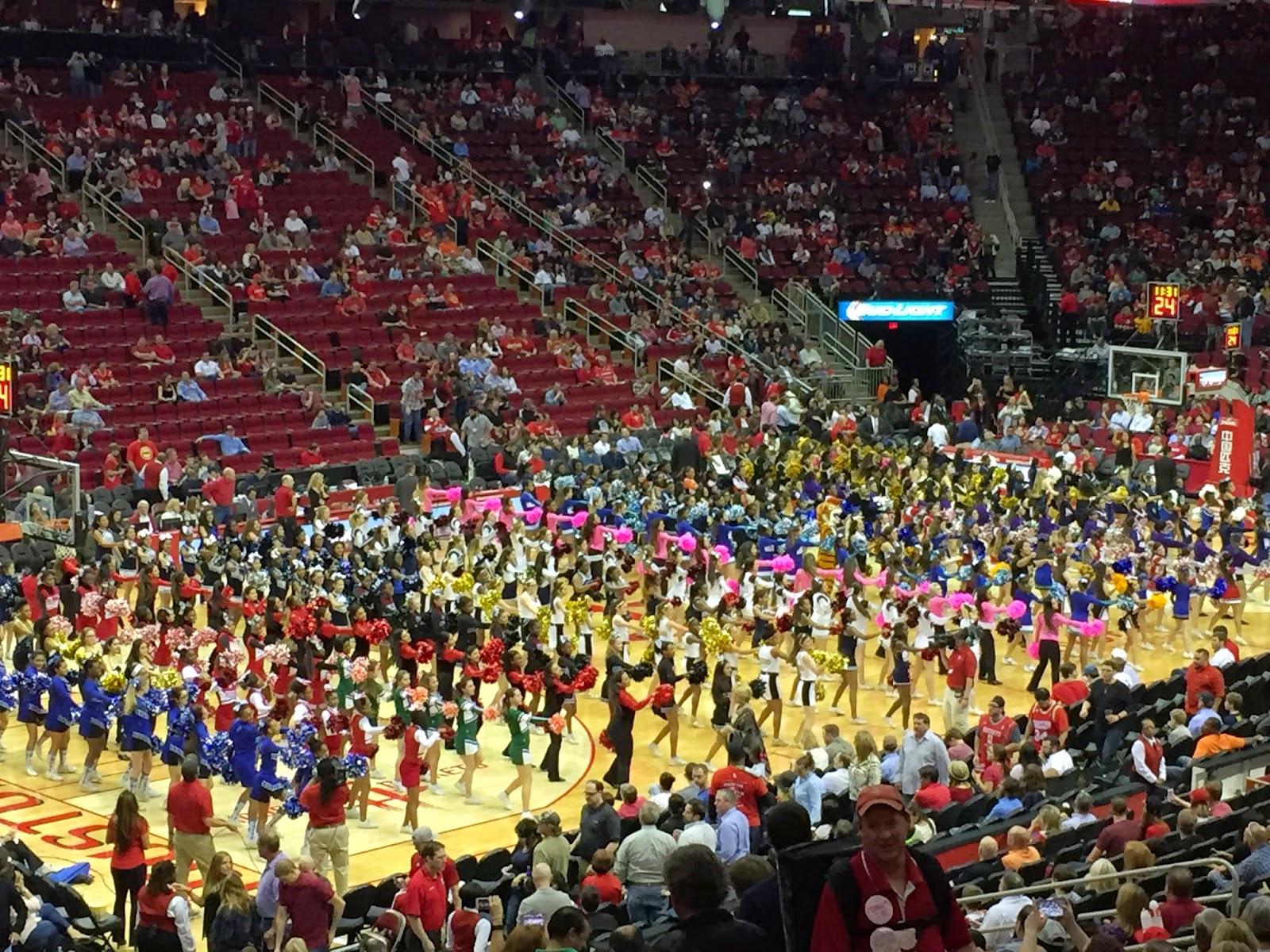 At the end of halftime, Clutch came out in Camo with a Nerf gun, clearly ready to confront Rolo again.  The confrontation did not go well for clutch. 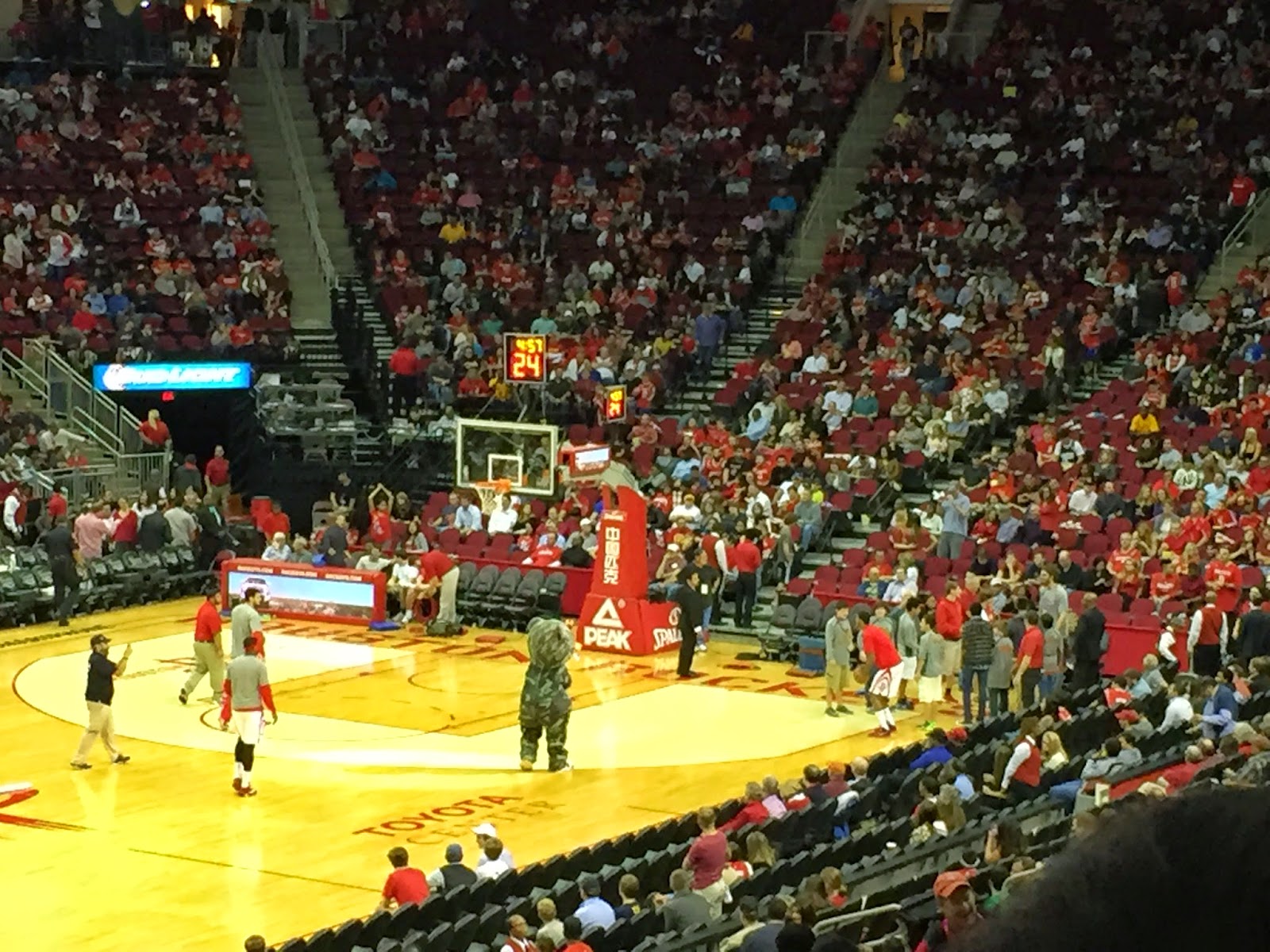 The video of most of this is here:

After this he gave Rolo a sideshow bob doll from the simpsons then tried to make nice by playing with a clutch doll.  Rolo kicked the clutch doll into the stands.

The third quarter was awful, and the Blazers, after leading by 13 at half, were only up 1 entering the fourth quarter.  Thomas and I were both pretty anxious, especially after what happened the night before.  Luckily, the Blazers gutted it out and emerged victorious, which was a very very happy result for us, but not for the fans of the home team.

There was one other Blazer fan that I saw, in our section anyway, and I high fived him with about 20 seconds left after the win was secure.  That was a fun experience.  I had never witnessed a road win by the Blazers, but I tried to have a mostly muted victory celebration. 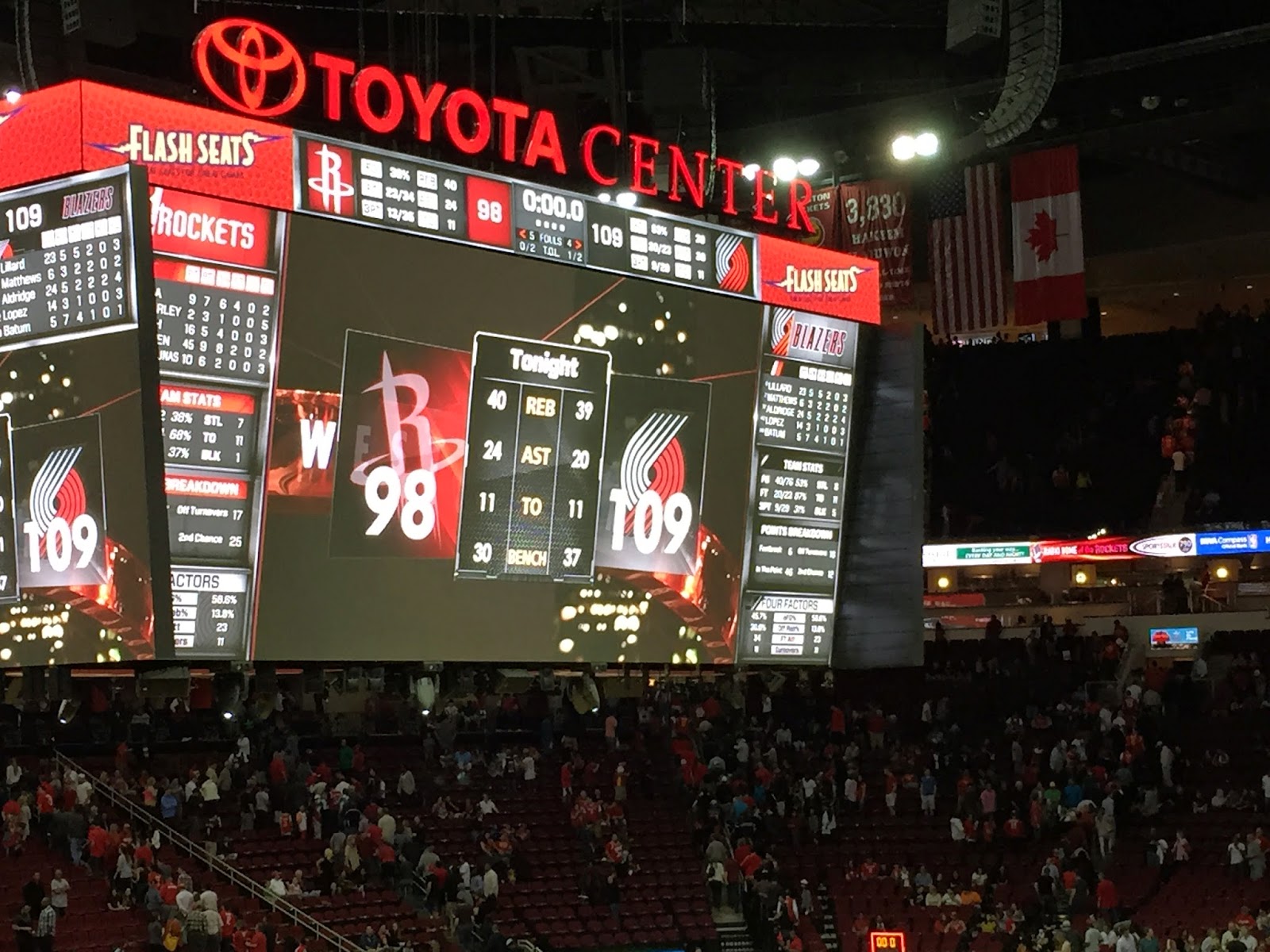 The fans in Houston seemed rowdier and louder than the Dallas fans, though that may have been based on where we were sitting. When Damian Lillard was introduced he was booed pretty lustily due to the playoff shot from last year.  The stadium announcer was very drab about anything the blazers did and would announce things like... Damian Lillard to the line for two shots, very slow and monotone.  Unless he wanted the fans to get riled up. Then he would say. Damian Lillard to the line for two NOISYYYY FREE THROWS!

The Rockets had a lot of video montages to get their fans loud and excited.  Mostly it was Dwight Howard flexing and yelling at them. The videos were incredibly effective and the fans got very loud and raucous.  I always felt like the videos were poorly timed since for the most part they were shown during a timeout right before the Rockets had the ball.

During the comeback though, the place was loud and rocking, and I was pretty worried that the Blazers were done for, so to persevere and win was pretty great.


The view of downtown Houston from the entrance of the arena was pretty stunning. 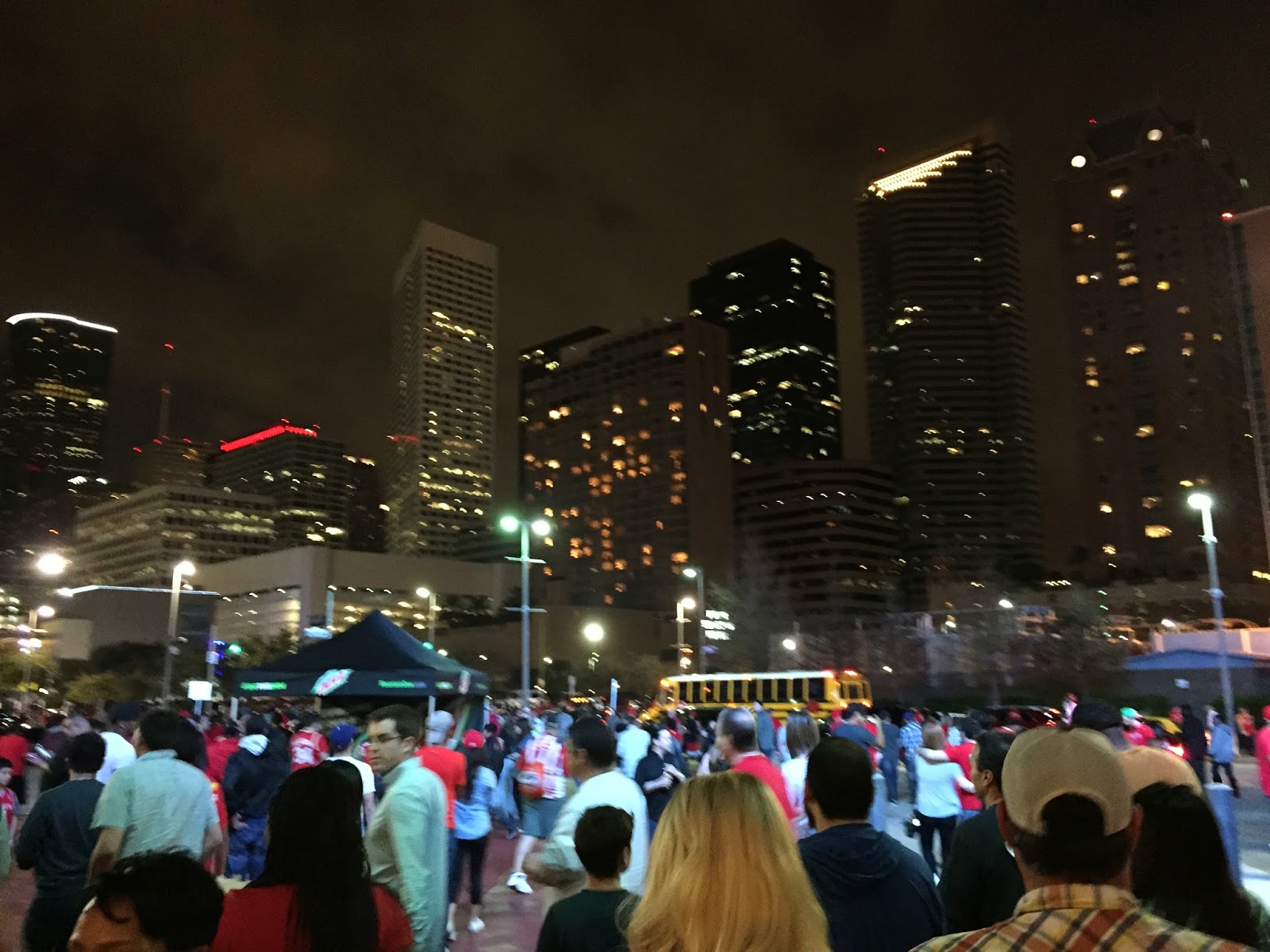 All in all, it was a really fun trip.  It was definitely a long weekend, but it was great to see the Blazers play and sort of explore the other places in Texas.  It was even better that the Blazers managed to beat the Rockets.
Posted by The Elephant at 9:52 PM 1 comment: